Please ensure Javascript is enabled for purposes of website accessibility
Log In Help Join The Motley Fool
Free Article Join Over 1 Million Premium Members And Get More In-Depth Stock Guidance and Research
By Jason Hawthorne - Apr 28, 2021 at 6:35AM

Precedent shows the best may be yet to come.

As the COVID-19 vaccine race unfolded and it became clear that vaccine candidates that use messenger RNA (mRNA) were at the forefront, concerns over the technology ranged from the reasonable to the truly bizarre. More than a year later, the overwhelming percentage of inoculations administered around the world have been from those same mRNA drugs. This is changing the way many are thinking about the future of drug development, and a few companies stand to become huge winners. One of them, BioNTech (BNTX 5.63%), is already making shareholders rich, and is in the perfect position to lead this new era of medicine. 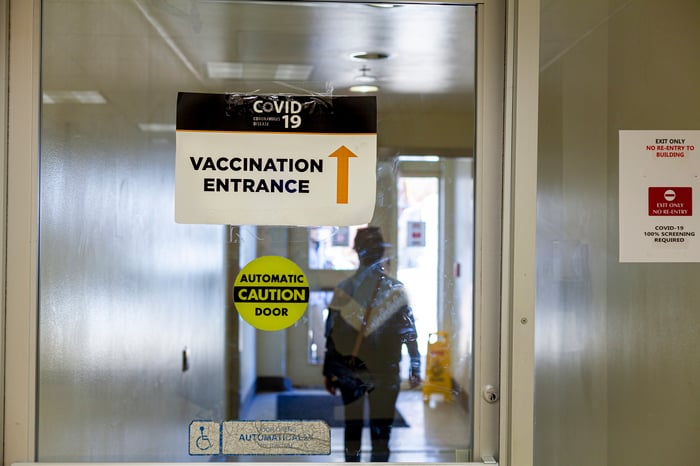 Investors who believed in the company founded by Dr. Ugur Sahin and Dr. Ozlem Tureci have been rewarded handsomely. Since the beginning of 2020, the stock is up over 400%. Even since the U.S. Food and Drug Administration gave the company and its partner, Pfizer, the all-clear with an Emergency Use Authorization, the stock has climbed more than 35%.

A past big gain doesn't mean there isn't an even greater gain ahead. That's especially true when a company has the potential to transform an industry. Just look at the incredible returns that Netflix, Tesla, and NVIDIA had even after a year that seemed impossible to repeat.

That isn't to say BioNTech is going to be the next multibagger even after a huge gains in 2020. However, it wouldn't be without precedent. The company has a technology that could change the industry and projects in the pipeline that could stoke investors' imaginations.

BioNTech projected $11.5 billion in vaccine revenue in 2021 based on existing supply agreements for 1.4 million vaccine doses. That number could turn out to be laughably conservative. The company expects to be able to produce 1 billion doses just in its own manufacturing network. Overall, the supply target for the year has increased to 2.5 billion doses. No one knows how long the pandemic will go on, or how often people will need to be vaccinated, but the cash will come in handy. The company has many other drug development programs it can now fund and as CEO Sahin put it in a recent interview, "we are well-prepared to spend the money."

Beyond vaccines for infectious diseases, BioNTech plans to leverage its mRNA platform for cancer vaccines, amplifying chimeric antigen receptor T-cell therapy, and encoding immunotherapies. Its personalized melanoma vaccine has had revolutionary results in early subjects. That treatment is the farthest along, despite only being in phase 2 trials. Its mRNA provided a boost to an existing treatment that shrunk tumors in mice for significantly longer than the current treatment alone. Human trials focusing on ovarian, uterine, lung, and testicular cancer are ongoing. All told, the company has more than 20 drugs in development. That means investors could benefit from several blockbuster drugs in the pipeline, but they will have to wait a few years for them.

Sahin certainly thinks it's worth the wait. He owns roughly one-fifth of the company and has said now is no time to sell. Ultimately, he says he envisions BioNTech as the next Amgen or Genentech, two companies that also ushered in a new era of medicine: biopharmaceuticals.

In an eerie case of foreshadowing, the CEO made a prediction to a room full of infectious disease experts in Berlin a little more than two years ago: If a global pandemic arrived, his company could use its mRNA technology to rapidly create a vaccine.

Turn the calendar to 2021 and he is happy to hold his net worth in BioNTech shares and has his eye on ushering in a new era of medicine. While the story will likely take years to play out, the biggest risk might be betting against him. It has been so far.