Please ensure Javascript is enabled for purposes of website accessibility
Log In Help Join The Motley Fool
Free Article Join Over 1 Million Premium Members And Get More In-Depth Stock Guidance and Research
By Zhiyuan Sun - Apr 28, 2021 at 6:17AM

This cannabis operator nearly quadrupled its sales last year. Can it keep up its momentum?

Cresco Labs (CL 5.77%) (CRLBF 4.64%) has been flying high over the past year. Through the last 12 months, shares of the No. 1 cannabis wholesaler in the country are up a whopping 180%. Despite its fast-paced developments, its stock is trading at an absolute bargain. Some investors think the opportunity to make millionaire-level money off Cresco Labs' stock is almost over. What gives? 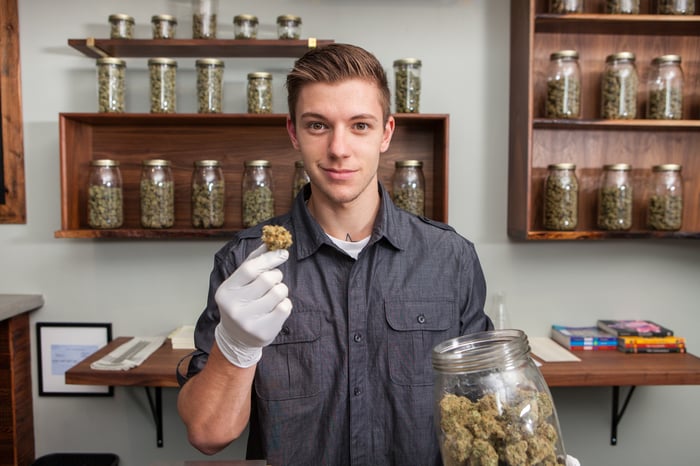 Last year, Cresco Labs' revenue increased by 271% over 2019 to $476.3 million. Simultaneously, its operating income less non-cash items (EBITDA) improved by an astonishing 1,350% to $116 million. The company is currently the largest wholesaler in the country; $274 million of its total revenue comes from the segment. Its catalog contains over 5,000 unique weed products which can be found in more than 920 dispensaries. Cresco Labs owns and operates 32 shops in 10 states.

Given the results, Cresco Labs looks ridiculously cheap. Its stock is trading at just 3.2 times forward revenue. Why? The company has relied on inorganic growth over the past two years. In 2019, it had just 100 million shares outstanding. By the end of 2020, that number had risen to about 384.8 million. It's hard to convince investors to buy the stock in the face of more dilutions, which suppress bottom-line gains. Most of the cash raised in its stock offerings went toward buying out competitors.

In 2019, Cresco Labs paid $823 million to acquire Origin House, a Canadian pot grower doing business in California. On Jan. 14, 2021, the company announced it would be expanding into Florida with the $213 million acquisition of Bluma Wellness. Bluma operates seven dispensaries in the Sunshine State, with plans to open eight more. It had the second-highest store sales in Florida, behind Trulieve Cannabis. The company also has a robust two-day statewide delivery service; 15% of its sales come from this segment.

On Feb. 16, Cresco Labs closed the acquisition of Verdant Creations. For $3.5 million in cash and stock, it added four additional dispensaries to its banner. The company was able to secure a rock-bottom purchase price as it bought the company during the height of the coronavirus pandemic, when many dispensaries were struggling.

Along with these deals came a massive pile of debt. Cresco Labs' long-term liabilities ballooned from $143.76 million in 2019 to $413.73 million. Luckily, it does have the means to service its liabilities and interest payments, as its operating margin improved by 38 percentage points year over year to 11.7%.

For the time being, Cresco Labs' growth remains sustainable. This is because of the massive demand for pot across the country and the opening of new markets like New York. I could envision the company becoming a millionaire-maker stock over the next few years. However, investors may want to plan their exits eventually, as the current business model mandates that Cresco Labs keeps growing. It is quite susceptible to declines in demand (say, from market oversaturation) as it needs those sales gains to justify the value of new acquisitions.