Please ensure Javascript is enabled for purposes of website accessibility
Log In Help Join The Motley Fool
Free Article Join Over 1 Million Premium Members And Get More In-Depth Stock Guidance and Research
By Leo Sun - Apr 28, 2021 at 10:00AM

The chipmaker's largest-ever deal will help it expand beyond far beyond mobile devices.

Skyworks Solutions (SWKS 2.87%) recently agreed to buy Silicon Laboratories' (SLAB 2.41%) infrastructure and automotive unit for $2.75 billion in cash. Skyworks expects the acquisition to be immediately accretive to its earnings after it closes in the third quarter of 2021.

This acquisition isn't surprising, since Silicon Labs' infrastructure and automotive chips would complement Skyworks' other wireless chips. But more importantly, it could reduce Skyworks' dependence on Apple (AAPL 2.14%), which accounted for 56% of its revenue in 2020. 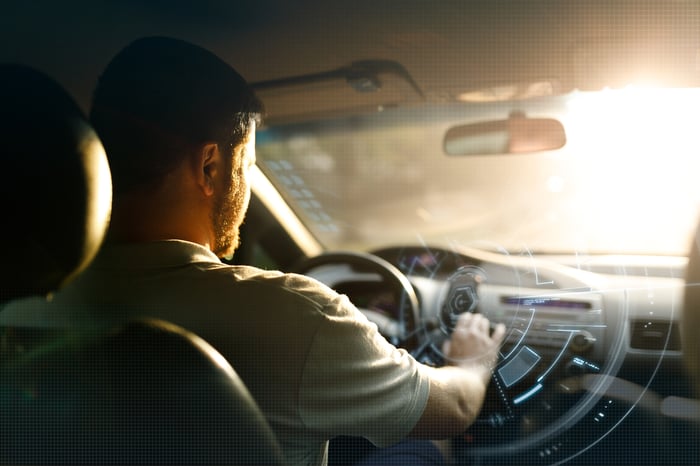 How will this acquisition complement Skyworks' business?

Skyworks manufactures a wide range of wireless chips for the mobile, automotive, home automation, wireless infrastructure, defense, and industrial markets. As data connections improve between these devices and the internet, they'll need an increasing number of wireless chips.

For example, Skyworks expects each 5G phone to contain $25 in front-end chips, compared to $18 per 4G device and $8 per 3G device. It expects 73% of all cars to ship with cellular connectivity by 2024, and for each autonomous vehicle to require about $50 in RF (radio frequency) chips.

Skyworks expects other markets to follow the same trajectory, allowing it to gradually diversify its core business away from mobile device makers like Apple. 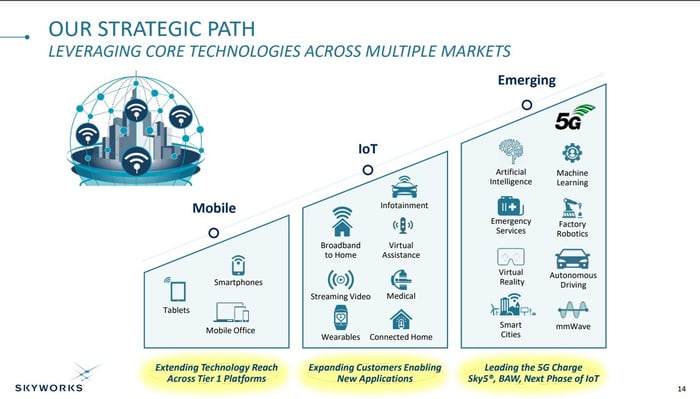 Skyworks doesn't break down its revenue by each end market, but it's repeatedly highlighted the auto and industrial markets as key growth engines.

In the industrial IoT (Internet of Things) market, Skyworks sold more chips for smart cities, critical medical applications, and wireless base stations. Analysts expected those tailwinds, along with Apple's rising iPhone sales, to boost its revenue and earnings by 47% and 67%, respectively, this year.

How much of a boost will the acquisition provide?

However, those estimates will likely be revised after Skyworks buys Silicon Labs' infrastructure and automotive unit, which grew its revenue 7% to $373 million in 2020. That's equivalent to 11% of Skyworks' 2020 revenue.

Skyworks expects the segment's revenue to rise about 7% to $400 million this year. The unit mainly sells timing, power, broadcast, and access products, which will complement Skyworks' industrial and automotive chips. These products should strengthen Skyworks' bundling capabilities and accelerate its content share gains across the auto and industrial IoT markets.

This will be Skyworks' largest-ever deal. It only had $617 million in cash and equivalents at the end of the first quarter, so it will need to take on more debt to fund the rest of the $2.75 billion takeover with cash.

That arrangement might disappoint investors who admired Skyworks' debt-free balance sheet, but it's a smart way to accelerate its growth while reducing its overwhelming dependence on Apple.

Skyworks' relationship with Apple is a double-edged sword. Beefy upgrade cycles like the iPhone 12 generate strong tailwinds, but Apple's cyclical slowdowns also throttle its growth. Apple also still holds all the cards in negotiating prices, and there's always the possibility that Apple abruptly switches suppliers or develops its own first-party chips.

The Silicon Labs deal won't free Skyworks from Apple, but it's a step in the right direction and indicates the chipmaker is serious about expanding its portfolio far beyond smartphones and tablets.