Please ensure Javascript is enabled for purposes of website accessibility
Log In Help Join The Motley Fool
Free Article Join Over 1 Million Premium Members And Get More In-Depth Stock Guidance and Research
By Harsh Chauhan - Apr 30, 2021 at 8:05AM

The tech company's PCs are in great demand in India.

Indian customers have been warming up to Apple's (AAPL 1.89%) iPhones over the past year thanks to an improved pricing strategy and the company's efforts toward speeding up the availability of its devices produced in-country for sale in that country.

Apple's smartphone market share in India doubled in 2020 on the back of such moves. However, this isn't the only area where Apple is making progress in the world's second-most populous country. Apple's personal computers (PCs) are also flying off the shelves in India, and the company has stepped up its game to take a bigger chunk out of this fast-growing market. 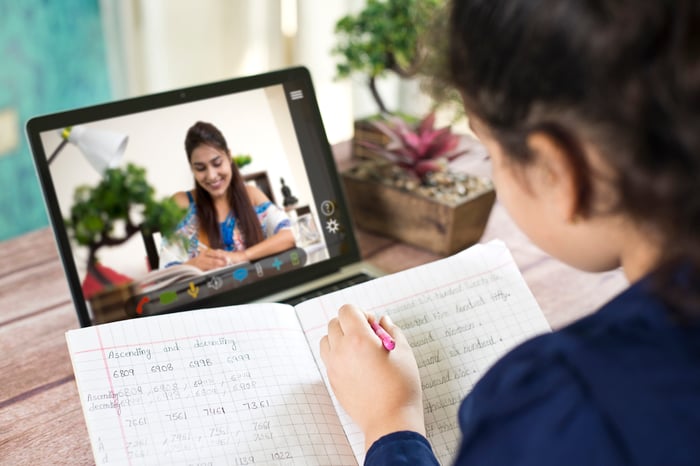 According to data from IDC, MacBook sales in India jumped 24.4% in 2020. This is impressive, as overall PC sales in India slumped 6.4% last year. Notebooks, however, were the bright spot with shipments hitting 7.9 million units during the year, jumping 34% over the previous year (after adjusting for a government-sponsored deal in 2019 that inflated sales that year).

IDC's research also reveals that notebook sales spiked sharply in India in the final quarter of 2020, jumping 62% year over year and accounting for more than 75% of total PC shipments. Apple has been a big beneficiary of this trend of fast-growing notebook sales in India. Indian newspaper Business Standard reports that Apple sold MacBooks and iMacs worth 4,000 crore (approximately $533 million at the current exchange rate) in India last year. The company's share of India's PC market increased to 3% in 2020.

IDC credits the growing demand for high-end notebooks for the surge in Apple's sales, driven by an increase in the number of people working or learning from home. The good news for Apple is that the robust demand environment seems to have spilled over into 2021. The availability of MacBooks powered by the M1 chip reportedly remains restricted on account of high demand and tight supply.

I wouldn't be surprised to see this sales momentum continue for the remainder of the year and beyond, thanks to both near-term and long-term catalysts.

Gearing up for sustained growth

Notebook demand in India could soar once again in 2021. An executive at HP India predicts that notebook sales in the country could jump in the double digits this year, while IDC also has a similar view. These forecasts don't seem surprising given that major parts of India are already under some form of lockdown due to a rapid rise in the number of coronavirus cases.

The second wave of the pandemic has sent the country's healthcare infrastructure reeling as daily new cases are increasing at an alarming pace. As a result, major employers in the country are sticking to a work-from-home model to keep their operations running during such difficult times.

More importantly, the remote work model is expected to stay in India. This is evident from an estimated 57% increase in sales of work-from-home-related furniture in the country being projected over the next five years. Similarly, Technavio expects the online education market in India to clock a compound annual growth rate of 20% through 2025.

These catalysts can lead to sustained growth in laptop and notebook sales in India, and Apple is setting itself up to take advantage of this opportunity by giving that market a higher priority. The company's new product range, including the iMac, will be available for sale in India from April 30, just like in other markets such as the U.S., the U.K., Japan, and China. India used to be a low-priority market for Apple, with the company's products hitting the country's shores much later than their international launch.

Additionally, Apple is resorting to a smart pricing strategy for its PC lineup in India. The entry-level iMac has been priced at 119,900 Indian rupees (around $1,600). That's impressive considering that the same price would have fetched Indian consumers a 21.5-inch iMac a couple of years ago.

So, don't be surprised to see Apple sustain its impressive momentum in India's PC market. Investors would do well to take note of the same as the market is expected to pull in $7 billion in revenue this year (desktops and notebooks combined) and looks set to become bigger in the future. Apple is already generating nice sales over there, as last year's estimates tell us. Its new and improved products could help Apple push the bar higher, giving this tech stock a nice shot in the arm over the long run.