Please ensure Javascript is enabled for purposes of website accessibility
Log In Help Join The Motley Fool
Free Article Join Over 1 Million Premium Members And Get More In-Depth Stock Guidance and Research
By Adria Cimino - May 1, 2021 at 6:15AM

One business unit in particular is seeing more and more demand, and the trend appears likely to continue.

When you think of Amazon (AMZN 1.42%), you probably think first of its retail business. The company's e-commerce operation, with its vast array of general merchandise or groceries likely springs to mind. But the tech giant's major profit driver is actually Amazon Web Services (AWS) -- its cloud computing business.

AWS is the global leader in the space. But that doesn't mean its growth is over. In fact, Amazon CFO Brian Olsavsky made a comment in the latest earnings call that bodes well for Amazon Web Services' revenues in the months and years to come. 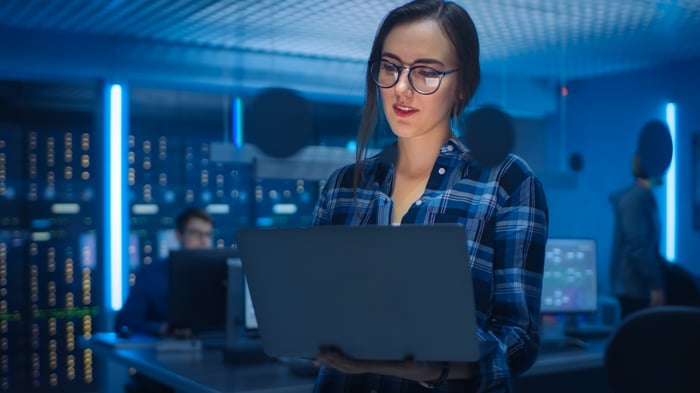 A trend toward tech infrastructure outsourcing

"During COVID, we've seen many enterprises decide that they no longer want to manage their own technology infrastructure. We expect this trend to continue." -- Olsavsky

If Olsavsky's prediction is correct, it could mean billions of dollars in new sales for AWS. So far, the numbers support his thesis. AWS generated sales growth of 32% to $13.5 billion in the first quarter. That was an acceleration from 28% growth in the prior quarter. And it was the first time AWS's quarterly revenues have surpassed 30% year-over-year growth.

That growth picked up across industries in the quarter. AWS is working with Disney on the expansion of the Disney+ streaming service. And Amazon signed several significant sports accounts. AWS is helping the National Hockey League with artificial intelligence to create statistics and analytics. Formula 1 racing uses AWS machine-learning technology to give fans insights into driver strategy. And the PGA Tour joined forces with AWS for the creation and distribution of golf content.

AWS now offers its services in 80 zones throughout 25 geographic regions globally. And an expansion into 15 more zones and five more regions in Australia, India, Indonesia, Spain, and Switzerland is in the works.

The increase in AWS sales is great. But what's even better is how that translates into profit for Amazon. Total operating income more than doubled in the quarter year over year to $8.9 billion. AWS operating income -- at more than $4 billion -- made up 47% of that. This level of earnings contribution isn't new -- the cloud business has been a profit driver for the company for quite some time. For example, AWS produced 63% and 59% of Amazon's 2019 and 2020 annual operating income, respectively.

In short, strength from AWS equals strong profits for Amazon.

And these first-quarter numbers are a good sign for the rest of the year. The AWS run rate illustrates this. This metric predicts 12-month performance using data from shorter time periods. In the first quarter of 2019, the annualized run rate for AWS was $31 billion. During the first quarter of 2020, that number rose to $41 billion. And based on this year's first-quarter sales, the run rate has increased to $54 billion.

AWS ended up reporting annual sales of more than $35 billion in 2019 and sales of more than $45 billion last year. It's reasonable to be optimistic about the cloud business's ability to beat growth targets this year too. And it's encouraging to see the progress in its run rate over the years.

Amazon shares are trading close to a record high, but I still consider them a buy. AWS is a powerful profit driver for the company -- and its growth is picking up rather than stagnating or slowing down. So, the CFO's comment gives me more confidence than ever in Amazon's prospects.