Please ensure Javascript is enabled for purposes of website accessibility
Log In Help Join The Motley Fool
Free Article Join Over 1 Million Premium Members And Get More In-Depth Stock Guidance and Research
By Adam Levine-Weinberg - May 2, 2021 at 9:06AM

This regional airline nearly broke even in 2020 and posted a solid GAAP profit last quarter.

It may not be a household name, but SkyWest (SKYW 0.57%) is one of the biggest airlines in the U.S. Prior to the pandemic, it operated over 2,000 daily departures -- just not under its own name. Instead, it mainly operates regional jet flights under fixed-fee contracts for American Airlines, Delta Air Lines, United Airlines, and Alaska Air.

SkyWest has also become one of the most profitable airlines in the world in recent years. The regional airline continued its winning ways last quarter, logging a profit under generally accepted accounting principles (GAAP), despite the ongoing COVID-19 pandemic.

Whereas its better-known peers posted massive losses throughout 2020, SkyWest reported two quarterly profits last year. It only lost money during the second quarter (when air travel demand bottomed out) and in the fourth quarter (after the federal government's initial payroll support program lapsed). For the full year, it posted a negligible pre-tax loss of $7 million.

Last quarter, SkyWest again benefited from government largesse, thanks to a second payroll support program that was signed into law at the very end of 2020. The carrier posted GAAP net income of $36 million ($0.71 per share), including a $193 million pre-tax benefit from payroll support grants. (To be fair, SkyWest passed much of its payroll savings through to its major airline partners.) 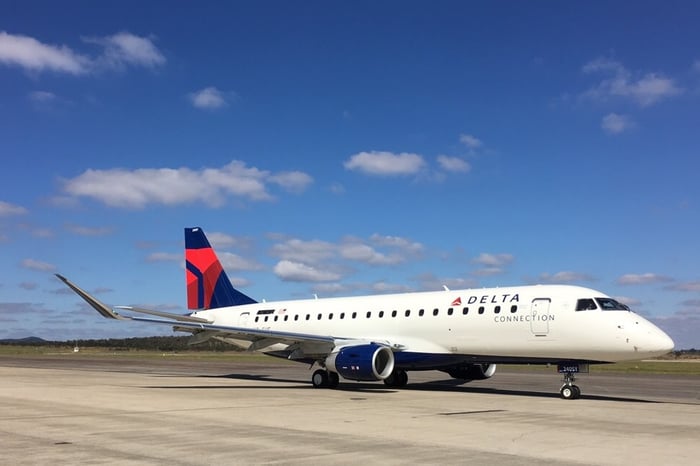 Looking ahead, SkyWest will again benefit from substantial payroll support grants. The company is on track to receive approximately $285 million in additional funding this quarter, of which roughly $230 million will come in the form of grants. Those grants will offset part of SkyWest's labor costs during the second and third quarters.

U.S. leisure travel demand has bounced back in a big way since late February. That's giving airlines the confidence to ramp up flying for the traditional summer travel season. It's great news for SkyWest, which typically gets between 80% and 90% of its revenue from fixed-fee agreements under which it gets paid on a per-flight basis regardless of how much revenue the flight generates.

Indeed, while SkyWest reduced its block hours (the number of hours its planes were in scheduled service) by 23% year over year in the first quarter, it expects a 10% sequential increase this quarter. Furthermore, management estimates that block hours will be down just 5% from 2019 levels in Q3 and make a full recovery by Q4.

Moreover, as flying activity recovers, the mix of flying is shifting toward the Embraer E175: the preferred regional jet of most major airlines. The E175 commands higher revenue per block hour compared to other regional jets at very strong margins. As a result, fixed-fee revenue should recover even faster than block hours.

A fat pitch for long-term investors

In a market where most stocks are extremely pricey, SkyWest stock looks very attractive -- especially now that it has fallen below $50 after touching a 52-week high around $61 in mid-March. 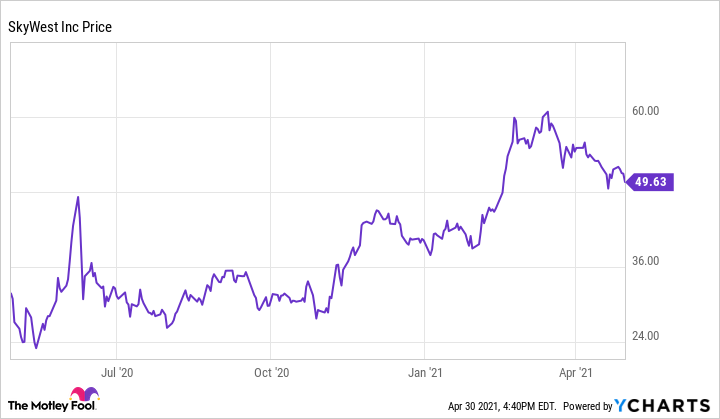 SkyWest is on track to grow its high-margin E175 fleet to 213 aircraft by mid-2022, up from 156 at the end of 2019. It has also started reactivating 25 CRJ-700s under an expanded flying contract with American Airlines. These planes have been sitting in long-term storage, so putting them to productive use should unlock a meaningful amount of incremental profit.

As a result, SkyWest is well positioned to surpass its 2019 adjusted earnings per share (EPS) of $6.25 by 2023. Meanwhile, the company has actually reduced its net debt by about $200 million since the end of 2019, making SkyWest stock a less risky investment.

With net debt declining and a return to strong profitability just a year or two away, SkyWest stock looks like a steal at its current valuation of just eight times its 2019 EPS.