Please ensure Javascript is enabled for purposes of website accessibility
Log In Help Join The Motley Fool
Free Article Join Over 1 Million Premium Members And Get More In-Depth Stock Guidance and Research
By Rich Smith - May 2, 2021 at 7:53AM

SpaceX could make it happen -- and these companies could help.

Space advocate Robert Jacobson, a former principal with the Space Angels Network and founding member of the Space Advisors consulting firm, has spent the past decade advising investors and entrepreneurs on the potential of "space" as a field of business.

Last week, I was able to sit down with Jacobson by phone to discuss his new book -- Space Is Open for Business -- and why he thinks the next 30 years could be a renaissance for space companies and a big opportunity for investors who want to get in on the ground floor of the space business. 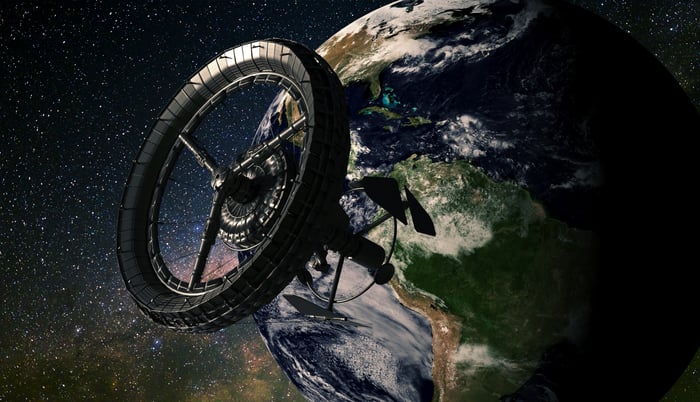 Things are moving faster than you think

It's been only a little more than a decade since the first SpaceX Falcon 9 rocket blasted off from Cape Canaveral (and Jacobson was there to witness it!) and a little less than a decade since SpaceX ran its first resupply mission to the International Space Station. In that time SpaceX -- one of the first promising space start-ups spotted by Jacobson and his crew -- has grown into a bona fide space company and a worthy rival to incumbent U.S. space contractor United Launch Alliance.

As fast as this change has happened already, you may be shocked to learn how much more things may change if the space industry has just a little more time to develop. In all of recorded history, for example, fewer than 600 humans have ever left Earth's atmosphere, says Jacobson. But by 2050, it's possible we could begin to see first "hundreds," then "thousands," and eventually "hundreds of thousands" of people not just visiting space, but living and working there.

What it will take

Princeton professor and space activist Dr. Gerard K. O'Neill laid out the roadmap for making this happen in his seminal work The High Frontier, explains Jacobson, describing how a series of large space stations equipped with machinery to create artificial gravity could be placed at "Lagrange points" between Earth and the moon. Because humans evolved to live in gravity, and because astronauts' physical deterioration living aboard the International Space Station is well documented, it's believed that large space stations providing artificial gravity would be superior to moon colonies for supporting large populations in space.

Cost and capacity (i.e., payload) have historically been the big obstacles to building such stations, of course. But Jacobson believes that the latest generation of heavy lift rockets, and SpaceX's Starship in particular, could be the key to solving both these problems.

Elon Musk has estimated the rocket's operating cost at just $2 million per flight, and "Starship is being designed to carry 100-150 metric tons," notes Jacobson, "and could fly multiple flights per day. If and when Starship becomes operational, scaling space activities becomes more likely to happen."

Consider that the current International Space Station masses just over 400 metric tons and required about 40 rocket launches in total to assemble -- mostly space shuttle launches costing $1 billion and up. So ton for ton, Starship holds the potential to cut the number of flights needed by 90% -- and to enable the construction of even larger space stations, at greatly reduced cost.

As for populating these stations with people, "hundreds of thousands" of inhabitants may sound like a stretch today, when every eye turns to NASA for its once-or-twice-a-year launches of three or four astronauts at a time. But consider that Starship is being designed to carry as many as 100 passengers at a time and to launch multiple times per day. One hundred passengers times three launches per day times 365 days in a year means that -- in theory at least -- "a single Starship dedicated to orbital operations could put more than 100,000 people into space in any given year."

And SpaceX's Musk expects Starship to be ready for human spaceflight as early as 2023.

Of course, SpaceX and Starship can't do this job all on their own -- and they aren't the only companies worth following in space. Over the course of our discussion, Jacobson highlighted two other companies for investors to keep their eyes on.

Spire Global is one. The satellite company crunches data from its private constellation of 100 Earth observation satellites to provide insights to customers in the maritime and aviation industries and in weather forecasting, to monitor sea traffic, optimize air traffic routes, and monitor trends in global warming. Spire plans to go public in a SPAC IPO sponsored by NavSight Holdings (NSH) this summer.

Redwire Space is another. The self-described "preeminent developer of space infrastructure" specializes in technologies that will be essential to building the space stations of the 21st century, including "on-orbit servicing, assembly and manufacturing (OSAM) capabilities" and additive manufacturing (3D printing) of parts for "robotic assembly" in space. This company, too, is due to go public soon, after SPAC company Genesis Park (GNPK) acquires it in Q2 2021.

In the meantime, in between time, Jacobson urges investors to keep an eye on "small space" and in particular on launchers of smaller rockets such as Rocket Lab and Virgin Orbit. While they're perhaps not as sexy as Starship and its multiton payloads, Jacobson believes there's still room in space for small rocket launchers performing such functions as sending small satellites into specific orbits, replacing defunct satellites as they fall out of larger constellations, and performing "on-demand" launch missions for customers such as the U.S. military.

Space, in short, is much bigger than SpaceX stock alone -- and it's finally open for business.