Please ensure Javascript is enabled for purposes of website accessibility
Log In Help Join The Motley Fool
Free Article Join Over 1 Million Premium Members And Get More In-Depth Stock Guidance and Research
By John Rosevear - May 3, 2021 at 12:51PM

Ford and BMW will own equal shares of the Colorado-based solid-state battery start-up.

Ford Motor Company (F 1.71%) said that it's increasing its ownership stake in Solid Power, a Colorado-based maker of solid-state batteries for electric vehicles (EVs) that has positioned itself as a key rival to QuantumScape (QS 0.93%).

Ford, which first invested in Solid Power in 2019, said that it will invest an unspecified sum in the battery maker's current $130 million Series B funding round. Once the round is complete, Ford and rival automaker BMW (BMWYY 0.35%) (BAMXF -1.29%), which is also investing in the Series B round, will own equal stakes in Solid Power.

Solid-state batteries, which omit the liquid electrolyte used in today's lithium-ion batteries, have the potential to offer greater energy density than lithium-ion batteries with less weight and at a lower cost.  A solid-state battery design that can be mass-produced at a reasonable cost has eluded researchers for years, but Solid Power, which began its work in 2012, is one of several start-ups believed to be closing in on a viable design for EVs. 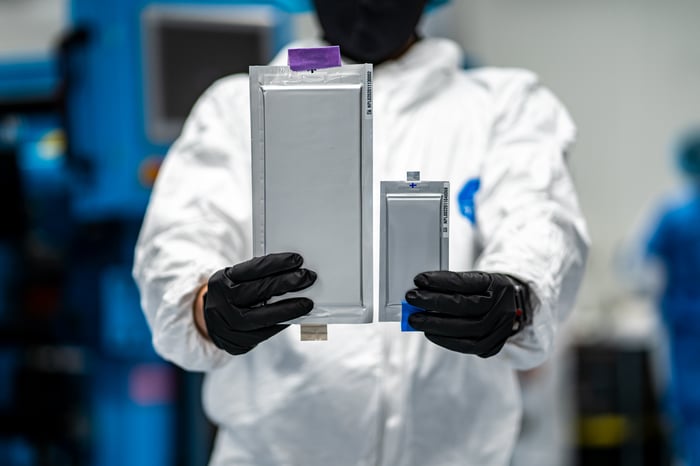 A key competitive differentiator: Solid Power's solid-state battery cells can be manufactured with equipment and processes adapted from lithium-ion battery production, meaning that existing battery plants can be adapted to produce its batteries at relatively low cost.

While other solid-state battery efforts, including QuantumScape's, are thought to be several years away from manufacturing, Solid Power is already producing its second-generation 20 ampere-hour (Ah) battery cells on a pilot production line.

As part of its agreement to invest in the start-up, Ford will receive full-scale prototype third-generation 100 Ah battery cells from Solid Power for testing in its EVs, starting next year.