Please ensure Javascript is enabled for purposes of website accessibility
Log In Help Join The Motley Fool
Free Article Join Over 1 Million Premium Members And Get More In-Depth Stock Guidance and Research
By David Jagielski - May 4, 2021 at 6:03AM

These businesses could be in trouble once the pandemic is over.

Investing based on short-term trends can be dangerous. Throw some high valuations into the mix, and you could have a recipe for disaster. That's what I see when looking at two stocks: Ocugen (OCGN 1.41%) and Peloton (PTON 0.00%).

Not only are these both extremely expensive investments, but I'm also concerned about what their futures will look like in a post-pandemic world when life goes back to normal. Although both stocks have outperformed the markets over the past year, these are not investments that I would consider buying today. 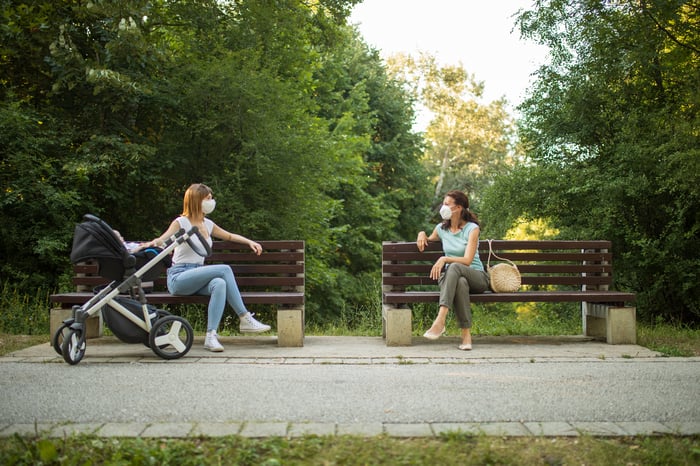 Ocugen came out of nowhere this year, and it was only news that it was partnering with Indian company Bharat Biotech on a COVID-19 vaccine that gained Ocugen investor attention. Investors are even more excited after the companies announced in April that their vaccine (COVAXIN) was 100% effective against severe COVID-19 cases. Shares of Ocugen are now up nearly 750% since the start of the year (the S&P 500 has risen by just 11%).

But here's the problem: The U.S. may already have all the vaccines it needs. And according to the deal the two companies announced in February, Ocugen will get 45% of the profits the vaccine generates in the U.S. market. As of April 29, 30% of people in the U.S. are now fully vaccinated, and 43% have received at least one dose of a vaccine.

Even if Ocugen gets the green light from the U.S. Food and Drug Administration (FDA), there may not be a whole lot of demand left for the jab. The U.S. recently said it would share its stockpile of AstraZeneca's vaccine that it currently has (which the FDA hasn't approved for emergency use) with the rest of the world. Given the U.S.' high vaccination rate and growing COVID-19 case numbers around the world, it wouldn't be a surprise if regulators were to take a similar approach with a vaccine from Ocugen.

With nothing else far along in Ocugen's pipeline (its gene-therapy product OCU400 is next-most advanced and is only entering phase 1/2a trials this year), the outlook for the company looks even bleaker once you look past the vaccine. With minimal sales, no profitability, and a questionable future ahead, Ocugen's $2.4 billion valuation looks incredibly overpriced -- and the healthcare stock could give back some of its sky-high gains later this year.

Peloton is another company whose post-pandemic future I am not excited about. Paying thousands of dollars for its bikes and treadmills -- and also paying a subscription on top of that to access its classes -- is not a business model I'm confident will generate sustainable growth over the long haul. Amid the pandemic, when people are stuck at home with not much to do, it is much easier to see a market for that. So it's little surprise that for the six-month period ending Dec. 31, 2020, Peloton's sales of $1.8 billion more than doubled the $694 million it generated during the same period a year ago.

But profits have been thin, with Peloton generating a net margin of just 5.6% over the past 12 months. And the company's obscene price-to-earnings multiple of 145 makes tech giant Amazon look dirt cheap while trading at just 64 times its profits.

That's a steep price to pay for Peloton, because once restrictions are lifted across the country and people are able to resume their day-to-day lives, the demand for stationary bikes may not be as strong. Gym memberships cost a fraction of the price of the company's bikes (not to mention provide people with some much-needed social interaction). So, while Peloton may be doing well right now, I would be hesitant to invest as over the longer term, as the company's impressive growth rate will likely slow down.

And to make matters worse, Peloton is also coming under pressure to issue a recall on its treadmills after a child died in an accident involving one. The company is trying to fight the recall, but it's unclear how the issue will play out. The Consumer Product Safety Commission is looking into the matter and issued an administrative subpoena to get information on the child and the family.

A recall would only further hamper its bottom line, which isn't great to begin with. There are too many concerns surrounding Peloton right now to make this an investable stock. Even though it is down more than 35% in 2021, this could just be the beginning of a much larger dive.