Please ensure Javascript is enabled for purposes of website accessibility
Log In Help Join The Motley Fool
Free Article Join Over 1 Million Premium Members And Get More In-Depth Stock Guidance and Research
By Zhiyuan Sun - May 4, 2021 at 6:08AM

Here's how an electric vehicle maker and a popular cannabis company can enrich your portfolio.

Investors frequently miss out on the best of opportunities because they think a stock is overvalued. The truth is, as long as a company has high rates of growth that it can sustain over a lengthy period, its potential is nearly limitless. 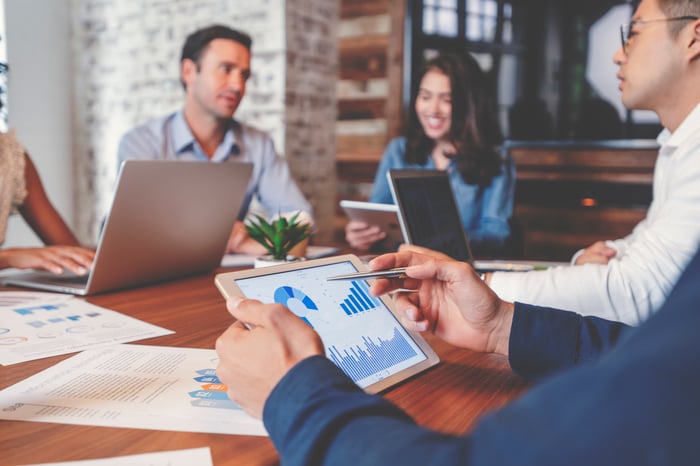 When it comes to owning an electric vehicles (EV), affordability and convenience are two top requirements that come to mind. According to surveys, consumers want to buy an electric car that costs less than $36,000, has a minimum range of 291 miles, and a maximum of 31 minute recharge time. At the moment, Tesla's Model 3 is the only EV that could almost accomplish the three demands, beating both the Nissan Leaf and the Chevrolet Volt.

On top of that, the Model 3 offers full-self driving and it saves owners more than 50% in fuel costs per year versus cars that run on gas. Governments also hand out substantial incentive to individuals to buy EVs, with total credits amounting to over $10,000 applied to the purchase price depending on the jurisdiction.

The company has invested in mega-factories that could produce 1.05 million cars per year. At its current growth rate (about 739,000 cars annualized, up 109% from Q1 2020), it would max out on its manufacturing capacity by 2022. Luckily, Tesla has two more facilities in construction and four projects in development.

Overall, Tesla is well capitalized to sustain its momentum. Its valuation of 23 times revenue seems high, but is justified considering it's close to doubling its sales year over year. I think this is a fast-growing auto stock to buy and hold for the long term. 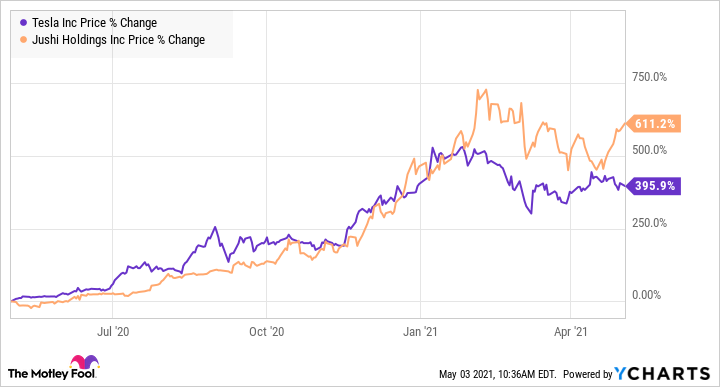 Founded in 2018 as a financing venture, Jushi Holdings has grown to dominate the Pennsylvania pot market in a little over two years. It currently holds approximately 18% of the market share by sales volume in the state -- and that piece of the pie is growing.

Last year, the company did $80.8 million in sales, which increased by an astonishing 690% year over year. The increase was largely due to soaring demand in the Pennsylvania market as a whole, which doubled over the past year to about $450 million.

During Q4 2020, the company acquired three dispensaries and opened up three new shops. It currently has 17 stores under its banner, with an additional 10 to 12 openings anticipated by the end of the year. Its brand of flowers, concentrates, and CBD is attracting 615 new customers each day to its shops. Jushi also has a robust e-commerce segment with revenues growing at 179% year over year.

In Q1 2021, Jushi's momentum continued, bringing in $41.6 million in revenue. It is also on track to open up a new dispensary in Pennsylvania every month for the rest of the year. There is currently 58% support for legalizing recreational cannabis in the state, a record high.

For the entire year, Jushi expects to bring in up to $255 million in sales and $50 million in operating income less non-cash items (EBITDA). Investors are getting a fair deal for its stock, paying 12 times revenue for an estimated 219% growth rate. Jushi stock is a great way to position yourself before the possible legalization of recreational weed in Pennsylvania.

Cannabis Declared an "Essential Business." Tesla, Not So Much.