Please ensure Javascript is enabled for purposes of website accessibility
Log In Help Join The Motley Fool
Free Article Join Over 1 Million Premium Members And Get More In-Depth Stock Guidance and Research
By David Jagielski - Apr 8, 2021 at 6:23AM

It can be a great way to invest in the Pennsylvania pot market.

Jushi Holdings (JUSHF 2.36%) has been one of the hottest pot stocks on the markets over the past year, soaring nearly 700% in value and eclipsing the Horizons Marijuana Life Sciences ETF, which is up 120% during that time. Although the multistate operator is growing in size, so too is its valuation. And there are also concerns about its hefty debt load.

However, there are many more factors to consider. Below, I'll look at how the business is doing, its future, and its valuation to help assess whether you should invest in Jushi or if you are better off buying shares of another cannabis company instead. 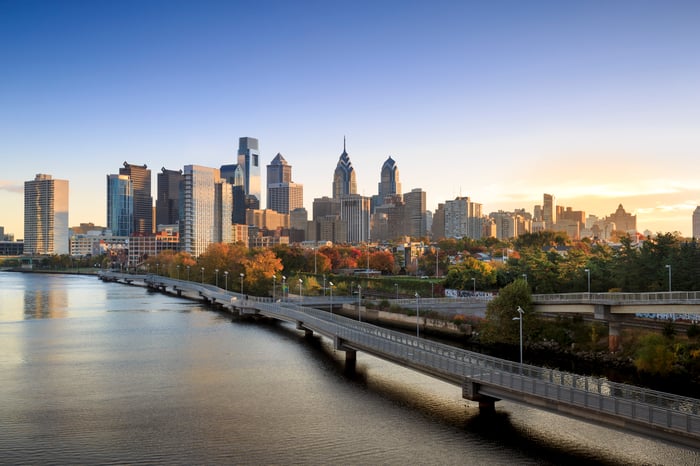 What do Jushi's numbers say?

The company reported its third-quarter results on Nov. 24. Sales for the period ending Sept. 30 totaled $24.9 million, 66.8% higher than the $14.9 million that Jushi reported in the previous quarter. The company achieved great organic growth, with same-store sales rising by 45% (this excluded temporarily closed stores).

The high growth rate is impressive, and the company also posted an adjusted EBITDA profit of $1.9 million. This marked the first time the company finished a quarter in the black. In January, management said it expects revenue for the fourth quarter to come in between $32 million and $33 million, which would be a quarter-over-quarter increase of about 31%.

But another important consideration for investors is cash flow. If there is too much cash burn, dilution may be inevitable, and that can offset a growth stock's gains. Over the past three quarters, Jushi used up $12.5 million to fund its day-to-day operations. It also spent another $32.5 million on investing activities, including acquisitions. After the closing of its most recent offering in February, the company reported pro forma cash and short-term investments totaling $180 million.

However, investors will want to take a good look at Jushi's balance sheet when it releases its year-end numbers on April 29. That's because on its Q3 report it had $190.4 million in long-term liabilities, which totaled 63% of its total assets. And if you strip down goodwill and other intangible assets (which can sometimes be difficult to estimate), that percentage rises to 141%. That suggests there will be a growing need to raise more cash for Jushi, especially if it continues burning money. And for shareholders, that could mean dilution.

How promising are the growth opportunities?

The Pennsylvania market will be key to Jushi's long-term growth. On April 1, the company announced that it had begun the first phase of an expansion that will add 40,000 square feet to its cultivation facility in Scranton, Penn. -- it currently has 89,000 square feet of space. Jushi expects the expansion to finish by the end of this year.

A second phase is in the design stage and would add another 60,000 square feet. Construction on that could begin in the third quarter of 2021. Last month, the company opened its 17th retail location in the country, 11 of which are now in Pennsylvania.

However, Jushi is also eyeing other markets. Earlier this month it closed on the acquisition of FBS Nevada, which has facilities in North Las Vegas. And in January, it announced plans to open three new locations in California. Jushi previously opened a store in Santa Barbara in October.

Jushi is targeting some great opportunities out of its main market, but for the stock to be a great buy, the business will need to do well in Pennsylvania. And while the state isn't on the cusp of recreational legalization just yet, its governor is in favor. But even without the recreational market, medical marijuana sales there were more than $800 million last year -- not far from Illinois and Michigan, both states where adult use is legal, which generated around $1 billion each in pot-related revenue.

Should you buy Jushi stock?

Jushi looks like it will finish 2020 with approximately $81 million in sales. At a market cap of around $800 million, that puts the stock at a price-to-sales multiple of just under 10. That is in line with how investors are valuing other multistate operators in the country: 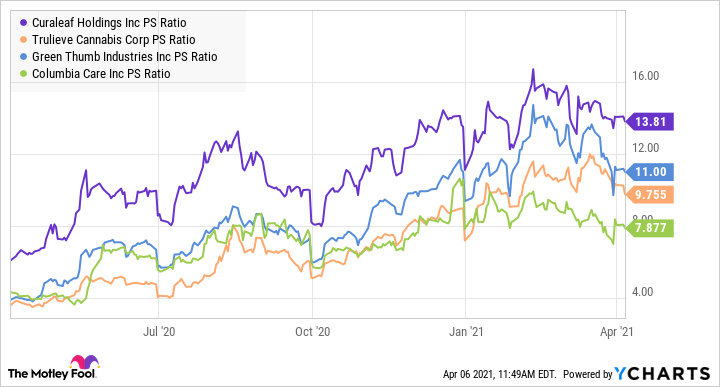 Jushi doesn't look like a bad buy, and it creates a great opportunity for investors who are bullish on the Pennsylvania market.

However, with both New Jersey and New York legalizing pot, consumers in Pennsylvania soon won't have far to go if they want to buy recreational pot. And that could lead to a decline in revenue for the state -- at least until it follows suit and legalizes pot.

For the risk, especially with its high debt load and cash burn, Jushi's stock should be at a discount -- and instead it is trading alongside many of the top cannabis stocks in the country. And that is why I would steer clear of it for now. At the very least, I would wait until Jushi's latest earnings numbers come out to see whether the company's financial situation has improved.