Please ensure Javascript is enabled for purposes of website accessibility
Log In Help Join The Motley Fool
Free Article Join Over 1 Million Premium Members And Get More In-Depth Stock Guidance and Research
By Will Healy - May 4, 2021 at 7:14AM

Nokia (NOK 0.22%) looks like a screaming buy on the surface. The company beat first-quarter earnings estimates when it reported Thursday, and its stock price rose by 11% the next day.

It could also continue to earn business as companies increase demand for telecom equipment and national governments block companies within their borders from using Huawei's competing hardware. However, investors also should consider three factors that could undercut Nokia's potentially lucrative 5G opportunity.

1. Its competitive advantage is tenuous

Nokia benefits by providing the equipment that makes 5G possible. The network infrastructure division of the company, which manufactures that equipment, produced the largest revenue gains in the first quarter. 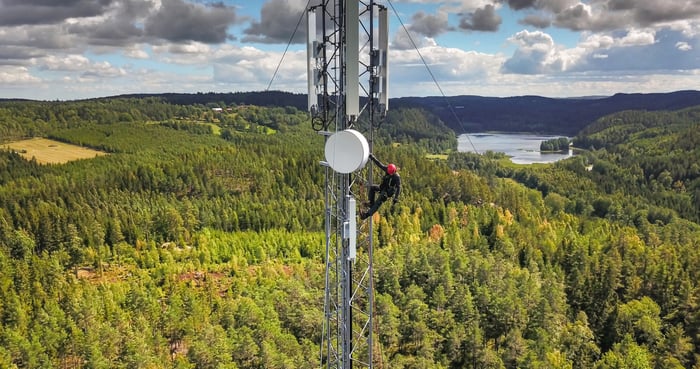 Nonetheless, its equipment faces challenges. Initially, Nokia chose a chipset that provided flexibility and gave it a time-to-market advantage, but it proved expensive. This forced Nokia to switch to a lower-cost chipset called ReefShark.

Even more concerning, researchers from Gartner noted that multiple operators found that Nokia's equipment did not match the performance and response times of some of its competitors' equipment. Ryan Koontz, an equity analyst at Rosenblatt Securities, stated in an interview that Ericsson had built a technical lead of between six and 12 months over Nokia in 5G hardware development.

This may have been what led Verizon (VZ 0.17%) to award Samsung a 5G equipment contract reportedly worth 7.9 trillion Korean won ($7.1 billion) last fall. That was undoubtedly a huge setback for Nokia, as CEO Pekka Lundmark noted on the Q1 2021 earnings call that Verizon remains a "top three customer" and pointed out that Nokia hardware still occupies a prominent place in Verizon's network.

Despite these challenges, Nokia's business showed signs of improvement in the latest quarter. Net sales increased 3% year over year to just under 5.1 billion euros ($6.2 billion).

Unfortunately, a deeper dive into the revenue numbers points to the tenuous nature of this increase. Three of its five divisions reported declining revenues, and these parts of the company accounted for 59% of its total sales.

Still, revenue from the network infrastructure division, which includes its 5G equipment arm, increased by 22% year over year. It was the only division to report double-digit percentage growth. Nokia Technologies, its consumer products division, grew revenue by 5% during that period.

Moreover, much of the improvement came from reducing operating expenses. Research and development costs dropped 1%, while sales, general, and administrative expenses fell by 17%. This allowed Nokia to earn 263 million euros ($318 million), up from a loss of 115 million euros in the year-ago quarter.

Additionally, the company offered mediocre guidance for the year. It believes sales for 2021 will come in between 20.6 billion and 21.8 billion euros. However, Nokia reported net sales of 21.9 billion euros in 2020, so even the top of that outlook range implies a revenue decline.

Nonetheless, Nokia also generated 1.2 billion euros ($1.5 billion) in free cash flow. That easily covered the approximately 50 million euros it paid in net interest during the quarter. Hence, the company can support its interest-bearing liabilities of just under 5.2 billion euros.

Such results reduce the likelihood of Nokia falling off a cliff. However, with the mixed revenue picture, the company could struggle to hold on to its growth.

3. Nokia's stock is not as cheap as it appears

Finally, investors need to understand why Nokia sports such a low share price. Casual observers may see this stock selling for under $5 per share and think they may have found a bargain. After all, it received extensive coverage in Reddit's WallStreetBets subreddit following its earnings report. Many traders probably hope Nokia can experience a surge like the ones that dramatically boosted stocks such as GameStop (GME -2.33%) and AMC Entertainment (AMC -1.64%).

However, one only needs to glance at Nokia's 5.7 billion shares outstanding to understand why that may not happen. This comes in dramatically higher than Gamestop's shares outstanding of about 71 million. Also, only about 450 million AMC shares are outstanding even after a recent massive share issuance. With so many shares available, prospective buyers will more than likely find shares without having to bid the stock price significantly higher.

Moreover, Nokia's stock price of approximately $4.70 per share gives it a market cap of around $27 billion. That makes it a large-cap stock -- quite unusual in the ranks of penny stocks, most of which sport market caps of well under $1 billion. Nokia would have to drop well below $2 per share to fall under the $10 billion market cap minimum to maintain large-cap status. For this reason, investors should not consider this a cheap stock despite the low nominal price.

The state of Nokia stock

Nokia's first-quarter growth, particularly in its network infrastructure segment, appears encouraging. However, redesigns and lost contracts place its competitive advantage in doubt, and revenues from the majority of the company's divisions are shrinking. Given the massive number of shares outstanding, this telecom stock will likely struggle to move higher under current conditions.