Please ensure Javascript is enabled for purposes of website accessibility
Log In Help Join The Motley Fool
Free Article Join Over 1 Million Premium Members And Get More In-Depth Stock Guidance and Research
By Adam Levine-Weinberg - May 11, 2021 at 7:52AM

This little-known airline has a unique strategy and posted a profit last quarter despite the ongoing COVID-19 pandemic.

Barely more than a year ago, the COVID-19 pandemic crushed U.S. airlines. However, the industry is experiencing a renaissance of sorts in 2021, with multiple new airlines starting operations and two established budget airlines finally going public.

Sun Country Airlines (SNCY -0.25%) completed the U.S. airline industry's first IPO of 2021 in March. Shares of the Minnesota-based low-cost carrier surged 51% from its $24 IPO price on the day it went public. Sun Country stock continued gaining ground thereafter and has traded near the $40 mark for the past month. 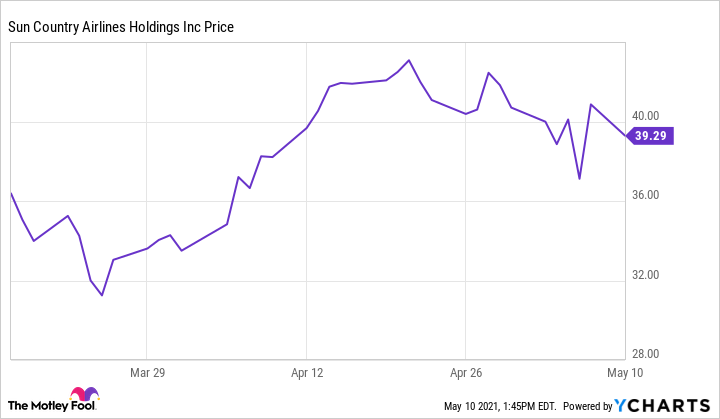 Last week, Sun Country Airlines released its first earnings report as a public company. Let's see what the results mean for investors thinking about investing in this recent IPO stock.

Most U.S. airlines posted massive losses in the first quarter as the COVID-19 pandemic continued to weigh heavily on demand. By contrast, while Sun Country's revenue fell 29% year over year to $128 million last quarter, the company logged a profit of $0.24 per share: up 60% from Q1 2020.

To be fair, Sun Country's first-quarter results included a significant tailwind from payroll support grants. But excluding those grants and other one-time items, the company still recorded a small adjusted operating profit of $1.2 million and limited its adjusted net loss to $4.9 million ($0.09 per share).

Sun Country Airlines is quite small today. It has 31 aircraft in its passenger fleet, plus another 12 cargo planes. At the time of its IPO, the company said that it planned to expand the passenger fleet to around 50 aircraft by the end of 2023. That would represent a 61% increase from its current size.

The pandemic has made growth particularly attractive for Sun Country. The carrier doesn't have any new aircraft on order. Instead, it plans to expand its fleet by buying cheap used Boeing 737s that other carriers are retiring or returning to aircraft leasing companies as they downsize to match demand. Meanwhile, management sees plenty of opportunities to expand point-to-point flying from its existing base in the Twin Cities, smaller markets throughout the Upper Midwest, and other underserved cities around the country.

That said, Sun Country Airlines doesn't expect to expand its cargo business in the near term, and growth in its charter operation may not keep pace with the growth of its fleet. As a result, the airline will have less of a hedge against volatility in its core scheduled passenger airline business going forward.

Additionally, Sun Country may struggle to match the results it produces on routes from its hometown in new markets where it has little name recognition. It will also likely face stiff competition in potential growth markets from new airline start-ups like Avelo Airlines and Breeze Airways, as well as established budget carriers like Allegiant Travel, Frontier Airlines, and Spirit Airlines (SAVE -0.45%). An airline worth watching -- from the sidelines

Sun Country's cargo and charter operations differentiate it from other low-cost airlines and could enable it to deliver less volatile results over the long term. Sun Country also has a pristine balance sheet, which represents an important competitive advantage, particularly now.

Still, Sun Country started hauling cargo just a year ago. Furthermore, as noted above, the charter business could fade in importance as the company grows its scheduled passenger operations. Nevertheless, Sun Country Airlines stock trades at a premium valuation, with a market cap of roughly $2.2 billion.

This seems awfully pricey, considering that Spirit Airlines -- which is on track to produce five times as much revenue as Sun Country in 2022, according to Wall Street analysts -- has a market cap of less than $4 billion. Spirit enjoys economies of scale and broad brand recognition. And while the budget airline giant suffered in 2020, it consistently recorded higher operating margins than Sun Country Airlines before the pandemic hit.

Sun Country Airlines has an interesting strategy and could be very successful in the long run. However, it's hard to justify paying a premium for Sun Country shares when you could invest in the established ultra-low cost leader -- Spirit Airlines -- at a much lower valuation, instead.

Why Strong Revenue Growth Could Give Sun Country Airlines a Lift