Please ensure Javascript is enabled for purposes of website accessibility
Log In Help Join The Motley Fool
Free Article Join Over 1 Million Premium Members And Get More In-Depth Stock Guidance and Research
By Rich Smith - May 11, 2021 at 12:21PM

In the race to own China's EV market, NIO, XPeng, and Li Auto are catching up.

Shares of electric car leader Tesla (TSLA -0.37%) are losing some steam Tuesday, falling as much as 5% in early trading and still down about 2.2% as we approach the noonday mark (EDT).

What's ailing Tesla today? A couple of things, actually -- but both of them are named "China." 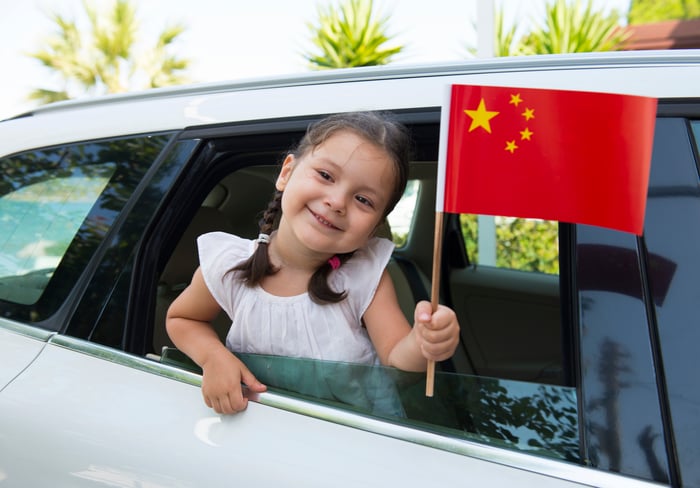 As Barron's reports this morning, Tesla sold fewer than 26,000 electric vehicles in China in April, a 26% sequential slide from the 35,000 units moved in March. Local competition appears to be the problem there, with the news magazine reporting that in aggregate, rival EV companies NIO (NIO -0.85%), XPeng (XPEV -1.39%), and Li Auto (LI -0.23%) grew their Chinese EV sales by about 1,000 units.

That could be a problem for Tesla, which is believed to be counting on China to provide 40% of its sales in 2022. If growth is slowing there, it could impact Tesla's entire growth rate worldwide. And adding credibility to worries that it might be a problem, Reuters reported this morning that Tesla has suspended plans to buy additional land adjacent to its Shanghai manufacturing plant. Granted, the existing plant is designed to produce far more cars than Tesla is already selling in China -- about 500,000 units annually. But the suspension does call into question hopes that Teslas might be selling so well in China that the company would need to expand operations to keep up with demand.

That no longer seems to be the case.

So is this a death knell for Tesla stock? I wouldn't go quite that far just yet, and it's even possible that investors are overreacting to today's news out of China. To understand why, just do a bit of math with me: Tesla sold nearly 26,000 Teslas in China in April, right? Multiply that by 12 months, and you only get to 312,000 units or so -- meaning that a plant designed to build 500,000 units is still plenty big to meet existing demand, and even growing demand, for Teslas in China.

What's more, defying media reports, Tesla insists that its operations in China are actually still "developing as planned," while experts suggest that even without buying more land, Tesla's existing plant could be expanded to produce more than 500,000 cars a year should the company so desire.

Long story short, this latest sales report out of China looks more like a yellow flag than a red flag to me.