Please ensure Javascript is enabled for purposes of website accessibility
Log In Help Join The Motley Fool
Free Article Join Over 1 Million Premium Members And Get More In-Depth Stock Guidance and Research
By David Jagielski - May 11, 2021 at 7:47AM

Many of Phillip Morris' rivals have already been making big investments in the sector.

Tobacco companies have the potential to be great partners to the cannabis industry. Both sectors have faced regulatory challenges and many hurdles with promoting their products in ways other industries simply can't relate to. And numerous tobacco companies have already made investments in the cannabis industry over the past few years, including Altria, Imperial Brands, and most recently British American Tobacco.

But one notable tobacco company that investors are still looking for a big move from is Philip Morris International (PM 0.41%). That could soon change: In a recent interview with Bloomberg, the company hinted that it may not be too long before it dives into the cannabis sector. 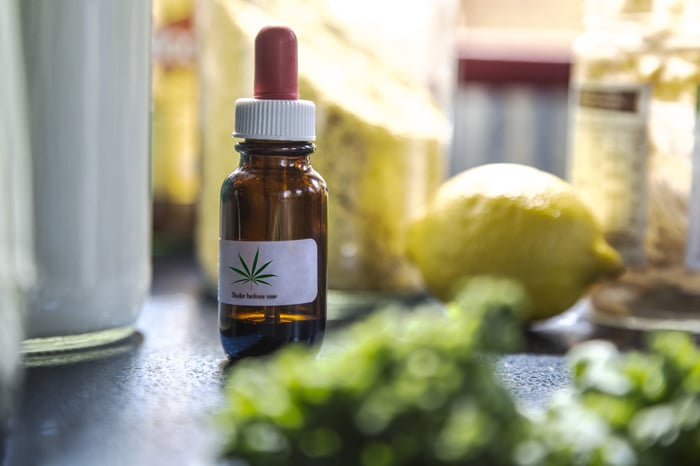 CEO Andre Calantzopoulos told Bloomberg that his company is looking at cannabis, but notes that "the market is so young and there isn't robust regulation yet," which is why it requires a lot of analysis. However, there is one area of interest for the company: "[O]ur priority is what we're doing with our smoke-free products, and that's where I would stay on cannabis."

There are many kinds of products that could fit this category for Philip Morris. From beverages to edibles to wellness products, there are plenty of opportunities for Philip Morris to jump into the sector and diversify its offerings. The market for cannabidiol-infused products is particularly attractive, as analysts from Meticulous Research project that segment alone could be worth $165.7 billion in 2027, rising at a compounded annual growth rate of 48.1%. That includes a broad range of products, including personal care, supplements, and beverages.

That high growth rate would certainly be attractive for a company that saw sales decline by 3.7% in 2020, and which generated less than 1% sales growth in the previous year.

Which cannabis companies could be a good fit for Philip Morris?

With marijuana federally prohibited in the U.S., if Philip Morris wants to get into the pot business, it will likely look north of the border. One option could be Valens (VLNCF -4.15%), a cannabis extractor that helps companies develop a variety of cannabis products, including oils, capsules, beverages, and vape cartridges. Having access to those capabilities would instantly advance Philip Morris's opportunities in the space. And given that Valens's market cap is less than $500 million, the tobacco giant would easily be able to afford the purchase -- Philip Morris reported cash and cash equivalents of $3.9 billion as of March 31. An even cheaper option is Neptune Wellness Solutions, which has a market cap of just over $200 million.

But if Philip Morris wants more diverse options, HEXO (HEXO 1.37%) could be intriguing. In 2018 the company created a joint venture, Truss, with Molson Coors to develop cannabis-infused beverages.

In its most recent earnings report, released on March 18 and for the period ending Jan. 31, HEXO's beverage sales totaled 3.4 million Canadian dollars, which represented more than 10% of its net revenue. Beverages are an emerging part of the company's business, helping HEXO's top line increase by 94% from the prior-year period. The company also generates revenue from the sale of medical marijuana products (in both domestic and international markets), as well as adult-use pot sales that go beyond just beverages. Its market cap of about $900 million U.S. makes it the priciest option on this list (assuming Philip Morris wants to buy the company outright), but it would certainly be a quick way to make a big splash in the cannabis sector.

Is an investment inevitable?

Given the other big names in the tobacco industry that have already moved into the cannabis sector, it would be a shock if Philip Morris didn't follow suit at some point. There isn't a whole lot for the company to lose by doing so. The Canadian market is a safe way the company can expand into marijuana without running into legal issues, and it allows the business to start developing and growing products for when the U.S. pot market is open for business. Valuations also aren't terribly high -- it won't need to worry about writing down an investment of billions of dollars the way Altria did with Juul.

The benefits from tapping into a hot new market certainly outweigh the risks, and the danger is that if Philip Morris doesn't make a move soon, investors may simply ditch the stock and invest in tobacco companies that already have some exposure to cannabis. That's why I would expect something to happen sooner rather than later on that front.

But regardless of whether Philip Morris invests in cannabis, it's still anyone's guess as to which company it may partner with if it does. And that is what ultimately matters to ensure that the company is creating value for its shareholders by finding a good fit. Until there is something more definitive, however, both cannabis and tobacco investors should take a wait-and-see approach on this stock.