Please ensure Javascript is enabled for purposes of website accessibility
Log In Help Join The Motley Fool
Free Article Join Over 1 Million Premium Members And Get More In-Depth Stock Guidance and Research
By Adria Cimino - May 12, 2021 at 6:30AM

Let's look to the long term for our answer.

Pfizer (PFE 3.77%) just scored another first. The U.S. Food and Drug Administration (FDA) granted it authorization for the use of its coronavirus vaccine in a new age group -- 12 through 15. In December, Pfizer became the first company to win Emergency Use Authorization (EUA) for a coronavirus vaccine. That covered individuals ages 16 and older.

A Centers for Disease Control and Prevention (CDC) panel meets today to discuss the expansion of use. Once the CDC issues its recommendation, healthcare facilities may start vaccinating younger teens. Of course, this is great news for Pfizer. But what does this mean for fellow market leader Moderna (MRNA -0.37%)? The biotech company also is aiming to vaccinate teens. Let's see where things stand. 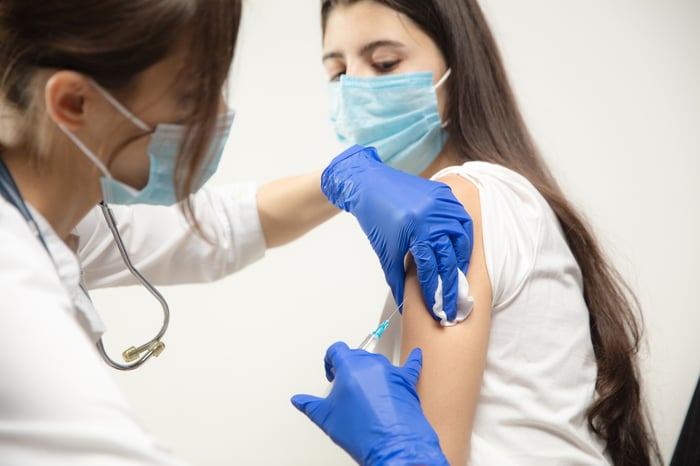 In talks with the FDA

Moderna recently reported positive initial data from its trial of 3,235 volunteers ages 12 through 17. It showed 96% efficacy in participants who received at least one dose. The company continues to collect data and says it's in discussions with the FDA regarding an expansion of its EUA to include this age group.

It's clear that Pfizer holds a significant edge in this age group right now. The company might be able to begin vaccinating teens within days. Parents who have been waiting for this moment probably won't wait around a little longer for other vaccines to reach this particular market. They likely will accompany their teenagers to the closest vaccine center.

One reason is to get their teens protected as soon as possible. And the second reason is to be sure their teens reach full immunity before the new school year -- or even before the start of summer activities. Pfizer and Moderna vaccines are given in two doses -- 21 and 28 days apart, respectively. And it typically takes the body about two weeks following the second dose to build up a full immune response. All of these details work in Pfizer's favor.

Teenagers represent a significant market opportunity for vaccine makers. More than 25 million Americans are between the ages of 12 and 17, according to Kids Count data. That equals 50 million vaccine doses. It's not yet clear how often full vaccination will take place. But experts have suggested it may be annual.

The majority of teens

Moderna may lose out on vaccinating the majority of U.S. teens in the near term. But that doesn't necessarily mean a loss in sales. The U.S. earlier this year purchased enough doses of the Pfizer and Moderna vaccines to immunize most of the population. Moderna is set to deliver the full order by the end of July.

The big question has to do with the future. If Pfizer becomes the vaccine of choice for teens, Moderna may find it difficult to take a big share of this market.

Pfizer's move also may impact new vaccine orders. Right now, Moderna is talking with countries regarding potential orders for next year. We can imagine that a government may order a higher number of vaccine doses if that particular vaccine can be given to a broader population. The risk is some countries may order more doses of the Pfizer vaccine for that very reason.

The good news, though, is that Moderna isn't far behind Pfizer when it comes to vaccinating teens. As mentioned above, Moderna is generating data and involved in discussions with the FDA. It seems likely the biotech company will bring its vaccine to teens before the start of the school year -- meeting its original goal.

Pfizer probably will vaccinate more teens than Moderna this year. And Moderna may have to convince some governments that its vaccine soon may be given to teens. But I don't expect arriving second instead of first to hurt this biotech player. Over time, there will be room in the teen market -- in the U.S. and abroad -- for both Pfizer and Moderna.