Please ensure Javascript is enabled for purposes of website accessibility
Log In Help Join The Motley Fool
Free Article Join Over 1 Million Premium Members And Get More In-Depth Stock Guidance and Research
By Travis Hoium - May 12, 2021 at 7:36AM

One company stands above the rest.

Fuel cell stocks have been on fire over the past year as investors speculate that hydrogen could be a growing fuel source over the next decade. But the bubble seems to be bursting with shares dropping sharply over the last few months.

As we look at which fuel cell stocks were fads and which can be growth stocks long term, there's one that stands out above the rest. Bloom Energy (BE -3.88%) is growing, becoming more profitable, and bringing fuel cells to markets that have trillions of dollars of revenue potential.

And that progress is what separates it from the competition like Plug Power (PLUG -5.66%), Ballard Power Systems (BLDP -8.17%), and FuelCell Energy (FCEL -8.19%) and makes it a top renewable energy stock. 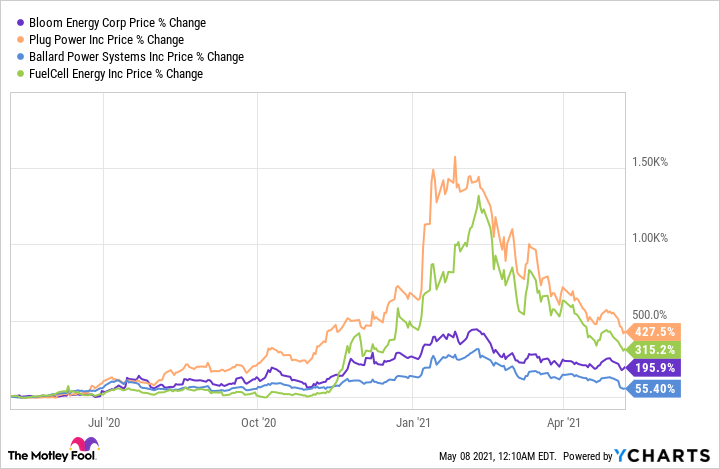 Fuel cells by the numbers

You can see below that fuel cell companies are relatively small by revenue, but Bloom Energy generates by far the most revenue in the industry, despite having a smaller market cap than Plug Power and Ballard Power Systems. 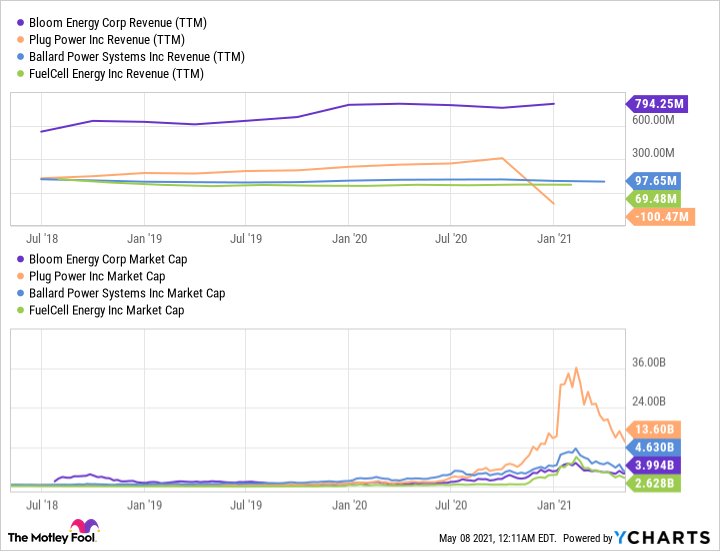 Revenue isn't the only indicator of success in a business. If a company can't translate revenue into gross margin and ultimately net income, it's destined to burn cash forever. On that front, Bloom Energy has better margins than the other companies mentioned, although its losses have been larger. Those losses were down this year, with the first-quarter 2021 net loss of $24.9 million being a big reduction from the $75.9 million loss a year ago. 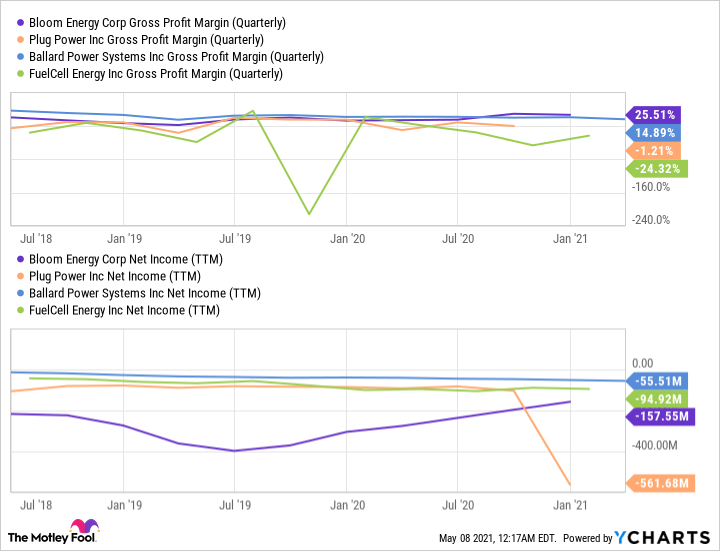 Net losses are a concern, but they're improving, and Bloom Energy looks like it's performing far better fundamentally than Plug Power, Ballard Power Systems, and FuelCell Energy. And there's a reason for that performance.

Another thing to consider in the fuel cell business is that Bloom Energy is serving different markets than Plug Power and Ballard Power. Bloom makes large fuel cells that are used for backup or auxiliary power for commercial buildings and utilities. Plug and Ballard are primarily materials-handling suppliers, which means they make products for forklifts, buses, commercial trucks, and similar small transportation markets.

Bloom Energy can also address different markets with its differentiated technology. It's working with Samsung Heavy Industries to develop a clean hydrogen-powered ship. The company has built a power plant in South Korea, and this year it will begin testing an electrolyzer -- a system that separates water into hydrogen and oxygen -- that can produce clean hydrogen. Microgrids are another place where Bloom Energy's fuel cell and electrolyzer will be able to address a growing market. These are all markets with huge scale and cost sensitivities, which gives Bloom an advantage over the competition.

Management thinks this solid oxide technology and the markets it will open up result in a more than $2 trillion total addressable market. That's a big number, but it shows just how early in the growth cycle Bloom Energy is.

I've highlighted a lot of why I think Bloom Energy is better than competitors based on technology and financial performance. But it's also worth highlighting how the company's operations are getting better over time.

In the recently reported first quarter of 2021, the company's shipments were up 40.2% year over year while revenue was up 23.8% and gross margin improved from 16.2% to 29.7%. In other words, the average sale price of fuel cells is coming down, but cost reductions are outpacing the reduction in pricing. This should allow Bloom Energy to grow its potential market into new areas -- and make more money.

These are great trends, and in a multitrillion-dollar potential market like fuel cells, it's a steal that Bloom Energy is trading at a discount to competitors given its better technology and fundamentals. This is the only fuel cell stock to buy today.