Please ensure Javascript is enabled for purposes of website accessibility
Log In Help Join The Motley Fool
Free Article Join Over 1 Million Premium Members And Get More In-Depth Stock Guidance and Research
By John Rosevear - May 13, 2021 at 2:13PM

It's not just Tesla, though that's part of it.

Shares of Chinese electric-vehicle maker NIO (NIO 1.39%) were trading lower on Thursday, after a Wall Street analyst said that the ongoing global shortage of semiconductors will continue to hold NIO's production down for a while longer.

As of 1:30 p.m. EDT, NIO's American depositary shares were down about 7.5% from Wednesday's closing price.

Citibank analyst Jeff Chung, who recently hosted a call with NIO management, wrote on Thursday that the chip shortage has remained "the key constraint" for NIO's production in May. NIO, along with Ford Motor Company, BMW, and Honda Motor, has suffered from the effects of a February fire at Japanese chipmaker Renesas, which has reduced some auto suppliers' access to chips even further for the time being.

According to Chung, NIO said that it felt the impact of the Renesas fire peaked in early May, and management now expects supplies to begin to improve in June or July. Chung maintained his previous hold rating on NIO's stock and his earlier price target of $57.60. 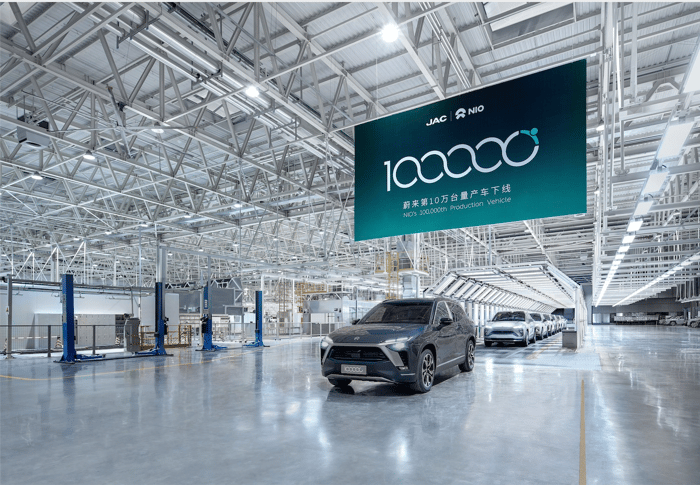 NIO built its 100,000th vehicle in April, but a chip shortage has slowed its production in May. Image source: NIO.

That's probably part of why NIO's stock was down on Thursday. Another factor is almost certainly the ongoing decline of electric-vehicle category leader Tesla, which seems to be pulling down other EV names for the time being.

Not all the news was bad, though. Chung also noted that NIO said market demand has recovered well since the Lunar New Year holiday period in February, and that it's confident that the pace of new orders will continue to increase.

While it's always hard to watch a growth stock lose ground in big moves day after day, I think that investors holding NIO can take some comfort from the longer-term story, which remains -- as Chung's note suggests -- pretty good.