Please ensure Javascript is enabled for purposes of website accessibility
Log In Help Join The Motley Fool
Free Article Join Over 1 Million Premium Members And Get More In-Depth Stock Guidance and Research
By Rick Munarriz - Updated May 17, 2021 at 8:18AM

Disney's only European theme park will finally reopen to guests on June 17.

The April 30 reopening of the original Disneyland resort in California leaves just one of the Walt Disney (DIS -1.96%) branded theme parks still shuttered, but that is about to change. Disneyland Paris announced on Monday that it will resume operations on June 17.

This is a bigger deal than you think, even if the French resort is home to two of the three least-visited Disney-branded theme parks in the world. Disneyland Paris is the only international theme park destination that is fully owned by the media giant. Disney has just minority stakes in Shanghai Disneyland and Hong Kong Disneyland. It only collects royalty and licensing fees from Tokyo Disney. 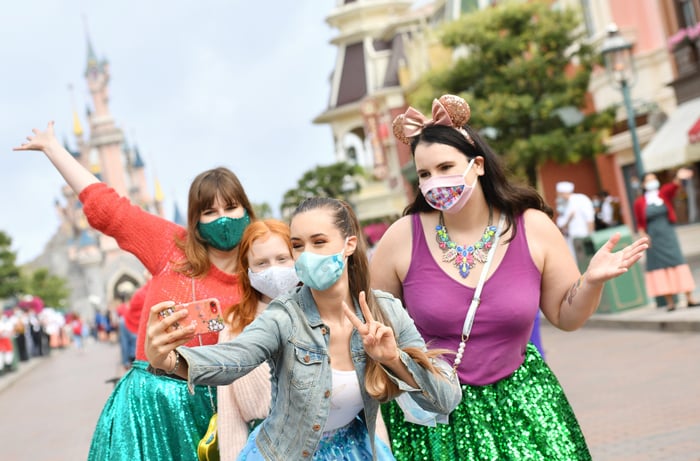 We can sing, we can dance

Unlocking the turnstiles at Disneyland Paris will be a pretty significant milestone. When the resort's gated attractions reopen on June 17, it will be the first time since Jan. 24, 2020, that all six of the Disney theme park resorts worldwide are open. We're talking about 510 days of Disney not having all of its branded destinations available.

None of this was by design, of course. Shanghai Disney was the first to close in late January of last year. Hong Kong Disneyland followed a day later. The pandemic hit different parts of the world in different ways, and COVID-19 restrictions varied by location.

Disneyland Paris briefly reopened last summer, only to close its two theme parks in October when European case counts began to climb again. We also can't fully assume that the June 17 reopening will happen. Disneyland Paris was supposed to open over the Christmas holiday season last year, but that didn't happen. A Feb. 13 resumption date was also revised to at least April 2. However, with vaccination rates starting to pick up globally, there's a fairly good chance that the resort will be back in business next month.

The four on-site lodging options will open in phases between June 17 and July 13, and this includes the new Marvel-themed makeover of Disney's Hotel New York, refashioned with a superhero art gallery theme. Disneyland Paris reopening is an important milestone for the media stock bellwether, but it doesn't mean that Disney's theme park segment will be back to full strength.

Disneyland Paris will open to a tight cap on guests counts initially, requiring advance reservations. Restrictions are starting to ease across the attractions, but we're still not back to where we were in 2019. The year-over-year comparisons for Disney's parks-helmed segment will start to get kind in the current quarter, pitted against the prior-year closures, but the results will continue to lag the top- and bottom-line results posted two years ago.

Disney investors don't need to be concerned, as long as COVID-19 case counts keep shrinking and global travel restrictions start loosening up in the coming months. All six Disney resorts are global destinations, so unlike regional amusement park operators, they need more than just local support. The turnaround will take time, but just the fact that all six park resorts should be open next month -- for the first time in 510 days -- is a big step in the right direction.