Please ensure Javascript is enabled for purposes of website accessibility
Log In Help Join The Motley Fool
Free Article Join Over 1 Million Premium Members And Get More In-Depth Stock Guidance and Research
By Neil Patel - May 18, 2021 at 7:52AM

The business is going through major changes, and investors should pay close attention.

The New York Times (NYT -1.11%), after reporting digital subscriber growth in the first quarter of 301,000, saw a somewhat muted reaction from Wall Street. It's very possible, however, that analysts were disappointed with this number, especially following an extraordinary 2020 in which the company added 2.3 million net new digital customers.

But shrewd investors understand that in order to make sound financial decisions, we must dig beneath the surface and think independently. It's always wise to keep the long-term story in mind, particularly when a business is undergoing a strategic shift that is already starting to pay off.

With that being said, here's one very important reason why investors may want to buy stock in The New York Times. 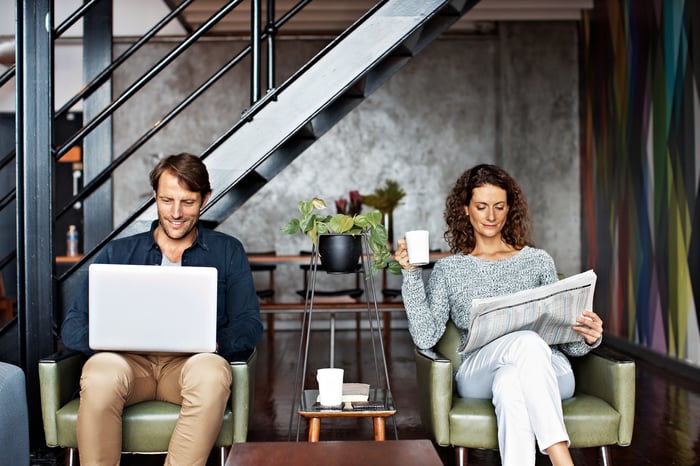 A decade ago, The New York Times launched digital subscriptions as a stand-alone product. It was a major strategic shift for the news company, and it demonstrated the business wanted to reduce its dependence on print advertising revenue.

Fast forward to today, and that move is bearing fruit.

In the most recent quarter, digital subscriptions were the largest source of revenue for the business, raking in $180 million, a whopping 38.1% year-over-year increase. This compares to print subscription sales, which totaled $149 million and were down 3.8% versus the prior-year period.

We're also seeing a resurgence in digital advertising as well. Sales in this segment soared 16.3% in the quarter to reach $59 million, and it now accounts for 61% of all advertising revenue for the company. As print advertising continues its secular decline (down 31.6% in the quarter), expect digital's share to keep marching higher.

This is a digital-first company now

The New York Times is now at a point where its digital business is more than offsetting declines in its print business. This is significant for three reasons.

First, digital subscriptions extract higher margins than print. Since the product (the news) is read online, the company doesn't have to pay for paper, ink, and shipping, thus reducing a sizable variable cost component. It basically costs The New York Times nothing to serve every additional digital customer, which leads to the next point.

Earnings growth is set to accelerate, and the first-quarter results demonstrate this. While overall revenue increased just 6.6%, operating profit skyrocketed 89.1%. The cost of revenue line item, which includes content production and is the largest expense, expanded at just a 3.1% clip in the quarter. This showcases the operating leverage currently inherent in the business model.

Finally, as previously mentioned, digital advertising sales are starting to grow. Like any other newspaper, The Times originally made a killing from print ads. Thanks to the internet, that business is dying. But because The New York Times now has seven million digital-only customers (and 100 million registered users), it provides a valuable platform for marketers looking to allocate online advertising dollars.

"Our first-quarter digital advertising revenue is better than the guidance we gave in early February," CFO Roland Caputo said on the earnings call. What's more, management expects ad revenue to accelerate in the current quarter.

Not your grandpa's New York Times

Sure, subscriber growth in the first quarter disappointed some investors, but that's coming off a news year that included a pandemic, heightened racial and social justice issues, and a polarizing presidential election. It's not surprising that there has been a slowdown in recent months.

Investors need to accept quarter-to-quarter volatility and focus even more intensely on the long term, especially after a year that changed consumer behavior in ways we still don't fully understand.

The New York Times is officially a digital-first media business, and its latest results prove it. This is a very good reason why investors should consider buying the stock.