Please ensure Javascript is enabled for purposes of website accessibility
Log In Help Join The Motley Fool
Free Article
Join Nearly 1 Million Premium Members And Get More In-Depth Stock Guidance and Research
By Rachel Warren – May 18, 2021 at 8:17AM

These are two marijuana stocks you can hold for decades.

The U.S. cannabis industry is growing at an incredibly fast rate and bursting with opportunity for shrewd long-term investors. A number of pot stocks have reported double- or even triple-digit balance sheet gains during the pandemic and surged to new all-time highs in the process. And it's not too late for new investors to seize on the upside potential these top marijuana stocks have to offer.

Today, we're going to take a look at two such companies that have built on a strong track record of growth throughout the pandemic and have plenty of growth left for investors to tap into. 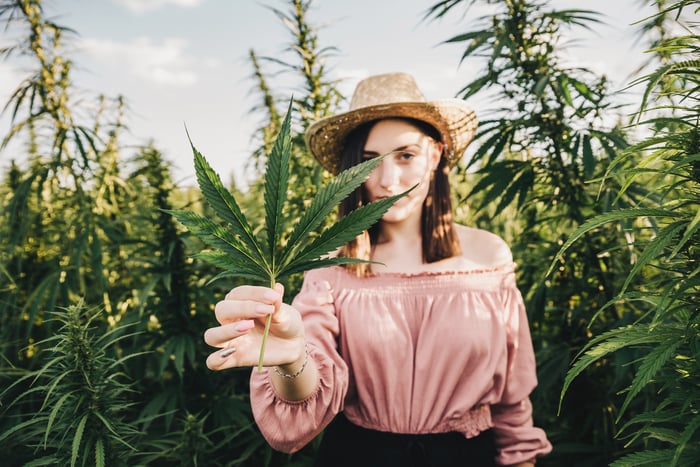 Small-cap pot stock Ayr Wellness (AYRW.F 2.29%) owns a family of cannabis brands under which it sells everything from oil to terpenes to and edibles. The company also owns and operates a chain of marijuana dispensaries in five states: Arizona, Florida, Massachusetts, Nevada, and Pennsylvania.

Marijuana is fully legal for both medical and recreational use in Arizona, Nevada, and Massachusetts, while Florida and Pennsylvania are solely medical-use states. Florida, where Ayr Wellness maintains a heavy presence, still likely faces a long road to full legalization but has a thriving medical marijuana market that ranked third overall in nationwide cannabis sales in 2020. And in Pennsylvania -- a key market where medical marijuana sales hit nearly $1 billion in the past year alone -- a bipartisan group of lawmakers is currently working to expand legalization to recreational use.

In short, there's still broad untapped growth potential for Ayr Wellness to build upon within these key markets. Florida, Arizona, Massachusetts, and Nevada were all listed among the 10 top-selling cannabis states in 2020. And Ayr Wellness is growing its retail footprint at a fairly rapid rate. On April 26, management announced that the company had just opened its 50th dispensary, which was also its 34th retail store in Florida.

The company is also in the process of acquiring Garden State Dispensary in New Jersey. The landmark deal, which is expected to close in the third quarter of this year, will give Ayr Wellness the leading marijuana retail presence in the state. Garden State Dispensary has three open retail locations, a 30,000-square-foot cultivation and production facility, and another 75,000 square feet of space that is still being developed. New Jersey is also one of more than a dozen states where marijuana is fully legal for both medical and recreational use. While medical marijuana has been legal in the state for more than a decade, recreational use was only just signed into law this past February.

In addition to its fast-growing retail presence, Ayr Wellness is also quickly expanding its stable of cultivation facilities. For example, the company just closed on the acquisition of a 9,000-square-foot processing facility in Ohio at the end of March.

2020 was a year of robust growth. Despite retail closures earlier in 2020, it was a year of robust growth, with the company reported 25% revenue growth from 2019, and its gross profits surged by nearly 300%. During the 12-month period, adjusted EBITDA increased 63%. The fourth quarter of 2020 was a particularly notable period of growth, with revenue surging by 48% and adjusted EBITDA by 111% on a year-over-year basis.

These kind of growth numbers aren't anything new for Ayr Wellness. For example, in 2019, the marijuana stock's revenue skyrocketed by 75%. This little-known pot stock has oodles of potential left to explore, and long-term investors who scoop up this gem now could see some serious portfolio rewards in the coming years.

Innovative Industrial Properties (IIPR -0.55%) is another highly resilient investment in the world of pot stocks. The company is different from the average cannabis play for a few reasons.

First, it operates as a real estate investment trust (REIT). Innovative Industrial Properties owns an extensive portfolio of greenhouse and industrial facilities, which it leases to licensed growers of medical cannabis. This has allowed the company to sidestep many of the legal headwinds that often adversely impact retailers and growers, while it capitalizes on the growing wave of cannabis legalization sweeping the country.

Second, Innovative Industrial Properties is one of a small handful of pot-related stocks that actually pays a dividend. And it has an above-average yield of 3% (the average stock trading on the S&P 500 pays a dividend yielding around 2%).

Third, Innovative Industrial Properties has continued to consistently expand its portfolio -- and its balance sheet -- at a lightning-fast rate.

The company grew revenue by 162% in 2020, while its bottom line popped by 191%. Another key metric for tracking the performance of REITs in the context of their earnings is adjusted funds from operations (AFFO), and Innovative's AFFO skyrocketed 180% last year. The REIT also reported stellar results for the first quarter of 2021: Its top and bottom lines grew by 103% and 122%, respectively, while its AFFO spiked 116% from the year-ago period.

Innovative Industrial Properties pumped a whopping $620 million into acquisitions and new investments in current portfolio holdings last year. The company has also made several new acquisitions in 2021, including a recent purchase of a 239,000-square-foot industrial space in Pittsburgh.

The REIT's exceptional performance throughout the past year has demonstrated its resilience as an investment in the worst days of the market. If you, like many other investors right now, are worried that another market crash or correction might be looming, this all-weather marijuana stock is the kind of golden egg you'll want to buy and hold in your basket for a rainy day.

Rachel Warren has no position in any of the stocks mentioned. The Motley Fool owns shares of and recommends Ayr Wellness and Innovative Industrial Properties. The Motley Fool has a disclosure policy.