Please ensure Javascript is enabled for purposes of website accessibility
Log In Help Join The Motley Fool
Free Article Join Over 1 Million Premium Members And Get More In-Depth Stock Guidance and Research
By Keith Speights - May 18, 2021 at 4:52AM

The biotech came out of nowhere to vault near the top of this survey ranking.

Pfizer (PFE -1.40%) edged out Moderna (MRNA -5.06%) in winning Emergency Use Authorization (EUA) for its COVID-19 vaccine. It's likely to be the first to secure full approval from the U.S. Food and Drug Administration (FDA) for its vaccine as well.

The big drugmaker also tops Moderna on nearly every metric you can think of. Whether it's revenue, profit, market cap, or pipeline size, Pfizer easily beats its rival. However, there's one surprising ranking where Moderna handily beats Pfizer.

Axios and Harris Poll recently released their annual ranking of the companies with the best reputations. And Moderna bested Pfizer as the top healthcare company. 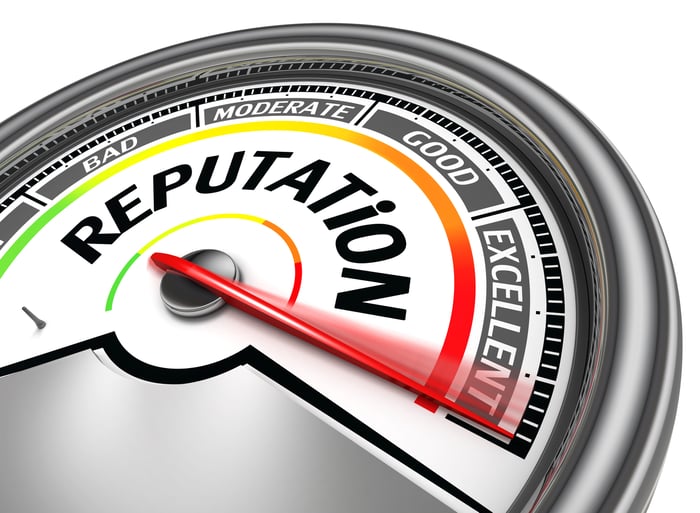 Axios and Harris surveyed nearly 43,000 Americans between April 8 and April 21 of this year. These participants were asked to identify the companies with the greatest public awareness. Axios/Harris then surveyed a second group of Americans to rank the top 100 of the highly visible companies based on their corporate reputations.

Moderna came in at No. 3, behind only Patagonia and Honda Motor Company and one spot ahead of Chick-fil-A. The biotech didn't make the top 100 list at all in the 2020 survey.

Only one other healthcare company landed a spot in the Axios-Harris top 10 -- Pfizer. The big drugmaker came in in seventh place. While Pfizer trailed Moderna, it moved 54 spots higher compared to last year's survey.

It's pretty obvious why Americans think so highly of Moderna and Pfizer. The two companies' coronavirus vaccines have played a major role in helping return life to a semblance of normalcy throughout much of the U.S.

What about the other company with a COVID-19 vaccine that has been given to many Americans? Johnson & Johnson didn't fare quite as well in this year's reputation ranking. The healthcare giant took the No. 72 position, down four spots from the 2020 survey. The temporary pause in administering J&J's vaccine likely contributed to the company's slide.

You might find it at least somewhat surprising that Americans would view Moderna's corporate reputation in a better light than Pfizer's. After all, Pfizer has been in the public eye for a long time, whereas Moderna only became a household name last year.

Pfizer also was featured in a National Geographic documentary about the making of its COVID-19 vaccine. Moderna didn't receive such exposure on TV.

It's possible, though, that Americans' familiarity with Pfizer worked against it. Big pharma companies, including Pfizer, have come under fire in the past for their high drug prices. Moderna's coronavirus vaccine was its first product on the market, so the biotech hasn't received the negative publicity that Pfizer and other major drugmakers have.

Americans also like to pull for the underdog. Moderna might qualify for this label after beating out many much larger drugmakers with its rapid development of a safe and highly effective vaccine against COVID-19.

All companies want to have great reputations. But does it really matter that Moderna beat Pfizer in the Axios-Harris reputation rankings? Probably not.

For one thing, the two companies weren't all that far apart in the survey results. Both Moderna and Pfizer clearly enjoy excellent corporate reputations after the successes of their respective coronavirus vaccines.

It's also important to note that the American public can change its collective mind pretty quickly. Last year, Clorox ranked No. 1 on the reputation ranking; Zoom Video Communications also vaulted onto the list. Neither was surprising, considering the amount of surface-cleaning and videoconferencing that was going on a year ago. However, neither of these companies even made the top 100 in the 2021 survey.

Also, how Moderna and Pfizer rank on the Axios-Harris survey isn't going to impact their ability to secure additional supply deals with the U.S. government (or any other government, for that matter.) For an individual person, a good reputation can be worth more than silver and gold. For these two healthcare stocks, though, major supply agreements for 2022 and beyond could be worth more than their high reputation rankings.