Please ensure Javascript is enabled for purposes of website accessibility
Log In Help Join The Motley Fool
Free Article Join Over 1 Million Premium Members And Get More In-Depth Stock Guidance and Research
By Adria Cimino - May 18, 2021 at 5:00AM

Last year's massive gain was only the beginning of the story.

Novavax (NVAX -5.56%) was last year's stock-market star, with gains of more than 2,000%. The biotech company impressed investors as it brought its coronavirus vaccine candidate through clinical trials and won $1.6 billion in investment from the U.S. government. The shares extended gains early this year, climbing 186% through a peak in February. But lately, things haven't been so easy.

Rivals Pfizer and Moderna have fully vaccinated more than 30% of Americans...while Novavax remains on the sidelines. Most recently, the company postponed its regulatory requests; it now will complete requests for authorization in the third quarter instead of the second. As a result, its shares have dropped more than 40% since the beginning of the month.

But that doesn't mean you should flee Novavax. Instead, here's why you should consider buying this biotech stock on the dip. 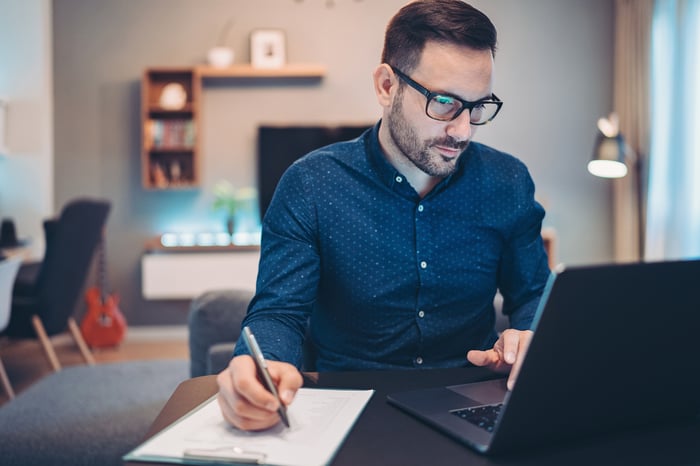 Novavax obviously won't benefit from the initial vaccine rollout in the U.S. The country bought enough doses from Pfizer and Moderna to cover most Americans. Novavax may even struggle to carve out market share in the following year: The U.S. may continue to opt primarily for Pfizer and Moderna if it's satisfied with the performance of their products.

But Novavax may stand out in a big way internationally. The company is in talks with the European Commission about a possible supply agreement. And several European countries are turning their backs on AstraZeneca and Johnson & Johnson, after some individuals who received their vaccines developed rare but sometimes deadly blood clots.

European Commission President Ursula von der Leyen recently announced a deal for 900 million Pfizer doses through 2023. Importantly, von der Leyen also said that "other contracts and other vaccine technologies will follow." We might imagine Novavax as one of the beneficiaries.

So far, Novavax has agreements signed for the delivery of 200 million doses to various countries. And it has signed an advance purchase agreement for 1.1 billion doses with Gavi, the Vaccine Alliance, which covers low- to middle-income countries. Novavax says that even these sales at lower prices will help build the business at a rapid pace. In fact, the company expects to produce billions of dollars in revenue within the next four to six quarters.

A winner in the long term

All of this represents a near-term opportunity. But what about the longer term? Here, Novavax could be a winner as well.

Novavax recently said its combined influenza/coronavirus vaccine showed encouraging results in preclinical studies. In ferrets, vaccination produced high antibodies against both viruses two weeks after an initial dose, then even higher levels after a second dose. A study exposing vaccinated hamsters to the coronavirus showed little or no virus in their respiratory tracts.

The launch of a combined vaccine would happen farther down the road. The company must reproduce positive findings in human trials. Novavax says it expects to start clinical studies of the potential product later this year. And it would aim to bring such a product to market by 2025. Novavax is basing this candidate on its investigational coronavirus vaccine combined with NanoFlu, its flu vaccine candidate.

NanoFlu met all primary endpoints in its pivotal trial last year. And data from the U.K. clinical trial of the coronavirus vaccine was favorable -- showing 96.4% efficacy against the original version of SARS-CoV-2. So, it's clear Novavax has the tools to make this sort of combination happen.

A look at the stock

Now let's look at the stock price. Sure, Novavax may have skyrocketed last year and early this year. But if we consider its potential for revenue, it may not be so expensive after all. The average analyst estimate for earnings per share next year is $32.07. EPS in the future could move higher if Novavax is successful with a booster shot -- now being tested in phase 2. And today's work on variant-specific vaccine candidates and the combined flu/coronavirus candidate may result in other profit drivers.

Novavax shares aren't the best choice for the cautious investor; they've been volatile. And they're sure to react -- positively or negatively -- to any coronavirus news. So this biotech stock is a better bet for investors who can handle some risk, and don't mind seeing their investments perform a yo-yo move here and there. But considering the clinical trial data we've seen so far, I'm confident that over time Novavax will produce major revenue -- and lasting share price gains will follow.