Please ensure Javascript is enabled for purposes of website accessibility
Log In Help Join The Motley Fool
Free Article Join Over 1 Million Premium Members And Get More In-Depth Stock Guidance and Research
By Courtney Carlsen - Updated May 18, 2021 at 11:31AM

Progressive has posted impressive margins for years, and is handily beating the S&P 500 in the process.

When investors think of a money-making machine, insurance isn't usually the first business that comes to mind. However, Warren Buffett has often called insurance the industry that's most important to the company he's run for more than five decades, Berkshire Hathaway. In fact, insurance has been a cornerstone of Berkshire's growth since its 1967 acquisition of National Indemnity.

One insurer that has continually crushed it is Progressive (PGR 0.18%). Progressive is a well-run company with healthy profit margins. Not only that, but since 2015, Progressive has outperformed the broader market, providing investors with a total return of 379% compared to the S&P 500's total return of 128%. Even after that run of success, its stock trades for a bargain price.

Despite all that, Buffett and Berkshire don't own Progressive. Should you? 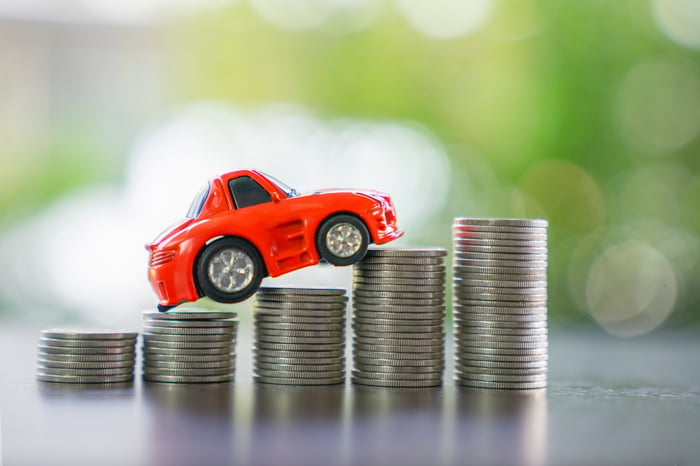 Progressive continues to crush its competition by maintaining very attractive metrics on the policies that it underwrites. The company has done a tremendous job of growing its top and bottom lines since 2015, with revenue and net income growing by compound annual growth rates of 15% and 35%, respectively -- a testament to the insurer's skill at underwriting profitable insurance policies.

One reason is an underappreciated focus on technology. While many companies have been coming out with telematics programs in recent years, Progressive was the company on the cutting edge. The company's Progressive Snapshot product, also known as usage-based insurance, was added in 2011, and is just one of the drivers of Progressive's growth over the decade.

Extreme weather couldn't bring it down

Progressive's growth was on full display in the first quarter, with strong top- and bottom-line figures. The insurer increased total revenue by 22.8%, bringing in $11.4 billion in total.

This revenue growth was boosted by two things. First, net premium growth was up 10.5% from last year to $10.4 billion. Second, net gains from investments were $585 million, up from last year's net loss from investments of $553 million when asset prices plummeted in the early stages of the pandemic. Total expenses were up in the period as well, with losses and loss adjustment expenses increasing 15.5% to $7.1 billion. This was due largely to extreme weather events in the quarter. Despite this, net income was up 111% from last year to $1.5 billion.

Winter storms in Oregon and Texas as well as tornadoes in Texas and Alabama caused significant losses to its property line of coverage in the first quarter. This was elevated due to $144.6 million in catastrophe losses, after reinsurance, which added 30.6 points to the combined ratio and brought this ratio on its property line of coverage to a brutal 115%. Combined ratio is a key metric in the insurance industry that measures a company's profitability and operating performance. A ratio below 100% means that the company is profitable, while a ratio over 100% means that the company is spending more on claims and operating expenses. The property line of coverage saw a $70 million loss in the quarter.

However, investors need not worry. The company was buoyed by its bread and butter -- personal lines of auto and home coverage -- which brought in a $962 million profit, along with its commercial lines, which brought in another $228 million in profits. And despite the hit from its property line, its total combined ratio was a stellar 89.3% in the quarter. Even better, Progressive hasn't had an annual combined ratio over 100 since 2000, showing the insurer's ability to write profitable policies across two decades.

A company worth holding in a variety of market environments

During inflationary times, insurance companies can perform better because they put excess cash to work to generate investment income. While Progressive is less reliant on investment income than competitors, it would still benefit from higher interest rates. Not only that, but its position as a leader in personal auto insurance coverage and its impressive underwriting ability make this the best insurance company to own. This skill in underwriting is the reason Progressive has been a cash cow and has outperformed the S&P 500 as well as industry competitors Allstate and Travelers for years now. 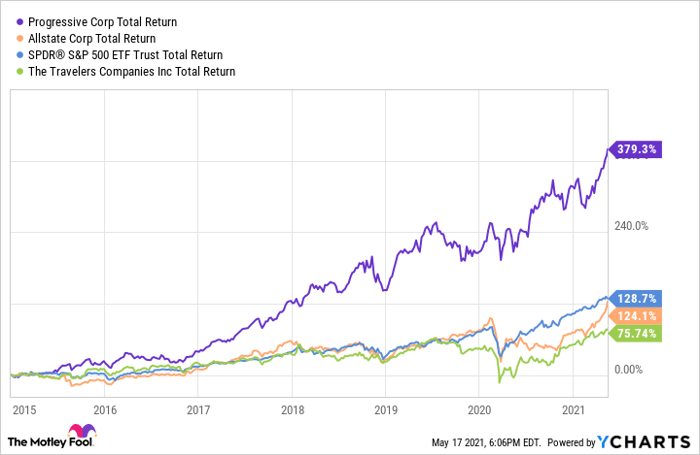 Going back five years, Progressive's total return swamps the S&P 500 and other competitors in the property and casualty insurance space. This is a testament to the company's business model and skill at underwriting.

And even with these returns, the stock's price-to-earnings ratio is a mere 9.7 as of Monday's close, putting it on the cheap end of its history over the past 10 years.

Progressive's ability to print cash and achieve steady growth over years, coupled with economic tailwinds that could work in the insurer's favor, make it deserving of a spot in any investor's portfolio.

1 Reason Why This Is My Favorite Insurance Stock Right Now

Does Berkshire Hathaway Think Progressive Is a Better Auto Insurer Than GEICO?