Please ensure Javascript is enabled for purposes of website accessibility
Log In Help Join The Motley Fool
Free Article Join Over 1 Million Premium Members And Get More In-Depth Stock Guidance and Research
By Jon Quast - Updated May 19, 2021 at 8:36PM

Grayscale Bitcoin Trust is a fund that only holds Bitcoin. Therefore, today's drop is to be expected. It was down 11% earlier Wednesday. Ebang manufactures equipment for mining Bitcoin and mines some itself. Therefore, a drop in the price of Bitcoin is concerning for shareholders. And for its part, The9 mines cryptocurrencies like Bitcoin and Filecoin (FIL 1.23%) and the price of Filecoin is down even sharper than Bitcoin right now, declining 27% over the past 24 hours. 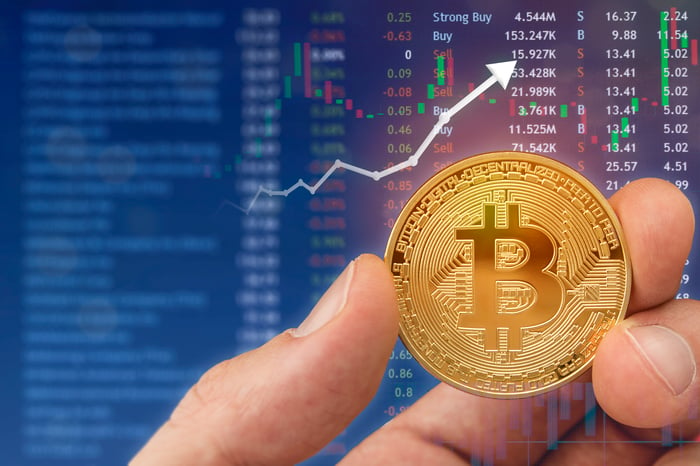 Bitcoin went from a modest pullback to a full crash around the time Tesla CEO Elon Musk announced his company would no longer accept the cryptocurrency as a method of payment, citing environmental concerns with the process of Bitcoin mining. Coincidentally, the People's Bank of China (PBOC) is also getting stricter with digital currencies. As reported by Reuters, China is now prohibiting its citizens from using cryptocurrencies like Bitcoin as a form of payment.

The China ban on cryptocurrencies seems to be what sparked today's drop for Bitcoin. For a company like The9, the update from the PBOC is a material development for shareholders. The company aims to offer various blockchain products and services, not just cryptocurrency mining. Blockchain technology has greater application than just transacting with digital currencies. For example, blockchain can be used for things like inventory management. The good news is that these kinds of applications don't seem to be affected by the update from China.

However, as a Chinese company, The9 won't be able to pursue anything it had in the pipeline for using cryptocurrencies as a form of payment. By the same token, a major use case for cryptocurrencies has now been taken away from the planet's most populous nation and second largest economy.

Cryptocurrency prices are driven by supply and demand. And now with China implementing steeper restrictions for how it can be used, there could potentially be less demand for cryptocurrencies. This could be a further drag on the price of Bitcoin.

Ebang's revenue plummeted in 2020, down 83% year over year to just $19 million. However, shareholders have been optimistic that demand for its mining equipment would pick up with the price of Bitcoin and other cryptocurrencies steadily rising.

That thesis is now in question. If the price of Bitcoin and other cryptocurrencies continues falling, it could discourage mining activity, resulting in more losses for Ebang and its peers. 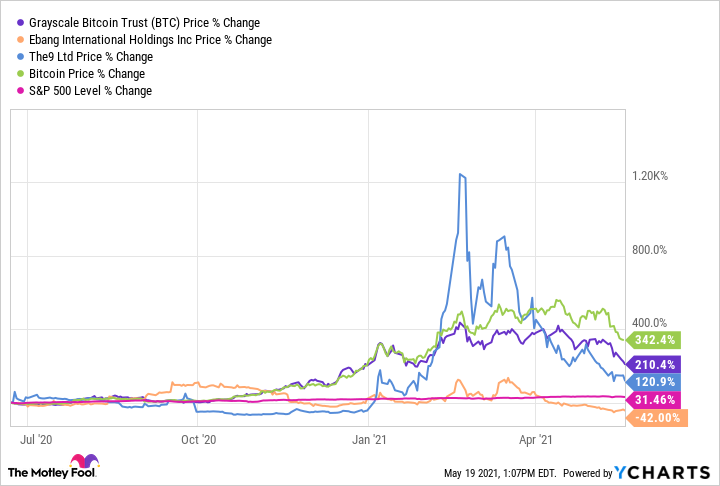 The prices of Bitcoin and Bitcoin stocks have been very volatile over the past year compared to the S&P 500. GBTC data by YCharts.

Regarding Grayscale Bitcoin Trust, the Bitcoin it holds is worth $35.61 per share at its current price of $37,600. This suggests shares are undervalued right now. But shares of the trust rarely trade at the exact value of their Bitcoin holdings. In reality, they tend to either trade at a discount or a premium, depending on investor sentiment toward the future price of Bitcoin.

To be sure, that future price is the most important thing for investors in Grayscale Bitcoin Trust, Ebang, and The9 stocks. And that's a hard thing to predict. On one hand, companies like MicroStrategy continue to support and buy the cryptocurrency, providing ongoing demand that could help send prices higher.

One the other hand, since 2014, the price of Bitcoin has plummeted more than 50% on two separate occasions. So the current plunge isn't unprecedented and might not be over yet. And while Bitcoin has gone on to higher highs in the past, these came after long periods of trading sideways. So who knows how long it will be before Bitcoin fully rebounds.

What happens with the price of Bitcoin for the remainder of 2021 is up for debate. But here's something we can say with more certainty: Cryptocurrency has been volatile in the past and it's likely to remain volatile. Consequently, shareholders of these stocks should be prepared for an ongoing wild ride.