Please ensure Javascript is enabled for purposes of website accessibility
Log In Help Join The Motley Fool
Free Article Join Over 1 Million Premium Members And Get More In-Depth Stock Guidance and Research
By Royston Yang - May 19, 2021 at 7:43AM

The connected home exercise equipment company plans to expand internationally even as it grapples with product recalls.

The pandemic has altered our lives in ways we could not have imagined before. Vast numbers of businesses have been forced to go digital, and telecommuting is now a norm for many salaried workers. Exercise, too, has also shifted away from gyms and into the home, and Peloton (PTON 13.60%) has been a prime beneficiary of that trend. Its membership base and fitness subscriptions have soared since COVID-19 appeared.

The stock price of the exercise bike and treadmill company rose rapidly after it went public in September 2019 at $29 a share. And while it has lost ground since peaking in January at above $167, its current price in the neighborhood of $96 is still more than triple where it began trading.

For those not sure what's special about Peloton's equipment, they come with embedded screens that allow exercisers to join live and recorded fitness classes, providing a simulation of a gym environment. Customers who sign up for the company's connected fitness subscriptions can enjoy guided workouts in the comfort of their own homes.

Peleton has grand plans to grow its sales internationally and expand its product line. But does its outlook qualify this stock as a buy? 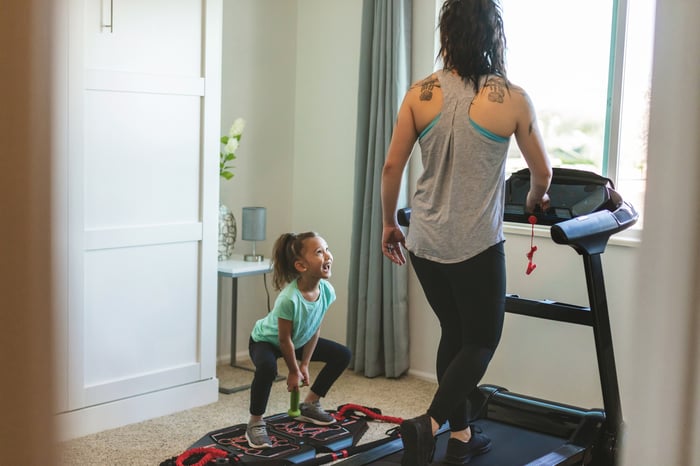 Peloton's IPO came at a serendipitous moment. The company was already riding on a trend of healthy living that was spurring people to exercise more. When, just a few months later, the onset of the pandemic led to lockdowns and gym closures, many people who still wanted to keep fit started purchasing treadmills and exercise bikes. This led to such a strong surge in demand for Peloton's products that it outstripped the company's manufacturing capacity, and orders became seriously backlogged.

The numbers speak for themselves. In Peloton's fiscal 2021 third quarter, which ended March 31, total membership more than doubled to 5.4 million from 2.6 million a year ago. The company also tacked on a million new users sequentially from the 4.4 million it had closed its fiscal second quarter with.

Connected fitness subscriptions for the quarter surged year over year from 886,000 to more than 2 million, while total workouts more than quadrupled to 149.5 million. These gains have boosted the company's financials -- for the first nine months of the fiscal year, subscription revenue more than doubled year over year to $590.6 million while total revenue jumped 153% to $3.1 billion, buoyed by the sale of fitness equipment. Peloton also enjoyed a seven-fold jump in operating cash flow from $49.1 million to $359.3 million.

Investors can anticipate several growth catalysts for the company. Late last year, it announced its acquisition of Precor, one of the world's largest commercial fitness equipment providers, for $420 million. This purchase benefits the company in two ways. First, it will increase Peloton's U.S. manufacturing footprint and help to ease the delays in order fulfillment. Second, it expands its opportunity to penetrate the commercial fitness market.

Plans were also announced two months ago for Peloton's expansion into Australia, its first foray into the Asia-Pacific region. The official launch will come in the second half of 2021, and Peloton will be setting up interactive showrooms in cities such as Sydney and Melbourne to let users try out its products and experience its interactive classes.

Not all is rosy, though. The company recently issued a pair of recalls for its Tread+ and Tread treadmills after a spate of incidents in which children and pets were pulled underneath them. More than 70 incidents of injuries and one death were reported, and CEO John Foley has admitted that the company was wrong not to engage customers on these issues right from the start.

CFO Jill Woodworth estimated that the revenue impact from these recalls will be around $165 million. That includes not only lost revenues from its temporary halt to the sale of the machines, but also the refunds that will be given to customers who return them. The company will also waive its subscription fees for treadmill owners for three months. And apart from the immediate financial impact, Peloton's reputation has taken a hit.

Although Peloton made missteps in handling the safety issues around its treadmills, its CEO has been up front in admitting his mistake, and the company is not shirking its responsibility when dealing with customer complaints. Peloton intends to iron out the problems with these two products and then reintroduce them into the market.

The brand remains popular and management's candor should reassure customers. Peloton's shares plunged when news of the recall first broke out, but they have subsequently recovered some of that lost ground. Long-term investors should make use of these temporary troubles to load up on shares of the company, as this will likely represent just a short-term blip in its growth story.

I believe that the growth stock thesis remains intact for Peloton, and that its business initiatives will bear fruit for the company and its shareholders for years to come.