Please ensure Javascript is enabled for purposes of website accessibility
Log In Help Join The Motley Fool
Free Article Join Over 1 Million Premium Members And Get More In-Depth Stock Guidance and Research
By Courtney Carlsen - Updated May 19, 2021 at 11:15AM

The mortgage lender posted strong growth year over year, but headwinds from rising interest rates could pose a problem for the industry.

Many finance lenders used the red-hot market as an opportunity to go public. Big names like Rocket and UWM Holdings hit the public markets last year, while loanDepot (LDI -15.69%) made its public debut earlier this year.

It's been a good start for loanDepot, which reported solid first-quarter earnings, but investors are cautious as mortgage markets cool down amid gradually rising interest rates. Not only that, but the lender faces intense competition in the mortgage space as competitors aggressively look to grab market share.

Following the housing crisis in 2010, loanDepot saw an opportunity to disrupt legacy lenders using technology, through its mortgage platform called mello. Mello is an end-to-end platform that streamlines the lifecycle of the mortgage loan, including customer acquisition, applications, processing, and servicing. The platform makes user interaction easy, and leverages machine learning for underwriting parameters to automatically determine and validate loans and reduce cycle times. 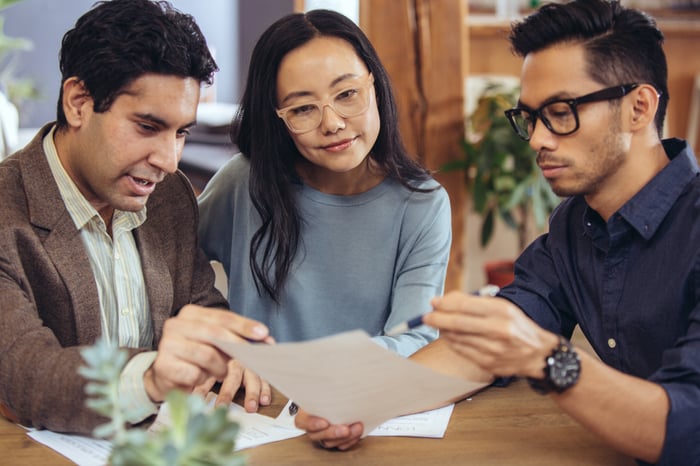 In the first quarter, loanDepot grew revenue to $1.3 billion, an impressive 171% increase from the same quarter last year. However, compared to the fourth quarter, revenue was up 1.4% -- showing a drastic slowdown caused by a cooling housing market.

Quarterly originations were up 11% in the quarter from the fourth quarter as well. While the company expected interest rates to rise, management noted that they rose faster than expected in the first quarter. These rising rates mean a slowdown in mortgage originations, especially for mortgage refinancing. Investors shouldn't be too surprised, though, given that Fannie Mae and Freddie Mac projected mortgage originations would drop anywhere from 10% to 25% this year.

In an effort to boost new purchase originations, the lender entered into joint ventures with home builders and a chartered bank during the quarter. Agreements with Schell Brothers, a builder of energy-efficient homes in Delaware and Virginia, and LGI Homes, which operates in 20 states, including California, Texas, Florida, and North Carolina, could drive further mortgage originations given strong demand for homebuilding this year.

While mortgage originations have been slowing down, loanDepot management is confident in the company's position and looks to capitalize on a period of consolidation in the mortgage market.

2020 saw record activity, and 2021 will likely enjoy a spillover effect from lower interest rates. I like the company's partnerships with homebuilders, which should boost its purchase loan originations, but as an investor I'm cautious when it comes to the mortgage industry -- especially in the residential space. Economists at Freddie Mac project that single-family mortgage origination activity will decline to $3.5 trillion in 2021 and $2.4 trillion in 2022, driven by gradually rising mortgage rates. Not only that, but the lender faces stiff competition from Rocket Companies and UWM Holdings, which are both engaging in aggressive strategies to grab market share as well.

While the company is making progress, the current conditions make me cautious of loanDepot -- and others in the industry for the time being.

Here's Why loanDepot Is Reducing Its Mortgage Banking Footprint

Why Shares of loanDepot Are Falling Today

Is loanDepot a Buy?