Please ensure Javascript is enabled for purposes of website accessibility
Log In Help Join The Motley Fool
Free Article Join Over 1 Million Premium Members And Get More In-Depth Stock Guidance and Research
By Rich Smith - May 19, 2021 at 11:55AM

Blue Origin's ticket auction begins -- and it turns out to be really popular.

Shares of space tourism pioneer Virgin Galactic Holdings (SPCE -0.57%) stock sank as much as 8% in early trading Wednesday before recovering to about a 2.4% loss as of 11:15 a.m. EDT.

But it's not Virgin Galactic's fault this time. Instead, blame Blue Origin. 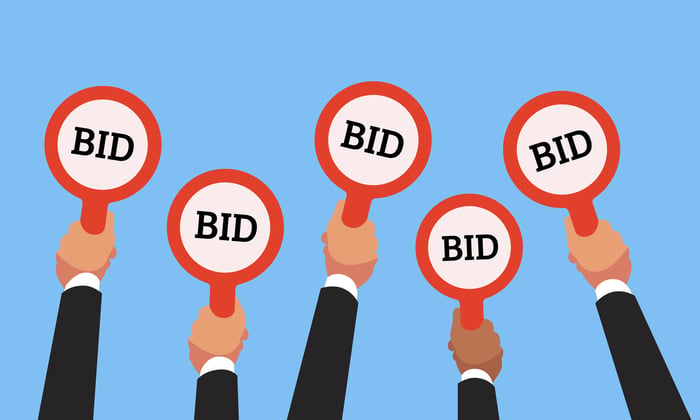 As you may have heard, Jeff Bezos' Blue Origin space company plans to begin running commercial space tourism flights on July 20 -- at least six months before Virgin Galactic can get its own space tourism business up and running, according to the experts.

You may also have heard that Blue Origin is auctioning off its very first space ticket to the highest bidder (then donating the proceeds to its Club for the Future educational foundation). Well, the company just unsealed the bids in that auction, and so far, according to Blue Origin's auction site, the current high bid for a ticket to space is $2.4 million.

Bids are still coming in and, indeed, the auction won't wrap up until June 12, when well-heeled space tourists will get the chance to snipe the ticket live and online. That means that, long after Virgin Galactic's self-imposed deadline for resuming space test flights sometime in May has come and gone, Blue Origin will still be hyping its competing space business, and still building excitement for space tourism flights aboard its New Shepard spacecraft, rather than Virgin Galactic's VSS Unity spaceplane.

That's one way to look at it, I suppose.

On the other hand, though, you could also say that in conducting its auction so publicly, Blue Origin is also conducting a bit of free market research for Virgin Galactic -- gauging the depth of demand for space tourism, and figuring out just how much people might be willing to pay for a space ticket. And the higher bids on Blue Origin's ticket go the more attractive Virgin Galactic's $250,000-a-ticket price might look to would-be space tourists.

Long story short, maybe Virgin Galactic investors shouldn't be looking at this auction as a bad thing at all, but as a good thing for their space company, too.