Please ensure Javascript is enabled for purposes of website accessibility
Log In Help Join The Motley Fool
Free Article Join Over 1 Million Premium Members And Get More In-Depth Stock Guidance and Research
By Timothy Green - Updated May 20, 2021 at 9:26AM

Coinbase's profits depend on its users believing they can strike it rich.

For anyone who bought into the Coinbase (COIN -11.27%) IPO in April, it hasn't been a fun month. Shares of the cryptocurrency trading platform are now trading below their IPO price of $250, and they've been practically cut in half from their all-time high.

At first glance, the stock looks incredibly cheap. Coinbase reported revenue of $1.6 billion in the first quarter, up from just $179 million in the prior-year period. Net income surged to $771 million, up from just $32 million. At the current run rate, Coinbase trades for seven times sales and 15 times earnings.

But Coinbase stock isn't cheap because the business isn't sustainable. Coinbase earns revenue by charging fees to those trading cryptocurrencies on its platform. That's great when the prices of Bitcoin (BTC -7.52%) and other cryptocurrencies are soaring, but it's terrible in the aftermath of a market crash. 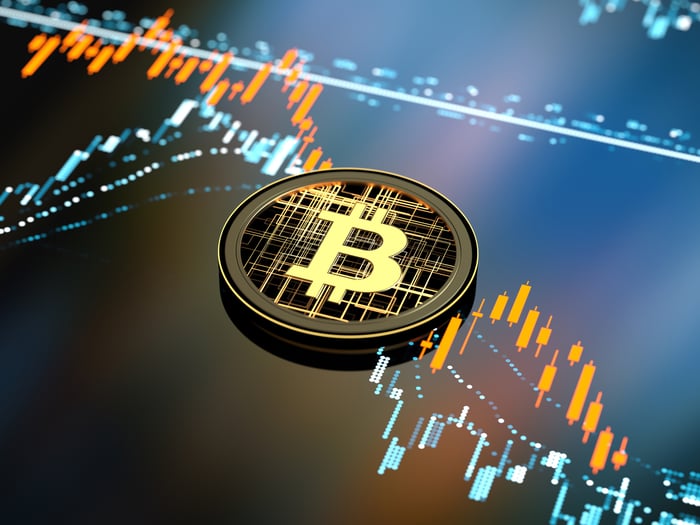 The bubble may be bursting

As I write this, Bitcoin is trading just above $35,000. That's down nearly 50% from its peak last month. Other cryptocurrencies aren't doing any better. The price of Ethereum has almost been cut in half, and Dogecoin is down even more. Things change fast, so these numbers could be outdated within minutes. But this is the biggest sell-off so far this year.

People trade anything -- stocks, cryptocurrencies, options -- because they think they can make money. Making money in cryptocurrency this year has been easy, at least until recently, because prices were going up fast. Ever-rising prices drew in more people, boosted Coinbase's user numbers, and drove record transaction volumes. Trading volume on Coinbase's platform rose by a factor of 11 in the first quarter on a year-over-year basis.

Coinbase recognizes that its business is unpredictable, so it doesn't provide any hard guidance. The company does provide a few scenarios related to monthly transacting users, but the most pessimistic one is still very optimistic.

If prices of cryptocurrencies continue to crash and don't recover anytime soon, why would all these people keep paying exorbitant fees to Coinbase to trade? Coinbase charges variable fees on top of fixed fees for all buy and sell transactions. It's not cheap to trade cryptocurrencies on Coinbase, but it didn't matter when users were expecting to make money fast. Take away the get-rich-quick aspect of cryptocurrencies, and the main draw for many people is gone.

The worst-case scenario for Coinbase is a massive and permanent drop in transacting users and trading volume far below the most pessimistic case laid out by the company. Coinbase will then have to compete for users, which means its fee structure will come under pressure. All of this could drive Coinbase's profits into the ground.

Coinbase has been around since 2012. The company has lived through multiple cryptocurrency crashes and has a ton of cash on the balance sheet. Coinbase will survive this crash. The question is: How much is the company really worth? Is it worth its current $45 billion market cap?

Like any cyclical company, valuing Coinbase on peak earnings is not a good idea. Coinbase expects to be breakeven, on average, for the time being, so the bad times are going to be quite bad. It has other irons in the fire beyond transaction fees -- the company offers lines of credit backed by Bitcoin, for example. But that business is also not going to do well if Bitcoin prices are falling off a cliff.

Is this the big crash that puts cryptocurrencies into a prolonged bear market? Or will prices recover just like they have each time they've slumped this year?

I have no idea. But what I know for sure is that I have absolutely no interest in Coinbase stock.