Please ensure Javascript is enabled for purposes of website accessibility
Log In Help Join The Motley Fool
Free Article Join Over 1 Million Premium Members And Get More In-Depth Stock Guidance and Research
By Nicholas Rossolillo - May 21, 2021 at 7:00AM

These companies are benefiting from a booming global video game industry, and they're growing fast.

Video games were already a growth industry, but the pandemic cemented gaming as a top entertainment choice among many consumers. And even as the effects of COVID-19 start to subside in some areas of the world, video games are proving durable.

This year's first-quarter earnings reports were an indication of this -- and with solid starts to the new year, Zynga (ZNGA), Sea (SE 0.15%), and Universal Display (OLED 3.55%) are video game stocks you should consider picking up. 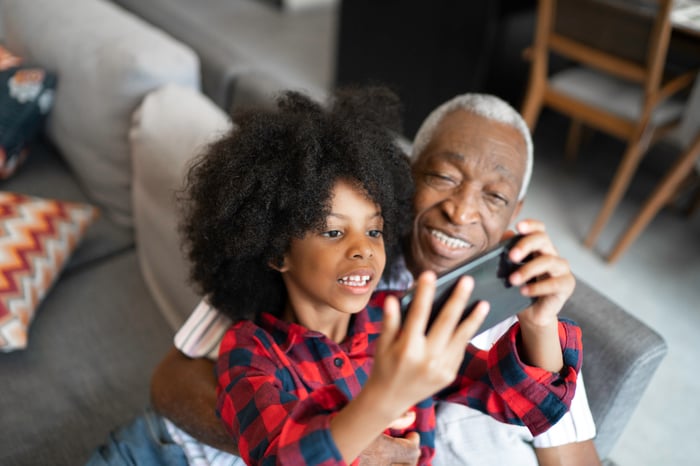 Mobile games are blasting the competition

Smartphones have made tens of millions more people into gamers. In fact, the smartphone is the top medium for playing video games these days. Smartphone games accounted for half of global revenue by some estimates last year and are expected to remain in pole position in 2021.

Zynga is a standout in this arena. The company is known for its franchise titles like CSR Racing and Words With Friends, as well as new names like Toon Blast and Toy Blast (which it acquired via the purchase of Peak last summer). And 2020 was a banner year for the company. Stuck at home with little to do, consumers turned to mobile games to burn their extra free time during lockdowns. Zynga had another exceptional showing in the first quarter as it lapped one last pre-pandemic period. Revenue was up 68% to $680 million, a new record, and adjusted EBITDA was up 81% to $123 million.

Individual player engagement has been high, but Zynga sees an opportunity to expand its advertising revenue, which worked out to 18% of total sales in the latest report. To that end, the company announced it's acquiring mobile ad platform Chartboost for $250 million in cash, expecting it to immediately contribute to profitability by the time the deal closes (expected in the third quarter of 2021). For reference, Zynga had $1.36 billion in cash and short-term equivalents on the books at the end of March.

Even without the addition of Chartboost, it's going to be a good year for Zynga. Management increased its full-year 2021 revenue guidance by $100 million and is now forecasting $2.7 billion, up 37% from 2020. Based on that guidance, Zynga stock trades for just four times expected sales. Based on free cash flow, this isn't the most profitable video game business around right now as it digests its recent acquisition spree -- free cash flow totaled just $282 million over the last 12 months. But the business should become more profitable in time as Zynga scales up its operations in the fast-growing mobile gaming and advertising space. This looks like a long-term value after the first-quarter update.

Sea was a white-hot e-commerce stock last year as southeast Asia took up online shopping en masse during the pandemic. The hype cooled off this year but not for any particularly good reason. E-commerce once again stole the spotlight in the first quarter with sales up 250% year over year to $922 million. But it's gaming that still pays the bills at Sea.

It might be a couple years old now, but the free-to-play battle royale hit Free Fire (published via Sea cloud-gaming subsidiary Garena) was again the top-grossing app in Southeast Asia, Latin America, and India in the first quarter of 2021 -- a record it's held since 2019 in Southeast Asia and Latin America. The result? Sea's "digital entertainment" segment grew 111% year over year to $781 million. And though this division is now smaller than e-commerce, it generated $717 million in adjusted EBITDA, offsetting a $413 million loss from the e-commerce segment.

At some point, I expect Sea to release a follow-up to Free Fire to keep its gaming platform relevant. When it does, it will have hundreds of millions of active players to market to, nearly 80 million of whom were already paying customers last quarter.

Sea's balance sheet is also in good shape as it continues to scale up its e-commerce efforts. Unrestricted cash, equivalents, and short-term investments totaled $6.06 billion (and another $244 million in long-term investments) at the end of March, offset by convertible debt of just $1.76 billion.

Its overall growth trajectory will likely cool off as it starts to lap the start of the pandemic from a year ago, but shares still look like a solid long-term investment right now. The stock trades for 23 times trailing 12-month sales, and adjusted EBITDA profit margin overall (4.9% over the past year) is still thin enough to not be very meaningful.

Nevertheless, this remains a top video game platform with a promising digital commerce business being built using the gaming profits. Given the lack of bottom-line return, this stock isn't for everyone. But for growth investors that can stomach some wild fluctuations, Sea is still a top pick.

This final pick isn't a video game stock per se. Universal Display is a licensor of ultra-high definition OLED display technology and sells basic materials used to manufacture them. To date, these top-of-the-line screens have been confined to high-end smartphones and premium TVs. But the price of OLED panel manufacturing continues to come down closer to that of legacy LCD screens. The largely untapped mid-market smartphone and TV niches are now within reach, as are the virtually untouched laptop and PC industries. Once the domain of early adopters, video game enthusiasts of all sorts may be able to afford OLED displays within the next few years.

This trend is keeping Universal Display's long-term growth story going. Revenue in the first quarter was up 19% to $134 million, driven by more material sales as OLED panel production ramps up. Profitability was up even more as Universal Display gets more efficient at larger scale. Net income increased 35% year over year to $52 million, good for an enviable net profit margin of 39%.

Universal Display is of course a growth stock -- and one that can be particularly volatile given that its sales to manufacturing customers can go through wild swings as global demand for displays ebbs and flows. But this is also a great income stock in the making. The company currently pays a dividend yielding just 0.4% (or $0.80 per share on an annual basis). However, the company has increased its payout every year since it initiated the dividend in 2017 (at which time the annual payout was just $0.12 per share).

For now, though, it's all about the growth trajectory. And with new devices adopting OLED and more laptops geared toward video games coming out soon, 2021 is set to be a good year for Universal Display. Management expects revenue to fall in the range of $530 million to $560 million, up 27% from 2020 at the midpoint of guidance. Given the even faster expansion of profits, shares look like a not-so-unreasonable 68 times trailing 12-month free cash flow. I remain a buyer of this top high-end display stock.