Please ensure Javascript is enabled for purposes of website accessibility
Log In Help Join The Motley Fool
Free Article Join Over 1 Million Premium Members And Get More In-Depth Stock Guidance and Research
By Demitri Kalogeropoulos - May 21, 2021 at 10:09AM

The rebound was stronger than the pandemic-driven sales collapse.

TJX Companies (TJX 1.37%) just posted one of its strongest quarters in recent memory. Sure, the off-price apparel specialist's year-over-year numbers sparkled compared to last year's period of lockdowns during the initial phases of the COVID-19 pandemic. Yet the business even sailed past its 2019 first-quarter result despite pressure from continued store closures.

Revenue more than doubled to $10.1 billion, compared to a year ago, when roughly 50% of TJX's Marshalls and T.J. Maxx stores were completely closed to customer traffic. To reduce some of the noise involved with that unusual comparison, management said comparable-store sales for locations that were open for the entire period rose 16%. 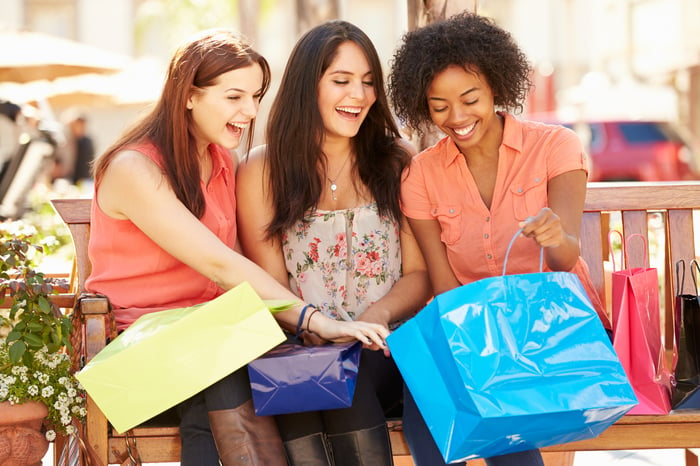 That result included a 12% spike for its U.S. apparel stores and a blazing 40% surge at HomeGoods, which sells mostly home furnishings. Overall, sales rose 9% compared to two years earlier, in the last pre-pandemic Q1.

"I am extremely pleased with our first quarter results," CEO Ernie Herrman said in a press release, citing sales and earnings that were "both well above our plan."

TJX fared better in markets like the U.S., which had relaxing COVID-19 restrictions. That success implies significant gains still to come as its store bases in Europe, Australia, and Canada get back to full capacity. Together, those segments are still running nearly 40% below 2019 sales rates.

The retailer is finding ways to satisfy varied demand, too. Its home furnishings business is surging as consumers prioritize home upgrades. And the apparel segment is rebounding, too, which management said is an indication that people are "beginning to resume more normal activities." TJX sees a good mix of inventory available to buy from full-price retailers, putting it in a good merchandising position for the summer selling season.

Executives say the good times continued early into the second quarter, with comps trending at a similarly blazing rate through the start of the quarter. But it's still too hard to project demand trends through the rest of the year. Through Q1, store closures in Europe and Canada removed about 14% of global selling capacity, management estimates. Its results over the next few months will depend on how quickly that figure moves toward 0%, as it has in the U.S. already. Today, TJX predicts global capacity will be down only 3% for the fiscal second quarter.

In the meantime, its finances have improved enough that the company is paying off another huge chunk of the debt it took on during the crisis phase of the pandemic. TJX is erasing $1.25 billion in bonds to push its total payback to $2.75 billion so far.

That's a strong sign that the retailer has moved beyond the COVID-19 crisis, which forced a surprise global sales shutdown. TJX can now reasonably target new annual sales records this fiscal year despite the drag from lingering closures. Consumers clearly want to shop again, and TJX has many of the apparel and home products that they're looking to buy.