Please ensure Javascript is enabled for purposes of website accessibility
Log In Help Join The Motley Fool
Free Article Join Over 1 Million Premium Members And Get More In-Depth Stock Guidance and Research
By Adria Cimino - Mar 2, 2021 at 8:45AM

This discount retailer is taking advantage of at least two key opportunities today.

TJX Companies (TJX -1.04%) has something in common with fellow retailers that rely on shoppers coming to their physical stores. The coronavirus pandemic has been a big drag on sales and profit. In some locations, stores remained shut for months. And everywhere, consumers generally favored contactless experiences. And that means online shopping versus browsing alongside other shoppers.

But amid the negatives, some positives emerged for the off-price retail giant. And TJX -- owner of the Marshalls, T.J. Maxx, and Homegoods chains -- even plans on expanding in the coming year and beyond. Investors remain optimistic. The shares gained almost 12% in value last year and are up about 2% so far this year. Now the question is whether you should add TJX to your stocks shopping list.

Let's take a closer look at the full picture. 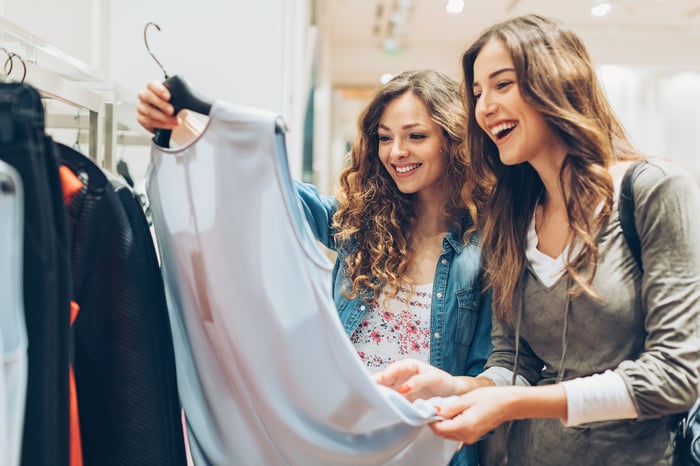 TJX has a long track record of success. The company has posted rather steady annual sales and profit gains over the past 30 years. Over time, the stock has climbed too. 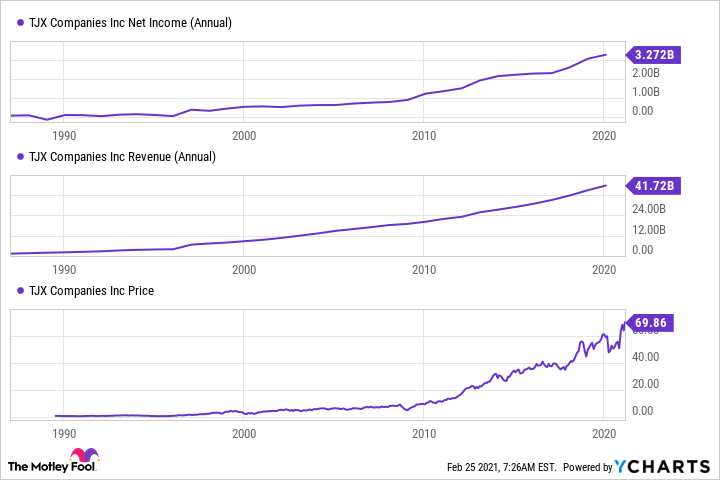 The pandemic marked a pause in that trajectory. In the fiscal 2021 fourth quarter (which ended Jan. 30, 2021), for example, some of the company's stores were closed for 13% of the period due to the coronavirus crisis. TJX reported earnings per share of 27 cents.

Closures in Europe and Canada translated into about $950 million to $1 billion in lost sales, according to TJX. The company estimates earnings per share would have been $0.18 to $0.21 cents higher if the stores hadn't been closed. TJX expects some stores to remain closed for 11% of the fiscal 2022 first quarter.

In brighter news, TJX is seeing progress in trends at stores that are open. In the quarter, sales fell only 3% year over year. That's after falling 5% in the previous quarter. CEO Ernie Herrman said in the earnings call that sales improved each month in the quarter. And they swung into positive territory in January.

But what's most encouraging are two points that should set TJX up for success when the crisis eases -- and into the future. First, TJX is taking advantage of the inventory opportunity. Some retailers have been forced to close permanently or are scaling down operations. That means vendors have an even wider selection of products to offer TJX's buyers. Last year, the company said it worked with "thousands" of new vendors.

Second, as other retailers close, TJX sees a real estate opportunity. The company said this means opportunities to move into target markets, relocating certain stores into better locations, and working to secure leases at better terms. In this fiscal year, TJX plans to open 122 new stores -- for a total of nearly 4,700 stores at year-end.

This shows TJX's confidence in its future. And I like the company's idea of growing in a strategic way, in areas where it is likely to find success -- and benefit from lease terms. Location is already a strength for TJX. Mall-based retailers have struggled as foot traffic declines in those locations. But TJX has benefited from its spot in small plazas near where people live and work.

TJX's liquidity is another reason to like this retailer. The company finished the quarter with more than $10 billion in cash, its highest level ever. 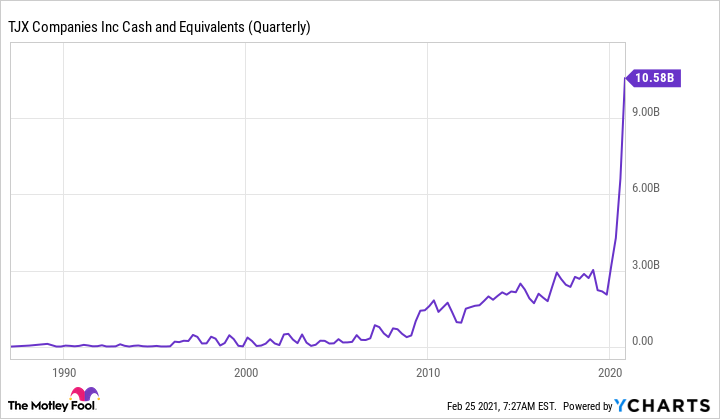 And at the same time, TJX reduced its borrowing costs. Through efforts such as the issuing of lower interest rate bonds, TJX cut interest rate expenses by $32 million annually.

Recovery will take a little time

The coronavirus pandemic still may hurt sales at TJX in the coming months. I don't expect a sudden dramatic recovery. But TJX has positioned itself for a return to its usual strength once the crisis eases. And that's why, for the long-term investor, this retail stock is a buy today.