Please ensure Javascript is enabled for purposes of website accessibility
Log In Help Join The Motley Fool
Free Article Join Over 1 Million Premium Members And Get More In-Depth Stock Guidance and Research
By Adam Levine-Weinberg - May 22, 2021 at 9:50AM

Yet as poorly as GE Aviation performed in 2020, the pandemic didn't hurt its long-term profit potential very much -- if at all. On Friday, the unit bagged another huge order for jet engines and services, highlighting its remarkable growth prospects.

The vast majority of GE's aviation segment relates to building and servicing aircraft engines. In 2019, the business generated $9 billion of its $32.9 billion of revenue from selling engines for commercial jets, with another $15.2 billion coming from commercial engine services.

GE's CFM joint venture has driven the bulk of the aviation unit's growth recently. CFM's LEAP engines power the Boeing 737 MAX and many Airbus (OTC: EADSY) A320neo-family aircraft. (They will also power the COMAC C919: a Chinese-built narrow-body jet that is currently scheduled to enter service by year-end.) 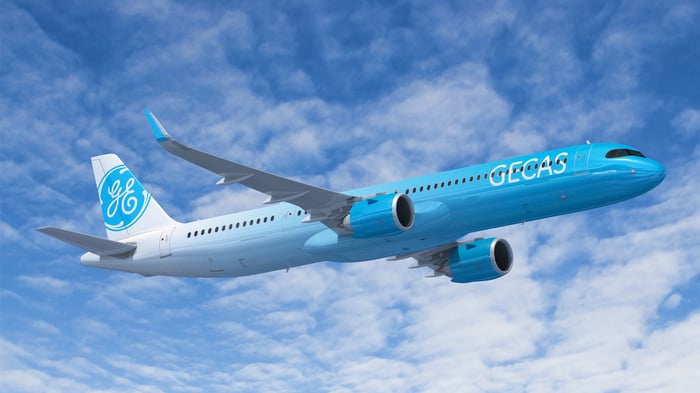 Whereas CFM has exclusivity on the 737 MAX and C919, Airbus A320neo-family operators can choose between CFM's LEAP-1A and the geared turbofan (GTF) engine offered by Raytheon's Pratt & Whitney unit. The battle for market share on the A320neo has gained importance for GE due to the 737 MAX grounding and the ongoing shift of the commercial jet market away from wide-body aircraft.

CFM gets another big win

On Friday, CFM and IndiGo -- India's largest airline -- announced that IndiGo had selected the LEAP-1A to power an additional 310 Airbus jets it has on order. The companies also signed a long-term service agreement for these engines. This represents CFM's largest order ever (by number of engines), sliding in ahead of a 2019 deal with IndiGo to power 280 A320neo-family jets.

That 2019 order marked a huge victory for CFM, as IndiGo had selected Pratt & Whitney's GTF for its first 140 A320neo-family deliveries. Reliability problems and elevated maintenance costs for the early GTF engines laid the foundation for CFM to win that business.

However, Pratt & Whitney has dramatically improved on both metrics in recent years. That helped it win an order from Frontier Airlines -- previously a CFM customer -- to power 134 Airbus A320neo-family jets earlier this year. IndiGo also considered returning to the GTF for its next engine order, before ultimately selecting the LEAP-1A again. With this week's win, CFM is set to power the vast majority of the jets ordered by Airbus' largest A320neo customer. 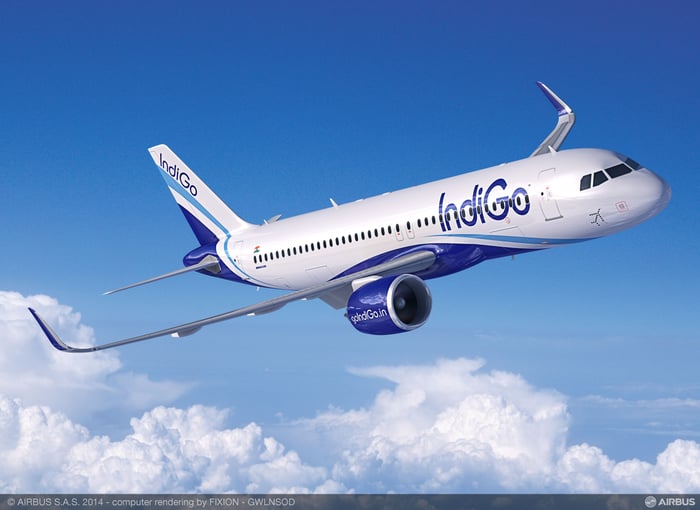 The new IndiGo deal likely encompasses nearly 700 engines, including spares. (For comparison, GE reported just 351 net orders for LEAP engines in 2020.) While CFM didn't publicize the contract value for this week's deal, it valued the somewhat smaller 2019 IndiGo order at more than $20 billion at list price.

GE Aviation's revenue continued to plummet in the first quarter of 2021, falling 28% year over year to $5 billion. However, steep cost cuts implemented last year enabled the segment to achieve a double-digit pretax margin. Segment profit fell 36% to $641 million. While that's hardly a good result, it represented a huge improvement over the unit's 2020 performance.

As the air travel recovery accelerates over the next year or two, GE Aviation's revenue and profit should recover toward 2019 levels. The segment will also benefit from growth in its military aviation business; management expects military revenue to reach $8.3 billion by 2025, up from $4.4 billion in 2019 and $4.6 billion last year.

Meanwhile, GE Aviation continues winning engine and services deals -- particularly at its CFM joint venture -- that will generate meaningful revenue and earnings well into the 2030s. Despite facing a big setback last year, GE Aviation is poised to return to its traditional status as General Electric's biggest cash cow and most important earnings growth driver within just a few years.