Please ensure Javascript is enabled for purposes of website accessibility
Log In Help Join The Motley Fool
Free Article Join Over 1 Million Premium Members And Get More In-Depth Stock Guidance and Research
By Adria Cimino - May 22, 2021 at 6:00AM

It's the perfect time to build up your portfolio.

If you have a big chunk of money to invest, you might be a bit hesitant about diving into the market right now. The S&P 500 lost 4% in just a few days earlier in the month. And the Nasdaq slid more than 6%. Both indexes have recovered some of those losses, but they're still struggling.

That doesn't mean you should stay out of the market. In fact, it's the perfect moment to invest. In some cases, you'll scoop up stocks at bargain prices. And as for stocks that haven't fallen much, you'll see they have the ability to hold up when times are tough. So, without further ado, let's take a look at how you might consider deploying $50,000 in the stock market right now. 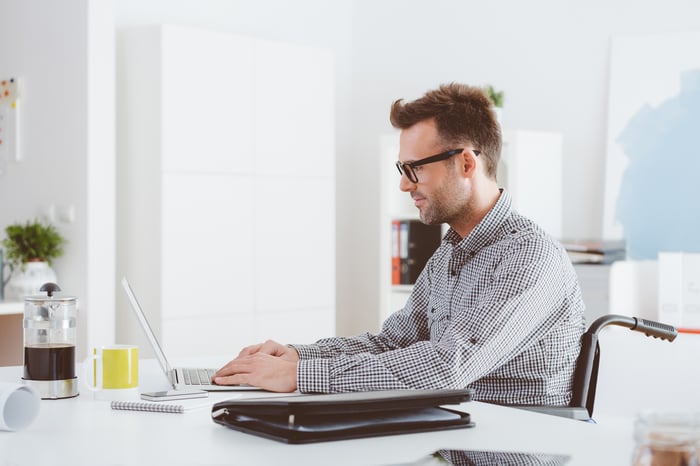 It's always a smart idea to include a few "safe haven" stocks in your portfolio. By this, I mean those that offer a track record of profit and earnings performance -- and might even pay an interesting dividend. Often, healthcare companies fit the bill. People usually can't forgo their products and services, so even during difficult times, we can count on revenue growth. I would invest about $15,000 in these shares.

Johnson & Johnson (JNJ 1.52%) is a great example. Both annual profit and revenue have grown over time -- and today, they top $14 billion and $82 billion, respectively. The big pharma company has demonstrated its ability to reward long-term investors: The stock has climbed 160% over the past decade. J&J also is a member of the dividend elite: It's a Dividend King, meaning it has raised its dividend for at least 50 consecutive years.

Abbott Laboratories (ABT 0.09%) is another solid choice. The company sells medical devices, diagnostics, nutrition products, and pharmaceuticals. Abbott is benefiting now -- and probably into the foreseeable future -- through the sales of its COVID-19 tests. They generated $2.2 billion in revenue in the most recent quarter. Like J&J, the company has increased profit and revenue over time. 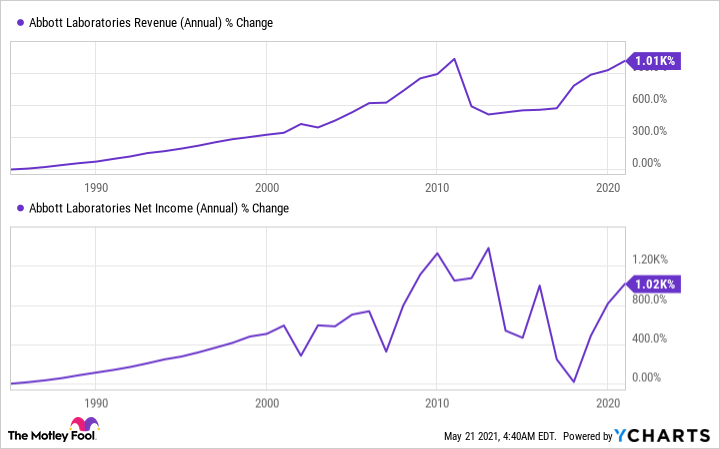 ABT Revenue (Annual) data by YCharts.

The stock has climbed more than 360% over the past 10 years. And it's lifted its dividend for more than 25 straight years, making it a Dividend Aristocrat.

Add growth to the mix

You can also include a couple of high-growth players in the mix if you're OK with a bit of risk. Moderna (MRNA -2.60%) is a biotech company with only one product on the market -- but it's a big one. Its coronavirus vaccine has already made the company profitable -- after just one full quarter of commercialization. Moderna's stock has climbed about 125% over the past year. But it doesn't seem expensive considering earnings; the stock trades at less than 7 times forward earnings estimates.

Your next step might be investment of about $15,000 in a basket of stocks that could benefit in a postpandemic world. Here, I'm thinking of entertainment giant Disney (DIS -2.06%) and cruise operator Carnival (CCL -5.55%) (CUK -6.00%). Disney recently reopened its California parks, and with the June reopening of Disneyland Paris, all Disney parks will be back in business. Carnival said this week that three of its cruise line brands will resume U.S. sailings in July.

Now, when I say you might think about adding Amazon (AMZN -2.86%) and Target (TGT -3.47%) to this basket, you might say: Wait a minute -- they both benefited during the pandemic. True. But experts expect the popularity of e-commerce to continue. Target and Amazon are proving that's likely with strong first-quarter earnings reports. The retailers grew sales nearly 23% and 44%, respectively.

Finally, I would take advantage of recent declines to invest about $10,000 in a fund or funds that have performed well over time. The one I'm thinking of right now is Ark Innovation ETF (ARKK -5.92%). The extra bonus is that it's led by star investor Cathie Wood. The Ark Innovation Fund has climbed more than 480% over the past five years. That's versus a 183% gain for the Nasdaq. Since the start of the month, Ark Innovation has slipped about 11%.

What to do with the remaining money in your investment budget? Even if there are many opportunities to buy, I still would set aside $5,000 to $10,000 as an opportunity fund. I would use this cash in the coming weeks or months to add to previous positions or pick up shares of another company that wasn't on my radar earlier.

Of course, you don't have to have $50,000 to follow this plan. You can scale it down (or up) depending on your budget. And you can also adjust according to your comfort with risk. That's a key factor when building a portfolio.

So if you're a long-term investor, there are plenty of smart investment choices out there in this market downturn. And that will be the case even if the market crashes.