Please ensure Javascript is enabled for purposes of website accessibility
Log In Help Join The Motley Fool
Free Article Join Over 1 Million Premium Members And Get More In-Depth Stock Guidance and Research
By Daniel Foelber, Scott Levine, and Lee Samaha - May 23, 2021 at 5:00AM

These pure-play and integrated robotics companies come from a variety of industries.

While the S&P 500 remains within striking distance of an all-time high, tech stocks and cryptocurrency names are plummeting all around us. Robotics stocks are caught somewhat in the middle -- depending on where you look. That's because robotics isn't its own sector, but rather an emerging technology that's gaining traction across a wide variety of industries.

With that, we asked some of our contributors which companies stood out as leaders in the robotics space. They chose ABB (ABB -1.91%), Intuitive Surgical (ISRG -2.10%), and AeroVironment (AVAV -1.35%). 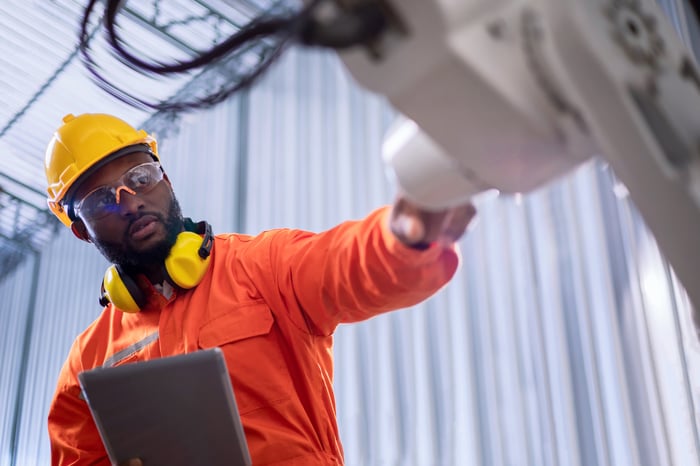 Lee Samaha (ABB): The European industrial giant (it has a U.S. listing) operates in some desirable markets. Not only is it one of the largest robotics companies in the world, but it's also a leading player in the adjacent markets of process automation, motion control, and electrification products.

That's all well and good, but the problem has been one of serial underperformance over the last decade compared to its peers. In fact, earnings per share declined by an annual rate of 6% from 2009-2019. Clearly, management wasn't extracting the best it could out of ABB's portfolio of businesses.

Step forward new CEO Bjorn Rosengren in February 2020. Under Rosengren, ABB has finally ditched its matrix business structure (individuals report to several different leaders rather than an immediate superior) in favor of a more conventional organizational structure. Significant cost reduction programs have been put in place with $500 million in annual net savings achieved in 2020, one year ahead of plan. Management plans for another $300 million in corporate cost savings.

Rosengren is also taking action to trim non-core businesses. ABB plans to exit its power conversion, mechanical power transmission, and turbocharging businesses (together around 6% of revenue) and is considering a stock market listing for its electric vehicle charging business.

It's all intended to expand profit margins to those achieved by its peers while refocusing on growth areas like robotics. As such, analysts have ABB growing operating profit to $4.5 billion in 2023 from just $1.6 billion in 2020. If Rosengren gets there, there's a lot of upside potential for the stock.

Robotics in the healthcare industry

Daniel Foelber (Intuitive Surgical): From industrial automation in factories and manufacturing plants to advanced intelligence in military satellites and surveillance, robotics plays an ever-growing role in the economy. But in the healthcare industry, the idea of robots operating on patients can freak people out.

The term "robotics" is a bit of a misnomer to describe industry-leading healthcare robotics giant, Intuitive Surgical. Its da Vinci surgical system isn't automated, but rather, gives the surgeon access to tools and instruments to perform minimally invasive surgery. These procedures use as few incisions as possible and can therefore be less harmful and lead to faster recovery times.

Despite gaining market share and exceeding a $100 billion valuation in late April, the company actually suffered a pretty severe revenue and profit decline during the second quarter of 2020. The COVID-19 pandemic overwhelmed hospitals, forcing many folks to delay surgeries. Facing less demand, many hospitals slashed their budgets, which directly impacted Intuitive Surgical's business. 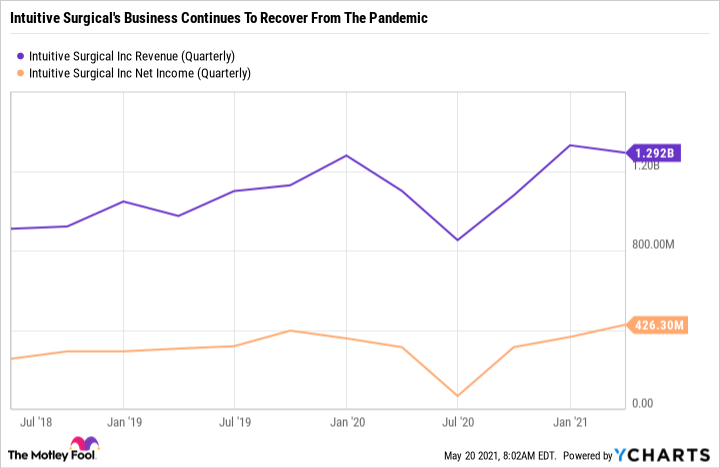 As the economy reopens, Intuitive Surgical is seeing its business improve dramatically. Its first-quarter net income came in at a record high. What's more, the company reinstated its financial guidance, aiming for between 22% to 26% higher total da Vinci procedures in 2021 than in 2020. The company notched just 1% higher procedures in 2020 than in 2019. It would have been a decline if not for a strong rebound in the fourth quarter. It also expects its 2021 gross profit margin to be between 70% and 71%, which is around what it was in 2019.

Intuitive Surgical isn't necessarily a cheap stock. However, its business looks to be back on track and could even achieve record-high results in 2021. For investors looking for exposure to robotics in the healthcare industry, Intuitive Surgical is a candidate to build your portfolio around.

A robotics stock to drone on about

Scott Levine (AeroVironment): Informing the public on the broad diversity of apps on its App Store, Apple created the tag line "There's an app for that" back in 2009. More than a decade later, it feels like we're moving to a point where we can substitute the word "robot" for "app." Want to vacuum while lying on the couch and watching Netflix? There's a robot for that. Want to order a pizza without relying on a driver to deliver it on time? There's a robot for that. And like the explosion in the number of apps available to smartphone users over the last 10 years, the number of situations where we'll rely on robots is sure to grow considerably in the future.

While robots may become more visible around our houses, another area where their presence has grown considerably is above battlefields. The U.S. military has become increasingly dependent on the tactical advantages that unmanned aerial systems (drones) afford, and one company that is leading the way in providing these solutions is AeroVironment. In fact, the company is the leading provider of small drones to the Department of Defense. It's not only Uncle Sam who relies on AeroVironment; America's allies also depend on the company for its drone technology. Over the past three years, for example, AeroVironment reported that international allies accounted for about 48% of annual revenue.

AeroVironment may be closely identified with air-based solutions, but thanks to a recent acquisition, its presence will also be felt on the ground. Earlier this month, the company completed its acquisition of Telerob, which will now be a wholly owned subsidiary of AeroVironment. A manufacturer of unmanned ground vehicles -- a market that some experts expect to grow at a compound annual growth rate of 15% from 2019 through 2026 -- Telerob further diversifies AeroVironment's global footprint as the company includes 45 countries in its customer base. According to AeroVironment, the acquisition will be profitable on a GAAP basis in the next two years.

Besides AeroVironment's emergence as a leader in drone technology, the stock's inexpensive valuation makes it an especially compelling option for robotics-focused investors right now. Shares of AeroVironment are changing hands at about 29 times operating cash flow, representing a steep discount to its five-year average multiple of 92.