Please ensure Javascript is enabled for purposes of website accessibility
Log In Help Join The Motley Fool
Free Article Join Over 1 Million Premium Members And Get More In-Depth Stock Guidance and Research
By Will Healy - May 25, 2021 at 5:45AM

Although Disney (DIS -0.63%) and Carnival Cruise Lines (CCL -3.08%) compete directly in the cruise business, both entertainment companies have seen dramatic revenue drops as COVID-19 restrictions shuttered part or all of their companies. At first glance, Disney's more diverse asset base left it better able to manage such a crisis. However, Carnival could conceivably serve investors better as it makes a comeback from losing nearly all of its revenue. Let's take a closer look to see how the leisure stocks compare. 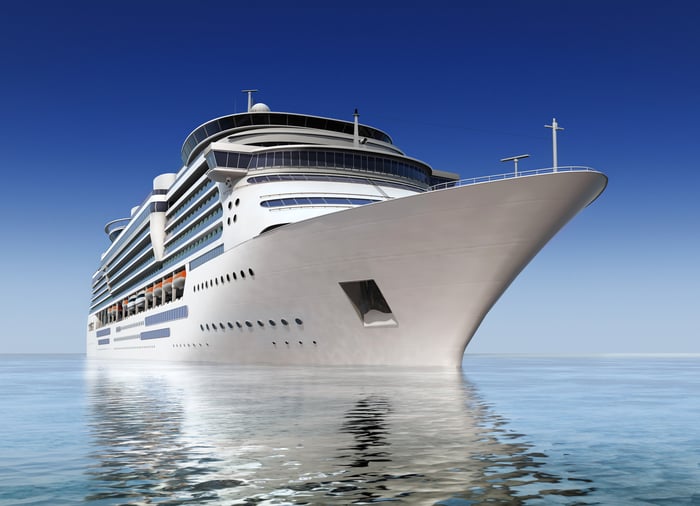 Weighing up the two companies

Carnival is the largest pure play in the cruise industry by market cap. However, with Carnival and its peers barred from sailing, quarterly revenue levels have sunk by more than 99% compared to pre-pandemic levels.

In comparison, Disney Cruise Lines accounted for only $1.6 billion, or just over 2%, of the company's $69.6 billion in revenue earned in fiscal 2019. Hence, the industry shutdown did not affect Disney as profoundly as it did Carnival.

Still, the cruise business was not the only part of Disney's parks, experiences, and products division affected by shutdowns. The pandemic also forced the closure of Disney's theme parks. This caused that division, which once accounted for nearly 40% of the company's revenue, to experience dramatic declines. At the pandemic's peak in Disney's third quarter of 2020, divisional revenue fell 85% from year-ago levels. Even with these venues getting back to normal, revenue for parks, experiences, and products remains below pre-pandemic levels.

Moreover, since Disney and its competitors have offered few new movie releases, the media and entertainment-distribution business has also suffered. ESPN also saw revenues plummet amid the cancellation of sporting events in 2020.

Fortunately, most of its content library remained available for viewing. Thus, the tripling of subscriptions to Disney+ and the double-digit subscriber increases for ESPN+ and Hulu mitigated some of the company's revenue declines. Due to this growth, the direct-to-consumer segment of its media & entertainment distribution division increased its quarterly revenue by 59%.

The advantage of Disney's diversification  shows up in the numbers. With its primary source of revenue cut off, Carnival earned only $26 million in revenue compared with $4.8 billion in the year-ago quarter. Although it cut operating expenses by 72%, its remaining fixed costs and rising interest expenses led to a loss of nearly $2 billion for the quarter.

Interest costs rose significantly as debt increased from around $9.7 billion to just over $26.5 billion. The company borrowed to cover its remaining costs, but the debt has strained Carnival's balance sheet since stockholders' equity now stands at just $19.8 billion. Stockholders' equity describes a company's value after subtracting liabilities from assets.

Conversely, Disney's shutdowns had less effect on its numbers. Quarterly revenue of $15.6 billion represents a 13% drop from year-ago levels. Nonetheless, quarterly net income nearly doubled during that period to $901 million. Other income, equity in the income of investees, and lower income taxes account for most of the increase.

Moreover, Disney generated $623 million in cash flow during the most recent quarter. That represents a drop of two-thirds from year-ago levels. However, it has kept the company afloat as large parts of the business shut down. It has also allowed Disney to reduce borrowings by nearly $2.5 billion without issuing a significant number of shares. Disney currently holds about $56.1 billion in debt versus $89.8 billion in stockholders' equity.

Stock performance offers a mixed picture. Interestingly, Carnival grew by approximately 90% over the last 12 months versus around 45% for Disney. However, when comparing from the beginning of January 2020, Carnival has lost close to half of its value. Disney performed better, reporting a return of just under 20% during the same period. 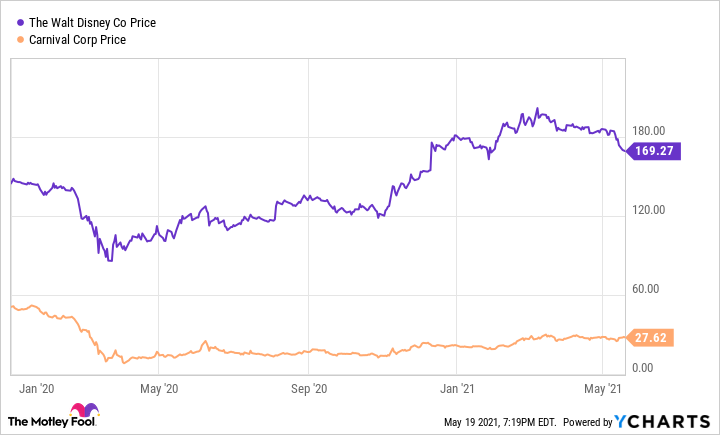 Carnival also achieved this growth despite difficulties in measuring its valuation. With negligible revenues, earnings and sales multiples offer little in determining its value. However, when measuring by book value, or the value of its stockholders' equity, Carnival trades at about 1.7 times book value. This comes in well below Disney's price-to-book value ratio of around 3.6. Still, while this makes Carnival significantly cheaper, a lack of significant revenue could dampen Carnival's appeal for stockholders.

Despite the higher valuation, Disney looks like the safer choice for prospective buyers. The drop in COVID-19 infections could put Carnival on the comeback trail starting in July. Still, paying off the massive debts accumulated from the prolonged shutdowns will probably take years.

Conversely, Disney stock has risen in large part on the success of its streaming services. This could mean investors have also priced in the benefit of a full reopening. Nonetheless, considering Disney's more diverse revenue streams and healthier balance sheet, it will probably serve investors better over time.