Please ensure Javascript is enabled for purposes of website accessibility
Log In Help Join The Motley Fool
Free Article Join Over 1 Million Premium Members And Get More In-Depth Stock Guidance and Research
By Brian Stoffel - May 25, 2021 at 5:45AM

And why that reason helps me not worry about volatility.

I have very little insight into how cryptocurrencies work. I get the gist, but I can't really explain how "the blockchain" functions -- and I think the same is true for most of us mortal investors. And I believe there's at least a 50/50 chance that an investment in something like Bitcoin (BTC 0.33%) or Ethereum (ETH 0.35%) will eventually end in major losses of whatever I put in.

And yet, for the past three years, I've held bitcoin in my portfolio. At one point it was the quickest 10-bagger I've ever had. But the ride up and the much more recent ride down haven't notably affected my emotions one bit. My daily life is largely unaffected by the swings of cryptocurrencies.

The key to my own crypto-zen: understanding that I hold bitcoin in the first place as an insurance policy against an unknown future.

It's actually easier to understand than you might think. 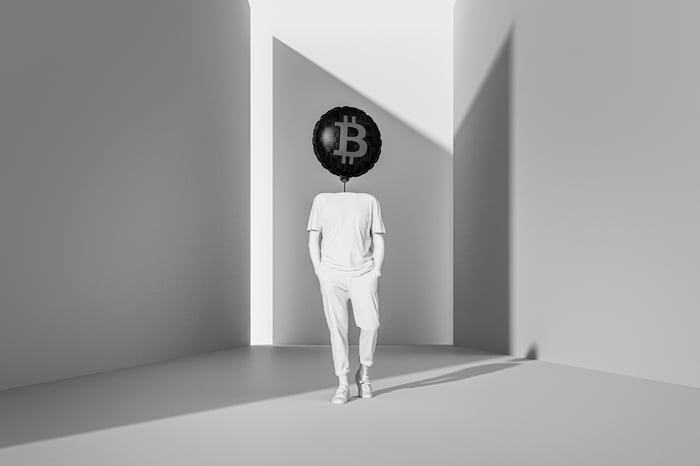 There's only one big advantage

But before getting to that insurance policy, it's important to investigate what makes cryptocurrencies such a revolutionary idea.

Perhaps the most interesting and easy to digest piece I've come across on this topic is a since-deleted open letter to JPMorgan Chase CEO Jamie Dimon from entrepreneur and investor Adam Ludwin.

Ludwin zeros in on the most important aspect of crypto since the original white paper by Satoshi Nakamoto: decentralization. By taking third-parties (read: banks and governments) out of the equations, everyday people can more freely spend their resources...or so the argument goes.

But Ludwin is brutally honest about everything a cryptocurrency like bitcoin is -- and isn't.

On almost every dimension, decentralized services are worse than their centralized counterparts:

They are more expensive

They are less scalable

They have worse user experiences

They have volatile and uncertain governance

And no, this isn't just because they are new. This won't fundamentally change ... there are structural trade-offs that result directly from the primary design goal of these services, beneath which all other goals must be subordinated in order for them to be relevant: decentralization.

Ludwin's letter is over three years old. Time has largely proven him correct.

So why on earth would someone ever invest in a cryptocurrency? As Ludwin puts it:

Access to decentralized applications is open and unfettered. Transactions on these services are unstoppable. More concretely, nothing can stop me from sending Bitcoin to anyone I please.

The Chinese government might have something to say about that, but time will tell how enforceable even that is.

Regardless of the response of authorities, this brings me to my next point: Under what circumstances would I really want to have bitcoin as a currency in the real world?

The answer: a kind of world that's a lot more chaotic and scary than the one I live in now. What might that look like? You could rattle off a few easy ideas: civil war, a nuclear disaster, or aliens landing in the middle of New York City.

I'll admit that the relative stability of fiat currencies amid the first pandemic in over a century reinforces that it would take a very high level of chaos to bring bitcoin to ascendancy. But then again, that's ok. In fact, it's great -- I don't particularly want my kids to grow up in a world beset by war, radiation and UFOs.

But -- and this is something we all underestimate -- the future is totally unknowable. And I'm not going to let a failure of imagination on my part stop me from making an investment that can act as insurance. That's why over three years ago I bought shares of Grayscale Bitcoin Trust (GBTC 0.26%). It's far from a perfect investment, but it works for me.

Mindset is all that matters

When I made my investment, I put 1% of my real-life holdings into it. I am fully prepared to see that investment go to zero -- gleeful, in fact, if it means we avoid a darker future. But if something happens that necessitates bitcoin, I believe this could offer a ballast for my family in times of chaos.

But here's the real key: Between November 2018 and this February, my purchase appreciated in value by almost 1,100%. That 1% of my portfolio quickly grew to almost 5%. I briefly thought about selling some, but realized that would ruin my mindset.

This is an insurance policy. Treating it like an investment now would make it impossible to continue treating it like an insurance policy in the future. My solution: I no longer even mentally count the investment as part of my retirement portfolio (even though that's where it is). Because of that, I don't have cortisol running through my veins when the price of bitcoin drops.

Anything more than that is unnecessary.