Please ensure Javascript is enabled for purposes of website accessibility
Log In Help Join The Motley Fool
Free Article Join Over 1 Million Premium Members And Get More In-Depth Stock Guidance and Research
By Keith Speights - Updated May 26, 2021 at 4:00PM

Two of them even have connections to the popular cryptocurrency.

It's been a rough month or so for Bitcoin (BTC -2.83%). After skyrocketing to an all-time high in mid-April, the popular cryptocurrency is now down by close to 40%.

The decline was even worse until Tesla CEO Elon Musk tweeted on Monday that he had spoken with U.S.-based Bitcoin miners who committed to publishing their current and planned renewable energy usage. Musk is viewed as having helped trigger the cryptocurrency's plunge in May after he tweeted that Tesla was suspending all purchases of its vehicles using Bitcoin because of the high energy requirements for its mining and transactions -- electricity that is largely generated by the burning of fossil fuels.

These gyrations have undoubtedly frustrated many fans of the cryptocurrency. What should they do? One option is to invest elsewhere. Here are three stocks to buy if you've got the Bitcoin blues. 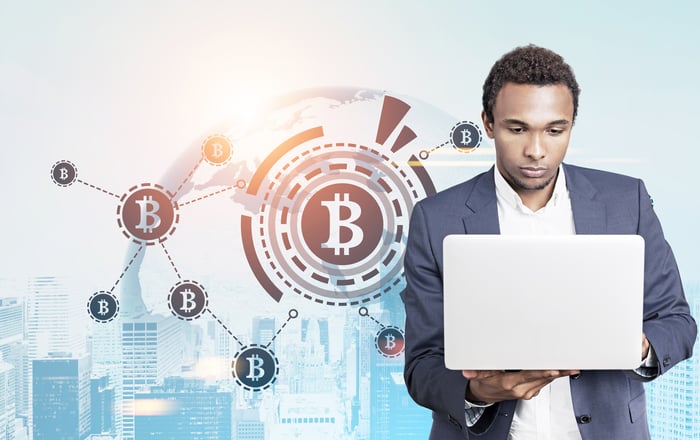 Square (SQ -0.76%) stands out as a company that directly benefits from Bitcoin, but it has a clear pathway to growth regardless of what happens with the cryptocurrency. The company's Cash App supports buying and selling Bitcoin, a feature that added more than $3.5 billion in revenues for Square in the first quarter. However, Square's profits weren't boosted nearly as much by its Bitcoin-related business because the company's profit margins from cryptocurrency transactions are quite thin.

There are plenty of reasons other than its Bitcoin support to consider investing in Square. For example, the company continues to expand its seller ecosystem. It started out focusing primarily on credit card processing, but has built out its platform with a range of products and services that make it sticky for merchants.

Square's expansion efforts were highlighted earlier this week in a Bloomberg article that reported the company plans to introduce business checking and savings accounts. This would be another step into traditional banking services -- a big market opportunity for the company.

Cash App, though, remains Square's biggest growth driver. Use of the Cash Card debit card linked to the app has skyrocketed. Square is also finding ways to integrate its Cash App and seller ecosystems.

Digital payments are destined to grow regardless of what happens with Bitcoin, and Square is one of the companies that's best-positioned to profit from this trend.

Back in the gold rush days, it was often said that those who sold picks and shovels made more money than the gold miners did. In today's world of Bitcoin mining, NVIDIA (NVDA 2.39%) ranks as a top provider of "picks and shovels." Its graphics processing units (GPUs) are among the best on the market for powering Bitcoin mining rigs.

NVIDIA can't track exactly how many of its GPUs are being used for crypto mining. However, analysts estimated that between $100 million and $300 million worth of them were purchased for that purpose in its fiscal 2021 fourth quarter (which ended Jan. 31) -- accounting for between 2% and 6% of the company's total revenue.

Most of NVIDIA's GPUs are used in gaming and in data centers, and those markets are providing most of its revenue growth. That momentum seems likely to continue as the popularity of gaming keeps increasing, and the use of artificial intelligence in more apps is driving demand for powerful servers higher.

NVIDIA's share price is about to decline sharply -- but for a good reason. The company plans to conduct a four-for-one stock split in July. This move will give it a share price that's more accessible to retail investors, and just might provide a catalyst to a stock that has already delivered a solid year-to-date gain.

DermTech (DMTK -1.00%) has absolutely nothing to do with any cryptocurrency. So why should investors with the Bitcoin blues take a look at this specific healthcare stock? Well, DermTech is currently trading even further off of its peak than Bitcoin is. The stock also has a crystal-clear growth opportunity, while Bitcoin's growth prospects are a lot murkier.

DermTech focuses on skin genomics. The company's Pigmented Lesion Assay (PLA) product is used to diagnose melanoma. For its test, an adhesive patch is placed on the patient's skin, then removed and sent to DermTech's lab, where genomic testing is performed on the skin cells attached to it to determine if melanoma is present.

You'd probably expect that this approach would be more appealing to patients than being cut by a dermatologist to obtain a biopsy. It's also more accurate and cheaper. PLA is 17 times less likely to miss a melanoma diagnosis than the standard surgical biopsy approach. And it's roughly 24% less expensive per lesion tested.

DermTech is still only in its early stages of growth. However, the company has secured reimbursement deals from several major payers, notably including Medicare. It's also developing genomics tests that target other types of skin cancer. For investors looking for a big rebound opportunity, DermTech could be an even better bet than Bitcoin.