Please ensure Javascript is enabled for purposes of website accessibility
Log In Help Join The Motley Fool
Free Article Join Over 1 Million Premium Members And Get More In-Depth Stock Guidance and Research
By Rich Smith - May 26, 2021 at 1:53PM

For GM, this is a back-to-the-future moment.

That might not seem like a surprising observation about Lockheed, whose Orion space capsule has long been an integral part of NASA's Project Artemis to send Americans back to the moon. But General Motors is a name no one has associated with space exploration since way back in the 1970s, when the automotive giant helped NASA build the original moon rover. 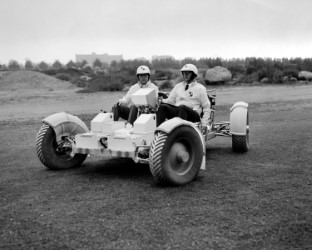 As the two companies announced this morning, Lockheed and GM are now teaming up "to develop the next generation of lunar vehicles to transport astronauts on the surface of the moon." Dubbed the Lunar Terrain Vehicle (LTV), the companies say that it will "enable astronauts to explore the lunar surface farther than ever before."

"Unlike the Apollo rovers that only traveled 4.7 miles (7.6 kilometers) from the landing site," the companies said, "the next-generation lunar vehicles are being designed to traverse significantly farther distances to support the first excursions of the Moon's south pole, where it is cold and dark with more rugged terrain." Future iterations will even feature "autonomous, self-driving systems" to allow operators on Earth to use rovers on the moon "to prepare for human landings," among other purposes.

Lockheed Martin will take the lead on this project, the announcement said, "leveraging its more than 50-year history of working with NASA on deep-space human and robotic spacecraft." GM will play a supporting role, building on its experience from developing the Apollo Lunar Roving Vehicle (LRV), and contributing modern battery-electric technologies and propulsion systems as well as autonomous technology that it has been developing to power self-driving electric cars.