Please ensure Javascript is enabled for purposes of website accessibility
Log In Help Join The Motley Fool
Free Article Join Over 1 Million Premium Members And Get More In-Depth Stock Guidance and Research
By Rich Smith - Oct 13, 2019 at 7:13AM

The contract could eventually double in value -- or go higher.

With a core stage built by Boeing, engines from Aerojet Rocketdyne, and rocket boosters from Northrop Grumman, NASA's Space Launch System (SLS) project will go down as one of the space agency's most complex and ambitious endeavors -- and one of its most expensive.

The SLS has cost more than $17 billion already -- and it's not done yet. Even after it is complete, the SLS is expected to cost in excess of $1 billion per launch -- and that's without the cost of the Lockheed Martin (LMT 0.33%) Orion space capsule, which the SLS will carry on its missions.

Just last month, we got our latest update on NASA's plans for the SLS and Orion, once they're ready to fly. 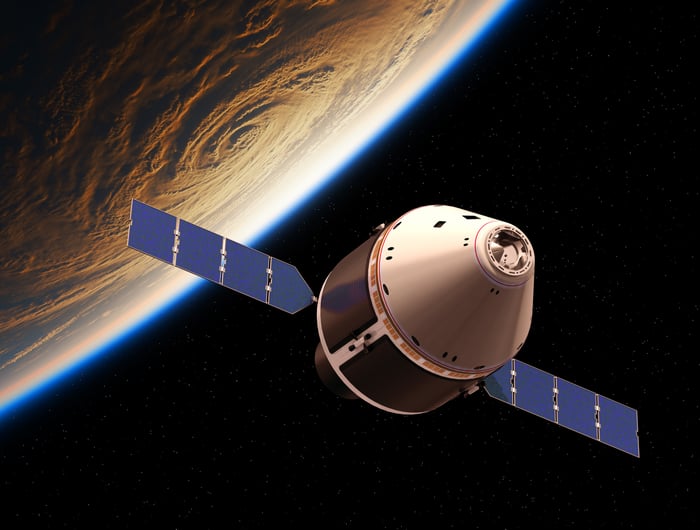 In an award valued at an initial $2.7 billion, NASA has announced that Lockheed Martin will build at least three Orion spacecraft for use in its Artemis program to return astronauts to the moon by 2024. Under a previous contract, Lockheed is building the first two Orion capsules to fly on the first two SLS missions, one a flight past the moon (Artemis I) and back without a crew, and the second (Artemis II) for a similar mission, with a crew on board.

Once those missions are completed, NASA plans to attack its real objective: getting back onto the moon.

The three Orion spacecraft meant to accomplish this (delivering components to the Lunar Gateway orbital space station) will be part of Artemis missions III, IV, and V, and will cost approximately $900 million each. As production ramps up, NASA anticipates buying three more Orions from Lockheed (for Artemis missions VI through VIII) at a total cost of $1.9 billion -- about $633 million per spaceship.

As the agency explains, "Ordering the spacecraft in groups of three allows NASA to benefit from efficiencies that become available in the supply chain over time -- efficiencies that optimize production and lower costs." Hopefully for Lockheed, those efficiencies won't cut too deeply into the 17.9% operating profit margin that it earns from its space division. Although technically a defense stock, according to data from S&P Global Market Intelligence, space is actually Lockheed's most profitable business unit by far.

Speaking of which, the $4.6 billion that Lockheed Martin will collect in exchange for building these half-dozen Orions should generate in excess of $820 million in operating profit -- assuming profit margins remain intact. And that's only the beginning.

As NASA noted in its press release, "the Orion spacecraft production line [could] support as many as 12 Artemis missions" over time, potentially doubling the amount of profit that Lockheed is in line to receive. And because the designation "Artemis" refers specifically to NASA's moon program, there's also the possibility that further missions using the Orion could follow -- missions to Mars, to the asteroid belt, and beyond.

Admittedly, this is a possibility, not a certainty. The Orion Production and Operations Contract (OPOC) that NASA awarded to Lockheed last month does cap its ambit at a maximum of 12 Orion spacecraft dedicated to the moon program through Sept. 30, 2030. But this doesn't preclude the expansion of SLS-Orion production in 2031 and beyond.

In a nod to the new fashion of building reusable spacecraft, pioneered by its rival SpaceX, Lockheed Martin has designed Orion to be at least minimally reusable, with plans to recover each capsule and relaunch it at least once. Such an initiative, if it proves feasible, could cut into Lockheed's potential production revenue and profits.

Or perhaps not. NASA's ideas on "reusability," as it turns out, are somewhat in flux.

The agency noted that Artemis II, for example, will be reused only to the extent of removing computers and other high-value electronics, crew seats, and switch panels and reinstalling them into the Orion capsule that will become Artemis V. Conversely, the plan is to take Artemis III and reuse the entire capsule, redesignating it Artemis VI -- which helps explain the cost reduction for capsules VI through VIII. At least one of these Orions that Lockheed will build won't be built new at all, but reconditioned.

Of course, if Lockheed can convince NASA to pay it $633 million to reuse a spacecraft that cost $900 million to build new, it's also possible that the aerospace company could convince the space agency that new Orion prices should stay high as well. That could preserve Lockheed's rich space division profits for years to come.