Please ensure Javascript is enabled for purposes of website accessibility
Log In Help Join The Motley Fool
Free Article Join Over 1 Million Premium Members And Get More In-Depth Stock Guidance and Research
By Jennifer Saibil - May 27, 2021 at 8:00AM

The vacation rental company is new to the markets. Here are five facts worth knowing before you invest.

Airbnb (ABNB 2.48%) went public during one of its worst years on record, and it was still the biggest initial public offering (IPO) of 2020, debuting at $68 per share for a $47 billion valuation. Trading at 21 times sales, shares are expensive. But don't write it off just because of that; there's also a great growth story. Here are five things you didn't know about the vacation rental platform.

1. It's easy to get started

One of the ways Airbnb has transformed the travel industry is that it has made it easy for anyone with an extra bed to become a travel entrepreneur. That's why more than 4 million hosts have signed on with the platform, including many hosts who own several rentals. That's important for a few reasons. One, the hosts' success is the company's success, so Airbnb is invested in providing a good experience for hosts. Two, the company provides a platform, but doesn't need to invest in costly construction. And what I think is most important, the sky is the limit (literally). The company can grow as large as the amount of hosts who sign on, all without a lot of extra overhead. 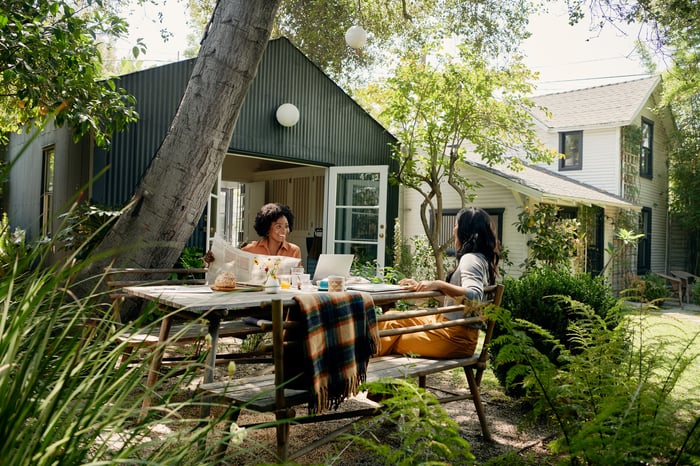 Of first-quarter new listings, 50% received a booking within four days of listing, and 75% received one within 12 days. New listings convert, and that's good for all parties.

2. The majority of hosts are women

Fifty-five percent of hosts, and 58% of Superhosts, are women. That became important during the pandemic as women disproportionately lost jobs, and since it's relatively easy to become an Airbnb host, Airbnb is helping women create successful careers. Between March 11, 2020 and March 11, 2021, the average first-time host with one listing made $8,000.

3. There are untapped growth streams

One of the most interesting tidbits in the first-quarter report is that Airbnb rentals are proving to be more than a place to vacation -- people are using them as longer-term residences. About a quarter of bookings (before cancellations and changes) were for long-term stays, which are 28 days or more. That was up from 14% in 2019; 50% of bookings were for seven days or more.

That's a huge growth opportunity, and one that hasn't been been truly explored yet.

4. Its business is more resilient than you think

The company completely recovered in the first quarter of 2021, with sales increasing from the 2019 numbers. Gross booking volume decreased, but average daily rates increased. That means it can still increase sales in challenging environments, and it bodes well for the company's potential when travel rates resume a growth trajectory.

Airbnb's model, which makes travel easier and cheaper, should also benefit from the trend of working from home.

Some of the better-performing categories in the first quarter were domestic travel and less densely populated areas. When travel was difficult, people still chose to travel, just in different ways. Airbnb easily filled those demands with its large and diverse assortment of rentals.

In the first quarter, active listings grew 30% in non-urban areas. If new listings can sprout up in areas where there's demand, and Airbnb can find and recruit hosts to meet demand as it changes, that's an amazing advantage that Airbnb has over traditional travel companies, which can't build new hotels as easily.

5. It posted a huge loss in the first quarter

For all its fantastic performance in the first quarter, its loss widened to more than $1 billion. That included $782 billion that the company said wasn't related to day-to-day operations.

Airbnb announced a huge upgrade plan to its hosting program on Monday, with over 100 modifications. Those include features such as more flexible planning options and an arrival guide for customers with all of the information they need for their stays. It remains to be seen how these changes will affect bookings and sales, but it could be huge. At the very least, it demonstrates that the company values progress and will take the necessary steps to move out of its comfort zone and grow, and that's an attribute of a company you want to watch.