Please ensure Javascript is enabled for purposes of website accessibility
Log In Help Join The Motley Fool
Free Article Join Over 1 Million Premium Members And Get More In-Depth Stock Guidance and Research
By Billy Duberstein - May 27, 2021 at 6:51AM

It has a similar yield, but a much better growth outlook.

Last week, AT&T (T -0.38%) announced it would be spinning off its WarnerMedia unit and cutting its dividend. While these actions were probably the right moves for the company, there wasn't much joy from shareholders, as the stock sank on the news.

Many AT&T shareholders are retirees who likely held the stock for its high dividend, but the new AT&T dividend should only be a little more than half the current payout, likely just under 4% at the stock's current levels.

While the new media company could have promise, AT&T's "core" telecom business is up against some stiff competition in the race for 5G. AT&T is currently behind in that race, based on the roadmaps laid out by rivals Verizon (NYSE: VZ), which now has a higher dividend, and T-Mobile (TMUS -0.44%), which doesn't have a dividend, but does have a clear lead in 5G deployment. That's probably why AT&T cut its dividend, in addition to offloading some $43 billion in debt to the new media company.

But what if I were to tell you there's a way to get exposure to a well-positioned telecom that's currently leading the 5G race, but which also pays out a 3.4% dividend -- not much below that of the "new" AT&T? 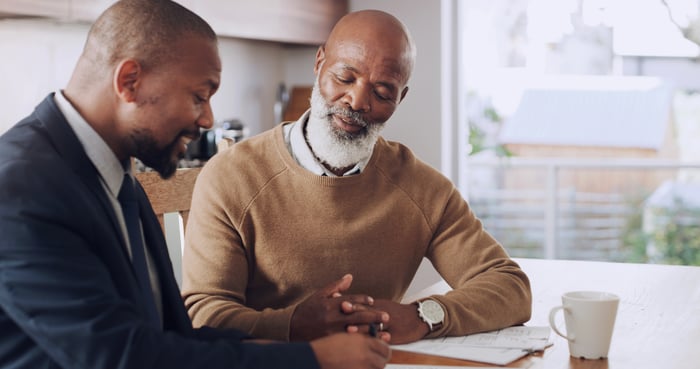 Looking across the pond to Europe, Germany-based Deutsche Telekom (DTEGY -0.47%) is not only posting strong results, but also looks quite undervalued to boot, based on the sum of its parts.

Deutsche Telekom's most valuable segment is its 43.2% stake in T-Mobile. As I've written about recently, T-Mobile has a clear two-year lead in mid-band 5G deployment, and its management is highly confident it will retain that network advantage for the duration of the 5G era. That's great news for the ascendant T-Mobile, and bad news for the incumbents that used to have superior networks in the 4G era: AT&T and Verizon. Deutsche Telekom's proportional stake in T-Mobile is worth about $73.7 billion, or about 60.1 billon euros.

Deutsche Telekom's entire market capitalization is about 81 billion euros, so one could say its European operations, which include wireless services, fiber broadband, and cable in Germany and several other European countries, are currently valued at less than 21 billion euros, give or take. Deutsche management expects its non-T-Mobile businesses to generate around 11.2 billion euros in adjusted EBITDA this year, up in the low single-digits, so investors can get the entire European business for less than two times EBITDA. Yes, the European operations do have a significant 40 billion or so euros in debt (ex-T-Mobile), but the company still has investment-grade credit ratings.

A cheap way to play T-Mobile, and with a dividend nearly as high as AT&T's

T-Mobile is actually one of my largest holdings, in contrast to the tiny token position in AT&T I still retain, basically as a cash substitute (and it may not be in the portfolio for long). T-Mobile seems incredibly well positioned to lead the 5G era and grow at a much stronger pace than the industry over the next five to 10 years. After all, look how it's performed relative to Verizon and AT&T over the past five years, even with Verizon and AT&T's hefty dividends included: 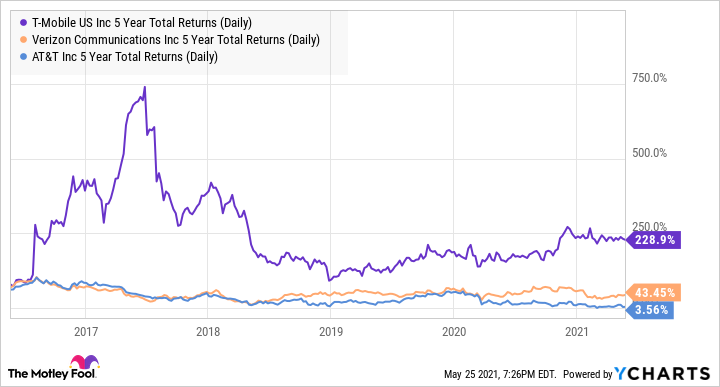 However, I'm also not especially concerned with receiving dividends at this stage of my life, so I'm perfectly fine holding the dividend-free T-Mobile directly. But for older investors who need safe and reliable income, and who often look to reliable telecoms as the backbone of their portfolios, investing in Deutsche Telekom gives you the benefit of investing in T-Mobile, along with the ability to collect a dividend only slightly lower than that of Verizon or the "new" AT&T.

So for those now worried about the future of their AT&T investment in the 5G era, Deutsche Telekom may be the better option.