Please ensure Javascript is enabled for purposes of website accessibility
Log In Help Join The Motley Fool
Free Article Join Over 1 Million Premium Members And Get More In-Depth Stock Guidance and Research
By Trevor Jennewine - May 27, 2021 at 7:52AM

Cathie Wood is the founder and CEO of ARK Invest. In the past couple of years, she's gained a reputation as one of Wall Street's best stock pickers. As evidence, the performance of ARK Innovation ETF (ARKK 4.19%) her company manages has crushed the S&P 500 index over the last five years, surging 490% while the broader market gained 105%.

Notably, ARK is heavily invested in Tesla (TSLA 4.67%). In fact, the electric vehicle (EV) maker is the firm's largest holding, and it represents 10% of the ARK Innovation ETF. Given Cathie Wood's reputation, investors should take her position seriously.

So, is Tesla stock a buy?

By the end of last year, 10 million electric cars were on the road worldwide, up significantly from 17,000 in 2010. That soaring popularity has been driven by several factors: improvements in battery technology, declining costs, government-backed purchase subsidies, and a growing interest in reduced carbon emissions. 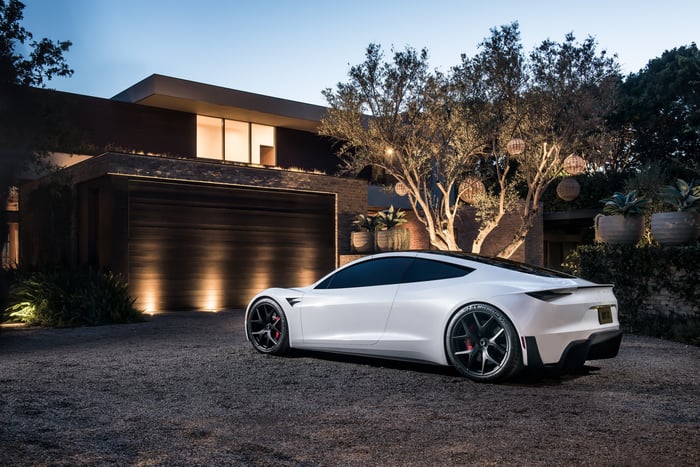 More importantly, that trend is expected to continue. According to Allied Market Research, the global EV market will grow nearly 23% per year through 2027, reaching $803 billion. And Tesla is at the forefront of that trend.

As of March 2021, the company had a 16% EV market share, while the next closest competitor had just 9%. That puts Tesla in a good position -- but it's not the full story.

Since October 2016, all Tesla vehicles have shipped with the latest autopilot hardware. And with well over 1 million vehicles on the road, Tesla has access to far more real-world driving data than any of its rivals. In fact, its fleet had logged over 3 billion miles on autopilot as of February 2020. That gives Tesla a significant advantage in the race to build a fully autonomous vehicle.

Currently, Tesla manufacturers vehicles at the Fremont Factory in California and the Gigafactory Shanghai in China. The company believes these two facilities have a combined capacity of 1.05 million vehicles per year. Even so, Tesla produced only 509,737 vehicles in 2020, roughly half of its estimated capacity.

However, Tesla achieved record production and deliveries in the first quarter of 2021, boosting those figures 76% and 109%, respectively. To add, the Model 3 became the best-selling premium sedan in the world, surpassing BMW's 3 Series.

Tesla's top-line performance has been strong in recent years, and its bottom line is improving, though the majority of Q1 net income still came from the sale of Bitcoin and regulatory credits.

That's good news for investors. According to Grand View Research, total EV units will grow at 42% per year through 2027. If Tesla can outpace the growth of the overall industry, it will gain market share in the years ahead.

Tesla stock has a market cap of $575 billion. For perspective, that means the company is worth more than Toyota, Volkswagen, Daimler, and General Motors combined. But that wasn't always the case. Just 12 months ago, Tesla's market cap was $150 billion -- in other words, its value has surged 280% in the last year.

Not surprisingly, Tesla stock looks quite pricey. In fact, at 18 times sales and 597 times earnings, it's an understatement to say it trades at a premium valuation. The vast majority of automakers don't come close to those multiples. So investors have to ask themselves an important question -- can Tesla can justify that price over the long term?

Personally, I own Tesla and I have no plans to sell. I think this EV maker could change the world in ways that most companies only dream of. That being said, there's no denying its absurd valuation. Wall Street clearly has high expectations for Tesla.

So here's my advice: If you like Tesla's long-term prospects and want to buy the stock, buy in small slices. Don't sink your life savings into Tesla, and don't buy your entire position at once. Tesla's share price has dropped 30% from its 52-week high, but that doesn't mean it can't keep falling.