Please ensure Javascript is enabled for purposes of website accessibility
Log In Help Join The Motley Fool
Free Article Join Over 1 Million Premium Members And Get More In-Depth Stock Guidance and Research
By Chad Henage - May 27, 2021 at 7:30AM

"Investing" in dog-based crypto may be all the rage, but will investors be left holding the bag?

When a Japanese kindergarten teacher posted photos of her Shiba Inu dog, Kabosu, in 2010, no one knew this dog -- or "doge," as one fateful internet user called her -- would spawn billions of dollars in meme-inspired cryptocurrency. Eleven years later, Shiba-Inu inspired crypto coins are running wild. Investors buying meme-based coins are probably imagining becoming overnight crypto millionaires. Unfortunately, just because early Dogecoin buyers may have done well doesn't mean every joke coin will be a winner. There is a much more stable and potentially lucrative way to profit from cryptocurrency that's far less likely to leave investors chasing their tails.

Not a joke anymore

The Doge meme spawned Dogecoin (DOGE -0.17%) in 2013. The Dogecoin website describes the crypto as a "fun and friendly Internet currency." 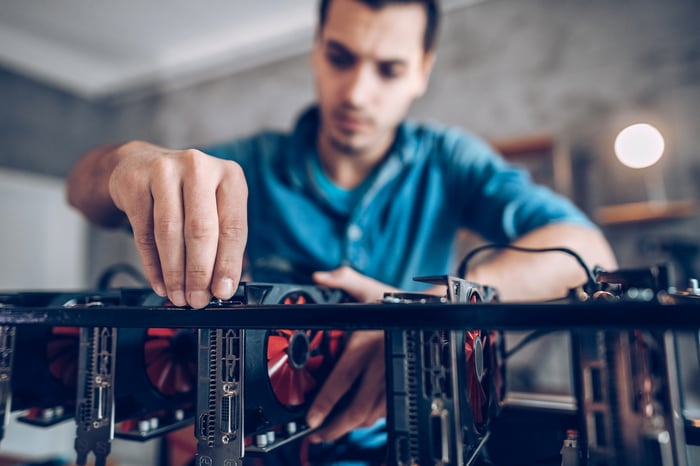 The original point of Dogecoin might have been to just have fun, but for investors, having fun means making money. And the COVID-19 pandemic seems to have changed crypto's growth curve. As laid-off people sought ways to make quick money, they increasingly turned to trading cryptocurrency. In March of 2020, Chinese search engine Baidu (BIDU -1.03%) reported searches for bitcoin increased 183% over the prior year. Later in 2020, as bitcoin rose to a three-year high near $17,000, the crypto market started to really catch fire. Many people worldwide were still dealing with the economic challenges of COVID-19, and discount brokerage firms and crypto exchanges helped them trade crypto in record volumes.

The beginning of 2021 changed many things for Dogecoin and crypto in general. Dogecoin increased roughly eightfold in the first five weeks of the new year. The coin took a breather until about mid-April, when the price jumped again to a new high of $0.40. Just a few weeks later, the coin breached its highest point, exceeding $0.70. To put this into perspective, an investment of just $100 in Dogecoin on Jan. 1 at $0.005 per coin would have been worth more than $14,000 by the high point in May.

This get-rich-quick scenario seems to give insight into why some are willing to buy coins worth a fraction of a cent. The New York Times suggests that years of low interest rates, massive student loans, and housing price inflation are causing some investors to take what it calls the "trampoline" approach to investing. Instead of a steady growth approach with a diversified portfolio, they're looking for a moonshot investment that will change their financial future. At worst, they'll only land back where they were before. Investors who feel like they missed the move in Dogecoin may now be enamored with the next great meme-coin.

Unwilling to let one dog rule the yard, the Shiba Token (CRYPTO: SHIB) was introduced as, "an experiment in decentralized spontaneous community building." In other words, Shiba was created to see whether a community could support a token with no technological advantage over other coins.

Another dog nipping at Dogecoin's heels is the Kishu Inu (CRYPTO: KISHU) token. This meme coin's main differentiating factor is the promise of instant rewards. "Each time a buy or sell is completed, 2% of the transaction is ditributed to existing holders." If we look closely at Dogecoin, Shiba, and Kishu, there are similarities that should worry most investors.

Simple economics suggests that the larger the supply, the lower the price. This helps explain why Bitcoin (BTC -3.15%) is still worth around $39,000 per coin, even after a massive correction. There will never be more than approximately 21 million bitcoins. Bitcoin is thought of as the gold of the cryptocurrency world. Using this same theory, you might start to understand why Shiba Tokens and other joke coins are widely referred to as ... um ... we can't print it here, but it's a far more scatological rhyming version of "bitcoins."<--

Though Dogecoin gets a lot of press, it doesn't exist to solve a problem. For investors looking for a pure play in the crypto space, there are likely better options than chasing a bunch of dogs.

Growth and income from Ethereum

During the California gold rush, you could either mine for gold and hope to strike it rich, or be the one selling picks and shovels. Think of Ethereum (ETH -3.98%) as the shovel that the doggie-meme coins need to find their fortune. Both the Shiba Token, and the Kishi Inu Token, run on the Ethereum blockchain. In this way, ETH could be a long-term beneficiary of all this dog inspired "investing."

One point of clarity: ETH is the actual token you buy. Ethereum is the blockchain that runs the different apps and services. Every time you send ETH, or use an application on the Ethereum network, you pay a small fee. This fee is incentive to a miner (a record keeper) to check and make sure no one is cheating.

The Ethereum blockchain is also attempting to address one of the concerns about bitcoin: the power it consumes. Bitcoin and other cryptocurrencies, including Etherium, currently run and secure their networks by asking ultra-powerful computer chips to crunch difficult mathematical calculations, using massive amounts of energy in the process. While some of that energy comes from renewable sources, Bitcoin miners also often draw on air-polluting fossil fuels like coal and natural gas to feed their hunger for electricity.

ETH 2.0 offers a potential solution to this power usage, by changing how the Ethereum blockchain works. Instead of requiring raw computing power to process transactions and mine new coins, ETH 2.0 will ask users to "stake" some portion of their existing crypto holdings to help verify that its network is running correctly. The more of their holdings they stake to help the network stay secure, the more the network rewards them with interest payments. Instead of treating cryptocurrencies as assets that will appreciate in value, like stocks, ETH 2.0's staking solution could transform them into income-producing investments, more like bonds, dividend stocks, or savings accounts.

For income investors, crypto might not even make their radar, but ETH 2.0 could change that quickly. Atomic Wallet, which makes one of the most popular ways for users to store crypto coins, expectats an APR of somewhere in the 4% to 10% annual range for staking ETH. In fact, Coinbase Global (COIN 5.34%) already offers a 6% APR on any amount of ETH staked with no minimum requirement. Admittedly, there are other cryptocurrencies that allow staking, but ETH 2.0 is the first time the second largest crypto by market cap will have this option embedded into its network.

Third and most importantly, Ethereum is being used every day to solve real world problems. If you need to send money to anyone with an Ethereum wallet, the transfer takes mere minutes. If you want to borrow, lend, or conduct transactions with certain conditions, Ethereum does that too.

Ethereum is a cryptocurrency investment with a long-term value proposition. With the move to ETH 2.0. growth and income investors have a new option to consider -- and unlike the pack of dog coins, it's no joke. ETH has already seen close to $9 billion staked for the benefit of ETH 2.0 upgrades. Investors can easily track this staking progress: The larger the staking pool, the more secure the upgraded network will be. The Ethereum network publicly explains its planned upgrades, and investors can track these expansions each step of the way. As long as ETH 2.0 follows its current roadmap, growth and income investors might have a front-row seat to watch a real moonshot take place in their portfolios.

Why Now Is a Good Time to Buy Ethereum