Please ensure Javascript is enabled for purposes of website accessibility
Log In Help Join The Motley Fool
Free Article Join Over 1 Million Premium Members And Get More In-Depth Stock Guidance and Research
By John Rosevear - May 27, 2021 at 10:10AM

Ford on Wednesday addressed a number of analysts' concerns about its plans to transition to zero-emission, connected vehicles. In a series of presentations by senior executives, the company said that it will spend at least $30 billion by 2025 as it prepares to mass-produce its own batteries and launch EVs built on two new architectures.

Wall Street liked what it heard. RBC Capital analyst Joseph Spak upgraded Ford to outperform, from sector perform, and raised his firm's price target to $17 from $13. Spak wrote that he now has more confidence in Ford's financial targets, that he believes Ford has definitively addressed auto investors' concerns about its EV strategy, and that its stock is still trading somewhat below its historical valuation. 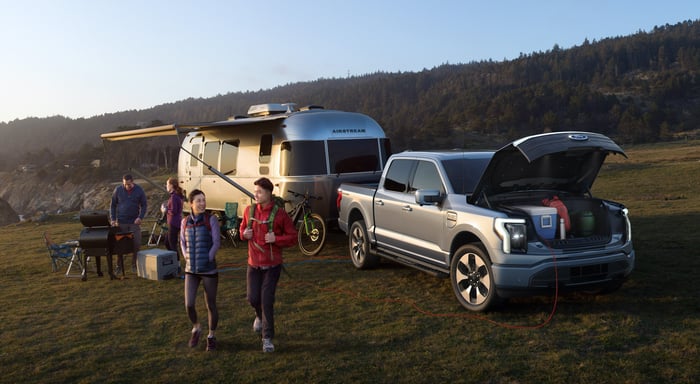 Ford made clear on Wednesday that its impressive electric F-150 Lightning is just the beginning of a $30 billion EV push. Image source: Ford Motor Company.

At Deutsche Bank, analyst Emmanuel Rosner raised its price target on Ford to $16 from $14 while maintaining a hold rating. Rosner said that Ford confirmed that it's on track for profit growth over the next couple of years and that it argued credibly that it will make a successful transition to the "smart" EV era.

Ford's prospects over the next few years look bright, but its second-quarter results may well be grim. The company warned last month that an ongoing shortage of semiconductors could cost it half of its second-quarter production -- a warning that CFO John Lawler pointedly declined to take back during a question-and-answer session after yesterday's presentation.

We'll have a better idea how Ford is doing after it reports its May U.S. sales next week.