Please ensure Javascript is enabled for purposes of website accessibility
Log In Help Join The Motley Fool
Free Article Join Over 1 Million Premium Members And Get More In-Depth Stock Guidance and Research
By Matthew DiLallo - Updated May 28, 2021 at 5:15PM

The diversified infrastructure company has more visible growth ahead.

Kinder Morgan's (KMI -0.64%) growth days appear to be in the rearview mirror. The energy infrastructure giant's cash flow from operations has declined in recent years due to the impact of asset sales, volatile commodity prices, and the roll-off of existing contracts. Meanwhile, it doesn't have much growth coming down the pipeline, given its dwindling expansion project backlog.

Because of that, it's not the best option for investors seeking growth in the infrastructure sector. Instead, a much better alternative is diversified global infrastructure operator Brookfield Infrastructure (BIP -0.65%) (BIPC -0.15%). Here's why. 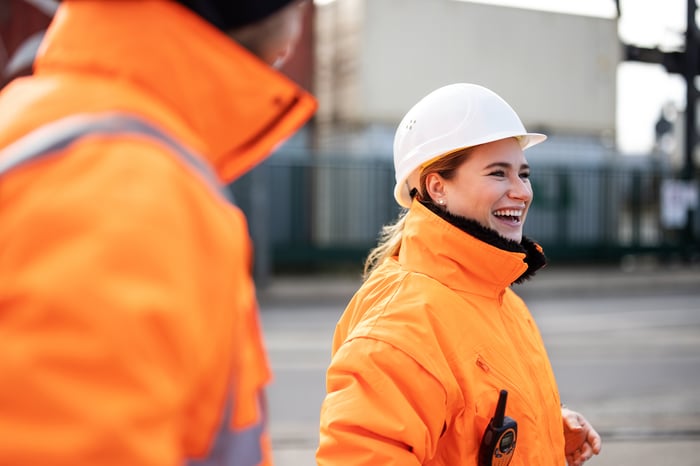 Kinder Morgan currently has $1.4 billion of expansion projects in its backlog. It intends to invest about 60% of that capital in natural gas infrastructure projects.

However, while it has a high return hurdle rate new for projects, these investments won't move the needle that much over the next few years. That's because the company continues to face headwinds from expiring legacy contracts, volatile commodity prices, and declining volumes. As a result, the company likely won't organically grow its distributable cash flow per share by much in the coming years.

On the other hand, Brookfield Infrastructure expects a trio of catalysts to drive 6% to 9% annual growth in its funds from operations (FFO) per share over the next few years. These include:

That embedded organic growth should give Brookfield the fuel to increase its dividend by 5% to 9% per year for the foreseeable future. While Kinder Morgan will also likely grow its dividend over the coming years, the primary fuel will be a higher payout ratio, not rising cash flow.

Brookfield also expects to continue making value-enhancing acquisitions. The company estimates that it can boost its FFO per share by an incremental 1% to 5% per year through its capital recycling program. That strategy sees it sell mature assets and use the cash to acquire businesses with higher return potential.

For example, over the past year, the company has sold its North American district energy business, its U.K. smart meter assets, and an interest in a natural gas pipeline business it co-owns with Kinder Morgan. These transactions generated more than $1.75 billion in cash. That's given it the financial flexibility to make deals it believes will grow its FFO at a faster pace in the future.

For example, it recently closed the purchase of a telecom tower portfolio in India, a stake in a liquified natural gas export facility in the U.S., and the remaining interest in a Brazilian natural gas pipeline transmission system. Meanwhile, it's attempting a $5 billion hostile takeover attempt of Canadian oil infrastructure company Inter Pipeline (IPL). It sees many other potential opportunities ahead for additional transactions, including in data infrastructure, purchasing additional energy midstream assets, and helping recapitalize the transport sector.

For example, the company has previously noted that utilities are beginning to unload their gas infrastructure assets to help finance their transition to renewable energy. This move could open the door to more acquisition opportunities for the company in the future. However, unlike Brookfield, Kinder Morgan doesn't have a well-defined acquisition-growth strategy. As a result, it's unclear how much future deals could move the needle for the company.

While Kinder Morgan's energy infrastructure assets generate lots of stable cash flow each year, the company hasn't been able to increase the rate in recent years. Given the headwinds facing its business, it might not be able to jump-start its growth engine unless it starts making acquisitions.

Contrast that with Brookfield Infrastructure's highly visible organic growth program, which it intends to continue complementing via a steady diet of value-enhancing acquisitions. Because its cash flow should continue growing in the coming years, Brookfield could produce higher total returns. That makes it the better option over Kinder Morgan for investors seeking an infrastructure-focused growth stock.