Please ensure Javascript is enabled for purposes of website accessibility
Log In Help Join The Motley Fool
Free Article Join Over 1 Million Premium Members And Get More In-Depth Stock Guidance and Research
By Alex Carchidi - May 28, 2021 at 6:20AM

It's the right time to be decisive, if you can tolerate uncertainty.

Buying a stock means taking a chance that you'll lose money, so that your money will have a chance to grow. Thankfully, it's not possible to lose more money than it costs to buy the shares in the first place, though it is possible to make far more than your initial investment. So, by seeding your portfolio with a few high-risk and high-reward stocks, you're increasing the chances of finding a disproportionately large winner that will make up for your losses.

Pre-product biotech stocks are excellent options for this kind of controlled speculation. In that vein, let's investigate Surface Oncology (SURF 4.32%), which doesn't have any products on the market, nor does it have the prospect of consistent revenue on the horizon. So, how could it be a great stock to buy? Like many small biotechs, it's a company that could be worth ten times as much in 2031 compared to now, and that makes it worth paying attention to. 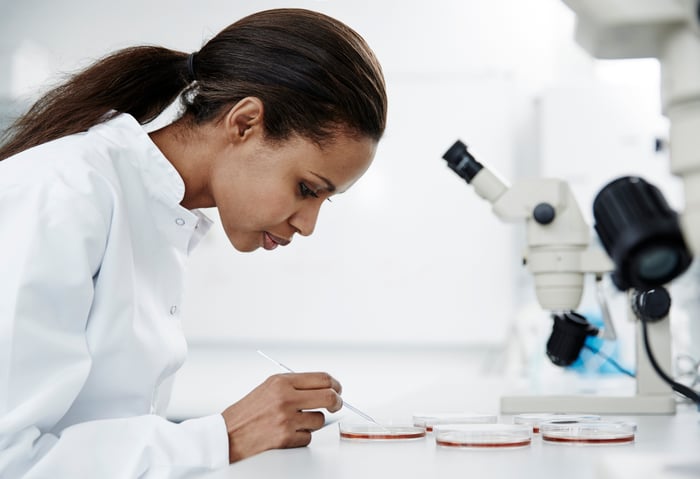 At the moment, the best argument in favor of buying Surface Oncology is that its ducks are in a row for the next couple of years of drug development, clearing the way for its stock to grow alongside a steady drip of new data.

As of April 1, Surface has a new CEO, Dr. Robert Ross, who was formerly the company's chief medical officer (CMO). More importantly, in late March the U.S. Food and Drug Administration (FDA) granted an orphan drug designation to SF617, which is intended to treat pancreatic cancer. Surface owns the full rights to SF617, meaning that it will get the full benefits of the designation's package of additional allowances and intellectual property protections if the drug makes it through the clinical trial process.

The biotech has also made a powerful friend as a result of its collaboration with Merck. In the collaboration, Merck's first-line oncology drug, Keytruda, will be investigated in a phase 1 clinical trial in conjunction with Surface's SRF388. Liver cancer and kidney cancer are the intended targets, and investors will get an update on the program's progress in early June, at the American Society of Clinical Oncology's 2021 annual meeting. Grabbing a collaborator like Merck is critical for early stage biotechs like Surface because it gives them access to cash, clinical trial expertise, and other resources that they wouldn't otherwise have. So, it bodes well for the company's future, especially if Merck decides to work with it on future projects.

Financially, Surface is in good condition, though it has no recurring revenue as of yet. Its $175 million in cash is more than enough for it to continue with research and development (R&D) work through 2023.

Getting in early means getting a bargain

When it comes to nascent biotechs like Surface, investing early can be a winning strategy. Though there's not much information to go on while evaluating the stock, there's plenty of time for that to come out over the next few years. Buying now ensures that investors will get the full benefit of the headline-driven bumps to the stock price as the clinical trial process unfolds. And, for those who are willing to hold for the longest, it's also possible to get a massive gain in the event that the company succeeds in commercializing one of its drugs.

Alternative strategies, like waiting until a biotech has demonstrated favorable results in the clinic before buying, can also work. But it's important to remember that in the world of biotech, waiting for more information doesn't always reduce the amount of risk. Let's take a moment and investigate the merits of waiting a while for a company like Surface Oncology to mature its clinical programs before investing.

Oncology is a particularly tricky area of drug development. Roughly two out of three oncology projects fail in phase 2. Waiting to invest until after a company has reported its phase 2 results means paying more for the stock, as the market prices in the project's new level of confirmed advancement. Waiting doesn't guarantee any additional safety or higher returns, however. Of the oncology projects that survived phase 2, roughly two thirds will then go on to fail in phase 3. Only 3.4% of candidates survive the entire clinical trial process to reach approval.

So, why not just wait until after phase 3 results are confirmed to invest, then? That's certainly a valid strategy, but the main problem with it is that favorable phase 3 results tend to send biotech stocks skyrocketing in anticipation of commercialization. As a result, investing late in the process means that buyers will miss out on the price appreciation stemming from clinical trial updates and a building sense of realistic future revenue. Earnings reports could still buoy the price, but the massive growth potential for shareholders is typically in the rearview mirror, at least until new projects can make it through the pipeline.

In short, Surface Oncology is a stock that's best bought sooner rather than later. It's a speculative purchase, and investors should be clear-eyed about the company's chances of success with any individual program. Still, in the context of a properly diversified portfolio, holding a few companies like Surface is key to long-term growth, and that's why it's worth some serious consideration.

Could Surface Oncology Be a Millionaire-Maker Stock?

Why Surface Oncology Is Flying Higher After Hours Today