Please ensure Javascript is enabled for purposes of website accessibility
Log In Help Join The Motley Fool
Free Article Join Over 1 Million Premium Members And Get More In-Depth Stock Guidance and Research
By Anthony Di Pizio - May 28, 2021 at 8:02AM

The electronic documents business is bigger than ever, but it's not hitting the bottom line for DocuSign.

The year 2020 was big for emerging technologies, in some cases accelerating their growth trajectory as the pandemic pushed people into remote work. Most companies that delivered useful platform technologies garnered favor with investors, growing to dizzying market valuations as demand for their services exploded.

E-signature software company DocuSign (DOCU 2.74%) is an example of this phenomenon, and it likely has some staying power in the future. However, despite record levels of revenue, the company is losing even more money than before the pandemic. If 2020 was the peak of DocuSign's growth rate, investors may need to find a new reason to stay bullish. 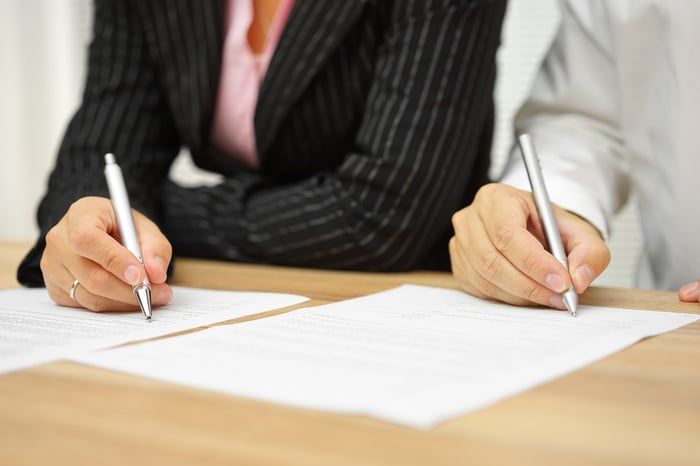 DocuSign offers more than just e-signatures, despite being the No. 1 provider in that area. It also offers a collaborative contract solution called DocuSign CLM, which allows multiple parties to edit legal documents live and at the same time. It's designed to speed up negotiations as sending documents back and forth between parties is a historically lengthy process.

The company also offers an artificial intelligence software called DocuSign Insight, which "reads" documents and contracts for the user and flags areas of concern based on previous inputs. DocuSign Analyzer is an extension of this, giving legal teams a quick way to identify contract clauses they might take issue with -- and integrates with Microsoft Word to make editing simple.

DocuSign charges customers for this suite of products on a subscription basis, and subscription revenue makes up over 90% of the total.

The "anywhere economy," as the company calls it, heavily favors DocuSign's product offering as it is entirely focused on shifting physical business tasks to electronic form. However, despite fast-growing revenue, the company hasn't been able to deliver a yearly profit.

Since the earnings picture hasn't improved much, investors appear to be buying the stock based on revenue growth. Revenue has grown almost 200% since fiscal 2018, but the stock is up 486% over the same period. The majority of those gains occurred between Jan. 2020 and today, indicating that the pandemic was a huge factor in the stock's popularity.

DocuSign added $479 million in additional revenue in fiscal 2021 compared to the previous year, but total expenses increased almost $500 million, which triggered the extra $0.18 in losses per share. The biggest increase in costs came from sales and marketing, where the company spent $208 million more last year than it did the year prior.

With a valuation of $38.6 billion, DocuSign stock trades at about 27 times trailing revenue, which is expensive for a company that is not just losing money but still far from turning the losses around. By comparison, Zoom Video Communications trades at about 35 times revenue, but it is profitable, and its stock has fallen 45% from its highs, suggesting investors are in the process of revaluing the company. Without delivering profits, it's difficult to see DocuSign shares appreciating in value any further from here.

Competition and the path ahead

A growing list of competitors is perhaps one of DocuSign's biggest hurdles. The main e-signature service it offers is easily replicable with large players like Adobe Systems integrating a similar feature into its software. In the private market, PandaDoc is one of DocuSign's most prominent competitors with a similar pricing structure and comparable core features. Software companies without a moat around their products and services always face the risk of new players taking market share.

As the economy reopens and workers return to the office, it's possible there is less demand for DocuSign's suite of products. E-signatures are likely to dominate the future as they're significantly more convenient, but they'll probably be a matter of preference rather than necessity going forward. DocuSign has proprietary value in its artificial intelligence, but it's unclear whether that's enough to carry the company.

DocuSign reports earnings on June 3, and investors should ask more of the company than just growing revenue. It needs to show some ability to convert revenue into earnings and further innovate to offer differentiated products and services.

Teresa Kersten, an employee of LinkedIn, a Microsoft subsidiary, is a member of The Motley Fool’s board of directors. Anthony Di Pizio has no position in any of the stocks mentioned. The Motley Fool owns shares of and recommends Adobe Systems, DocuSign, Microsoft, and Zoom Video Communications. The Motley Fool has a disclosure policy.