Please ensure Javascript is enabled for purposes of website accessibility
Log In Help Join The Motley Fool
Free Article Join Over 1 Million Premium Members And Get More In-Depth Stock Guidance and Research
By Reuben Gregg Brewer - May 29, 2021 at 9:04AM

The energy sector is in for big changes in the decades ahead. Which one of these high yielders is the better way to play the space?

ExxonMobil (XOM -2.62%) has a yield of 5.8% backed by more than 35 years of annual dividend increases. Enbridge (ENB -1.72%) has a yield of 7% with over 25 years of yearly dividend hikes. They are both energy companies, but they aren't interchangeable. Here's some important things to consider as you look at this pair of high-yield dividend stocks.

1. The middle or the whole?

Exxon is what's known as an integrated energy company, which means that it has operations that span from drilling for oil (upstream) to processing it (downstream), and everything in between. The hope is that this vertical integration will smooth out performance over time in what is basically a commodity business, since weak oil prices are usually a benefit to the downstream sector. This has generally worked out well over time, though the commodity nature of the energy sector can still lead to massive swings in Exxon's financial results. 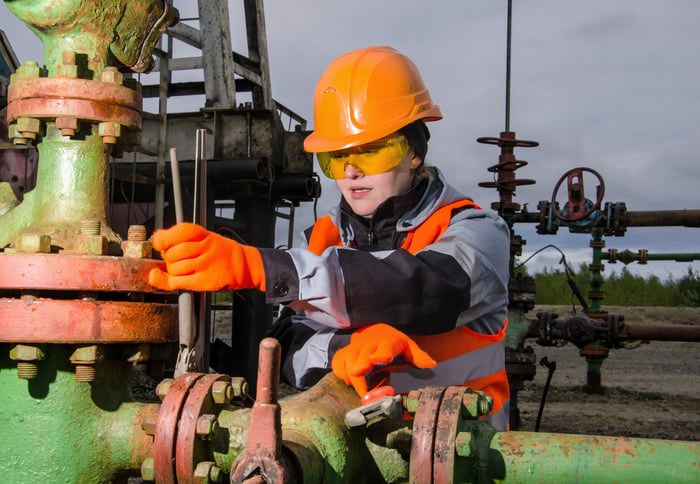 Enbridge is largely focused on helping to move oil and natural gas with its collection of midstream assets. Midstream is the connector between the upstream and downstream, and it is largely driven by fee-based contracts. It tends to be a very stable business compared to the other two. In addition to moving oil and natural gas, Enbridge also owns a natural gas utility operation and a growing renewable power business. So there's even more diversification in the mix here. These assets are also stable cash generators.

Neither Exxon nor Enbridge "win" here, but their very different business models could be a deciding factor in your choice of stocks.

2. Clouds on the horizon

One of the more interesting things in this comparison is actually found at the edges. The energy industry is under increasing pressure to clean up its act. Exxon acknowledges this but is really only dipping its toes in the water. It believes that oil and natural gas will be globally important energy sources for years to come, and that will provide ample support for its business.

Enbridge isn't exactly running into the water, fearing that investor enthusiasm for renewable power is too high right now. In response, it is taking a more deliberate approach and not lowering its return expectations even if it means not winning new deals right now. Although clean energy only has a 3% share of adjusted earnings before interest, taxes, depreciation, and amortization (EBITDA) today, the company still has a collection of offshore wind projects in the works that will grow this business segment while it awaits more rational industry pricing. It has also been deliberately working to increase its scale in natural gas for many years, given its role as a transition fuel away from dirtier coal. Of the two, Enbridge appears to have a better plan with regard to the paradigm shift that is taking place in the energy sector.

A dissident investor with a focus on environmental, social and governance (ESG) criteria just won two seats on Exxon's board. That could speed up the oil giant's plans in the clean energy space. However, it's still too soon to tell what will happen because of this board change, which could actually complicate things more than help in the near term. 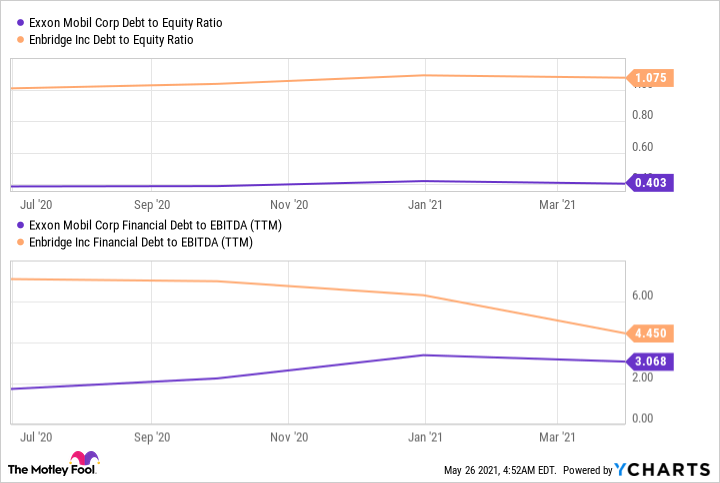 To be fair, Exxon's top and bottom lines are far more volatile because of the commodity nature of the oil drilling business. Thus, it makes sense that it would take a more conservative approach with its balance sheet. Enbridge's midstream operations, utility business, and contract-driven renewable power segment are far more stable, so it can afford to take on more debt. However, at the end of the day, Enbridge is more aggressive with its balance sheet (specifically compared to its peers), and that might turn some investors off.

Enbridge believes it can spend between $5 billion and $6 billion a year for the foreseeable future across its business. That, in turn, should support distributable cash flow growth of 5% to 7% per year. The dividend is likely to trail along slightly behind that number over time. That's not bad when you factor in the big 7% dividend yield here, potentially leading to double-digit returns. The counterpoint is that some key growth projects on the pipeline side of the business are facing headwinds, though they are likely to be completed just the same.

Exxon had big plans for growth a few years ago, but the 2020 downturn has left it pulling back its spending outlook. Although higher oil prices have solidified its ability to spend money, its current plans are more modest than before, and that suggests growth will be less than exciting. And the change in the makeup of the board is a major complicating factor that could end up pushing money away from high-return oil and toward ESG goals that may not be as rewarding. In sum, Exxon's future is far less clear right now.

So which energy giant is the better bet? There's really no right or wrong answer here since both Exxon and Enbridge are fairly well-run companies. However, of the two, Enbridge appears to be better positioned right now, even though Exxon's stock has risen dramatically because of the oil recovery. In fact, that just highlights the inherent risks of Exxon's commodity-driven business, which is by nature highly cyclical. Enbridge, with its higher yield and more deliberate approach to changing with the energy sector, is actually relatively less risky. While the pipeline operator is far from perfect, it's the name that dividend investors are likely to find more appealing today.