Please ensure Javascript is enabled for purposes of website accessibility
Log In Help Join The Motley Fool
Free Article Join Over 1 Million Premium Members And Get More In-Depth Stock Guidance and Research
By Steve Ditto - Updated May 29, 2021 at 11:42AM

Just like in poker, in some markets, the winner can take the whole pot. Can Invitae take home all the chips?

Well, probably not all the chips, but taking home most of them is certainly possible. Cathie Wood of ARK investment Management has described Invitae (NVTA -47.74%) as operating in a "winner-take-most" market, and identified Invitae as one of the most under-appreciated companies in her ETFs. Invitae is a top 20 holding across the ARK Innovation ETF (ARKK -3.20%) and ARK Genomic Revolution ETF (ARKG -2.01%). Does it belong in your portfolio too? 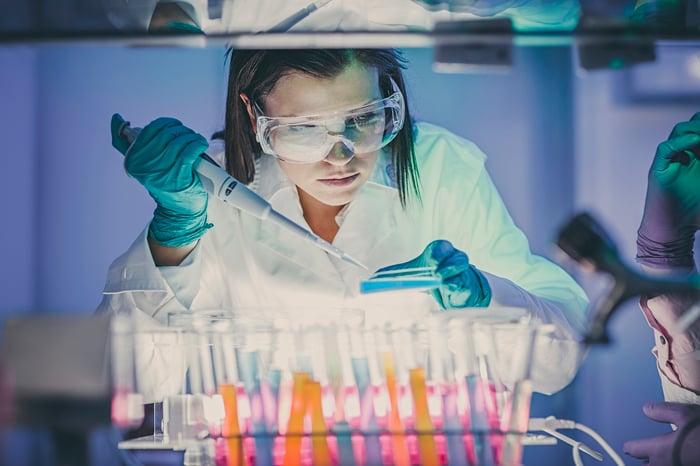 What is a winner-take-most market?

The long term profitability and success of any company is highly dependent on the market in which it operates. Many markets have low barriers to entry; many sellers offer undifferentiated products, and profits are driven down by the forces of competition. Think of almost anything you see on a grocery store shelf.

Other markets, in particular technology sectors, can tend toward "winner-take-most." Think Facebook in social media, Amazon in e-commerce, Netflix in streaming, and Alphabet in search. Many factors lead to this highly desirable (and profitable) market position, including being a first mover, technical innovation, network effects, switching costs, and barriers to entry. Investing in the eventual winner of a "winner-take-most" market can do wonders for your portfolio.

Why exactly is Invitae so under-appreciated?

To maintain profits, many biotech companies choose to target specific niches where they hope to keep prices high and maximize profitability for as long as possible. As a result, healthcare innovation can be very expensive and cause rationing of care, since only a limited number of patients can afford the innovative drug or therapy. Rationing and profit maximization can be great for investors, but aren't ideal for people who can't access unaffordable tests or treatments.

Invitae is taking a fundamentally different approach with a mission "to bring comprehensive genetic information into mainstream medicine to improve healthcare for billions of people." Rather than picking a single genetic variant to test at a cost of more than $1,000 each, Invitae is building a testing platform to identify several thousand genetic variants at a cost below $250 for the entire test panel. This atypical approach to biotech innovation is what has led to much of Invitae's under-appreciation.

Can the Invitae business model work?

Rather than looking to biotech for the answer to this critical question, the better analogy may be semiconductors and software. Just as Intel and NVIDIA have relentlessly improved the price and performance of their processors, companies like Illumina are doing the same for DNA next generation sequencing (NGS). Similarly, just as Microsoft and a host of other software companies built applications on top of Intel and NVIDIA's processors and servers, Invitae is building applications on top of NGS to create valuable insights from the data.

NGS creates a lot of data. Traditionally, data scientists and clinicians would sort through NGS data to find variants and other genetic insights. These review processes were labor intensive and often required long turnaround times. Finding valuable insights could seem more like art than science. These days, NGS data are increasingly being managed by artificial intelligence (AI) engines, which are able to more quickly and accurately process the "big data". The Invitae application is designed to handle the increasing volume and complexity of NGS data management and analysis.

To be truly useful, once analyzed, the data then needs to be interpreted and reported in a way both physicians and patients can understand and act upon. Invitae has created the Clinical Report Optimization Platform (CROP), which helps researchers and clinicians rapidly assess a genetic variant and ensure the analysis is based on strong scientific evidence. Invitae has also built portals for physicians, patients, families, and genetic counselors to make the testing data easier to understand and guide their actions. These downstream applications are critical for broad adoption of genetic testing and ultimately create an opportunity for Invitae to grow from data management and testing to becoming an information service.

Unfortunately for investors, it can take an abundance of time and money for markets to develop and the competitive advantages of particular companies to become readily apparent. 2021 has been a hard year for Invitae investors, with the stock down over 50% from its 52-week high. Invitae's mission to bring affordable testing to the masses will likely take years more to play out, and may require more capital, which will dilute current investors and push out the timeframe for potential returns.

For patient buy-and-hold investors, the wait should be worth it. One in six people have a genetic variant underlying their health condition, and Invitae projects the market opportunity for its services to be more than $150 billion. With $280 million in 2020 revenue, Invitae still has a very large opportunity ahead of it. As Cathie Wood pointed out, the genetic diagnostic market seems to be following a "winner-take-most" pattern, and Invitae is assembling the pieces to be the big winner. For all the people in the world in need of affordable genetic testing, let's hope Invitae's under-appreciated bet pays off.